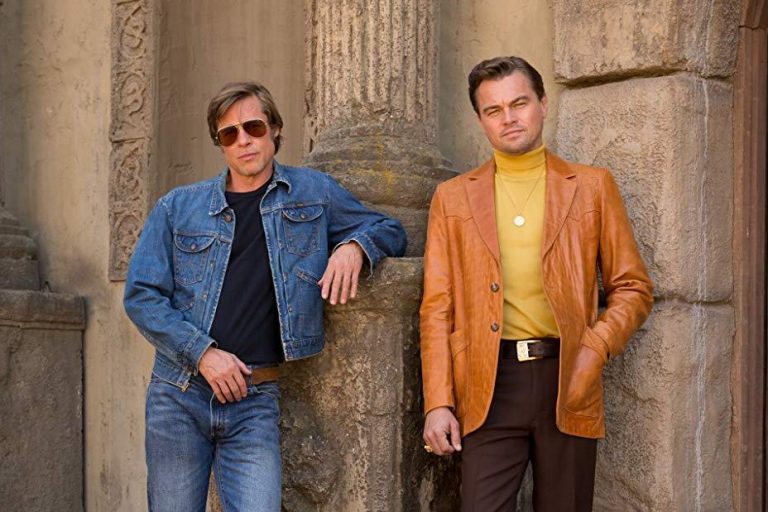 KARACHI: The use of long tracking shots following cars and characters, acid-laced cigarettes, characters meeting at the roads and sidewalks, colorful dresses and a lively outdoor culture, of time-relevant pop music and radio – these are some of the countless details that made the latest Quentin Tarantino film Once Upon A Time In Hollywood as close to the 1969 Hollywood as it could be.

The plot of the film is narrated from the perspective of Rick Dalton (Leonardo DiCaprio), an actor whose fame is slowly fading, and his stunt double Cliff Booth (Brad Pitt) who might or might not have murdered his wife. The friendship between them is what’s driving the story. From the opening scene where they are being interviewed up until the violent fight with members of the Manson ‘family’, a real life cult from the 60s led by Charles Manson, they stick with each other through thick and thin.

Actress Sharon Tate (played by Margot Robbie) is extremely famous and successful, riding around the city with her husband Roman Polanski. She doesn’t have as many dialogues in the film as her co-stars, only because she doesn’t need them. The character is beautifully written, with Robbie bringing it to life with her charisma and non-verbal gestures.

The movie is Tarantino’s tribute to the golden era of Hollywood and it revolves around the industry, more than the Manson Murders that shook it. The end of the swinging ‘60’s marked the murder of Tate in the real world. But did we expect Tarantino to not mix facts with fiction while telling his version of the story? No, because he loves crafting his own alternate reality.

In the film Inglorious Basterds, he depicts the ending of the World War in which the basterds kill Hitler along with all his senior ranking officers. In Django Unchained, the freed slave takes vengeance from his former masters. Tarantino doesn’t just alter reality to give unrealistic happy endings, because none of his climaxes are unrealistic. He simply shows us what else could’ve happened instead.

Tarantino also used subtle tricks and tools to connect reality with his alternate version, and by doing so rewrites history. In one scene he shows Rick shooting for a Western TV program, that was a real show back at that time. The equipment remains off-screen as much as possible, showing the scene as continuous to the story, more or less as he would’ve shot it himself. In another scene, Tate goes to a cinema to watch one of her films, where we see her watching the real Sharon Tate on screen.

Bruce Lee is portrayed negatively in the film, but what most people didn’t notice was that the scene with Lee was a memory flashback playing in Cliff’s mind. So the portrayal of Lee was Cliff’s perception, not his reality.

In another scene, leading to the climax, a few members of the Manson family are sitting in a car outside Rick’s house. They are there to “to kill those who taught them to kill”, implying that films create violence. Tarantino has been fighting this notion all throughout his career, and by making a bunch of murderers mention this, he is making a statement that people who are already violent would see violence in everything.

The stunning cinematography by Robert Richardson and Harry Cohen’s dense soundtrack binds everything together. The movie is surely a treat for the eyes and a brilliant addition in Tarantino’s movie universe.