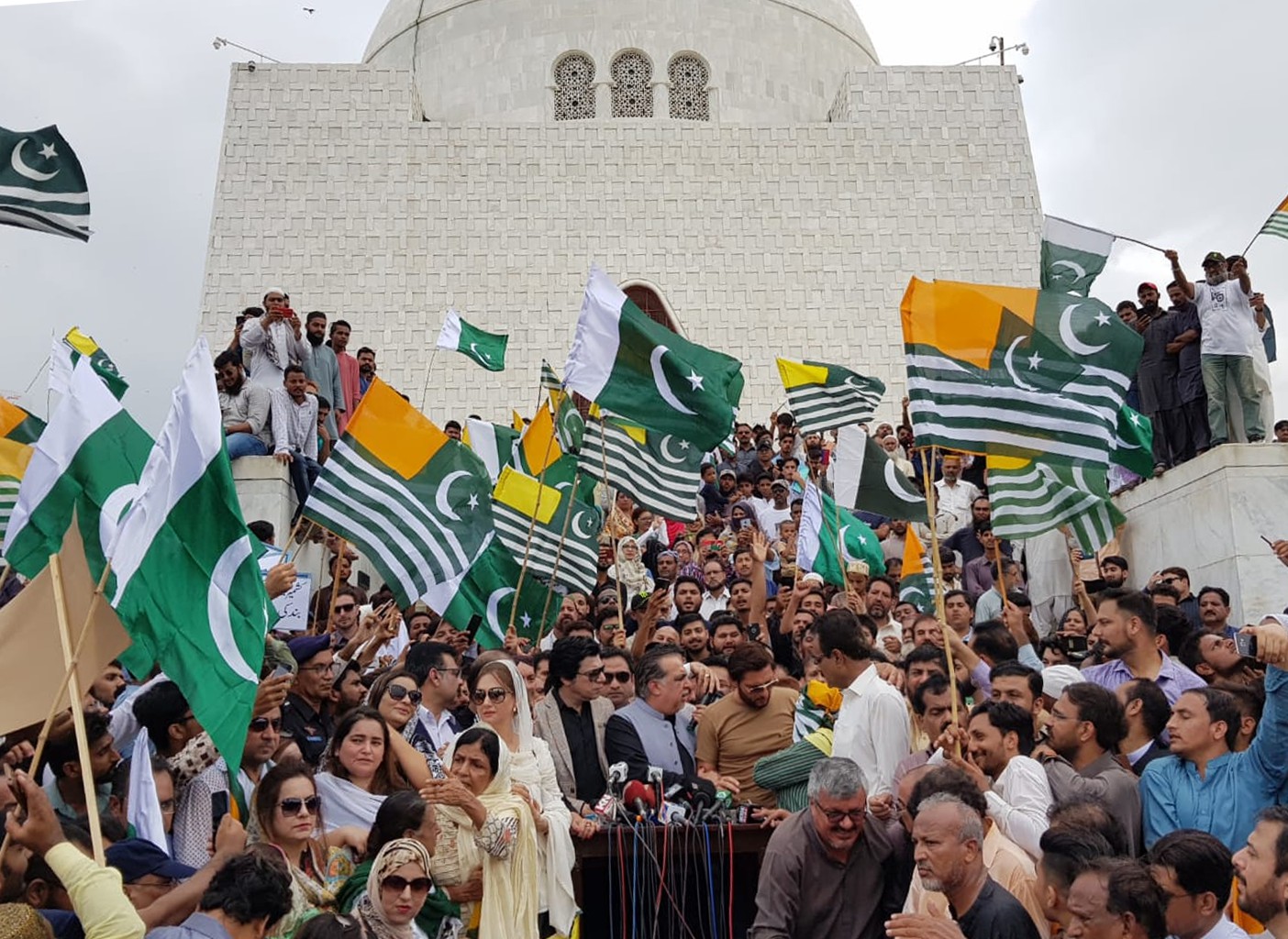 KARACHI: Pakistan’s Prime Minister requested in his address on Wednesday for all Pakistanis to come out on Friday during 12-12.30 pm to show solidarity with the people of Indian Kashmir. He reiterated the request in a series of tweets yesterday.

Read: Documentaries and books that will help you understand Indian Kashmir

the daily injuring & killing of Kashmiri civilians, incl women & children – all part of the ethnic cleansing agenda of the Modi Govt. & it's illegal annexation of IOK. The plan to change demography of IOK is a war crime under 4th Geneva Convention.

We must send a strong message to Kashmiris that our nation stands resolutely behind them. So I am asking all Pakistanis for half an hour tomorrow stop whatever you are doing & come out on the road to show solidarity with the Kashmiri people.

Since his posts, there was an overwhelming flux of Pakistanis taking to the streets to peacefully protest against the harsh conditions faced by Indian Kashmiris that is now trending on Twitter by the name of #KashmirHour. All over Pakistan, in Lahore, Islamabad and Karachi, roads have been blocked by protesters to show Kashmiris that “they are not alone against Modi’s facism.” According to Radio Pakistan, special prayers will be offered for the Kashmiris after the Friday prayers.

#KashmirHour trending worldwide. Images of peaceful protests across Pakistan. A message of solidity. And PM IK who is not treating Kashmir as a territorial claim; rather speaking for the freedom of the people of Kashmir according to their own wishes and what they want. Wow.

The hashtag #KashmirHour by trending worldwide, is showcasing the turnout and live updates of the protests in accordance with PM Imran Khan’s public request.

Scenes from D-Chowk, outside the Parliament. Pakistanis have gathered together to show Kashmiris that they are not alone in their struggle against Modi’s fascism. #KashmirHour pic.twitter.com/HuDbQJ9nu1

People during the #KashmirHour at PMO. Pakistan’s message can’t reach Kashmir as of now due to the blackout, but the message must have surely reached Delhi; Pakistan will NOT back down from the Kashmir cause. pic.twitter.com/7eqGeShoaN

A loud and clear message from the people of Pakistan “WE STAND UNITED WITH KASHMIR”#KashmirHour pic.twitter.com/LQZwkf2twU

Wowww incredible crowd. Thank you Pakistan, thank you Islamabad for being so beautiful and welcoming #KashmirHour pic.twitter.com/ra0HhwABNP

Unexpected people's coming out from there homes for Kashmir #Kashmirhour pic.twitter.com/AGPKzrCLFl

What a loud and clear message from Pakistan on PM @ImranKhanPTI call that we all stand with the people of #Kashmir and will keep raising their voice across the world. #KashmirHour pic.twitter.com/gtQchnPs0c

A tender age when kids around the world play in the streets, kids in Kashmiri either face lockdowns or end up losing their lives. Let’s join hands to send out a compassionate message to our brothers and sisters in Kashmir that we feel their pain & we are with them #KashmirHour pic.twitter.com/SSvlKEbK0p

Historic scenes from PM secretariat. It takes a leader to unite a nation; & today Pakistan stands united, in solidarity with Kashmir. A leader who is not fighting for territory, rather an ambassador for the freedom of the Kashmiris from Modi’s Nazi like brute force.#KashmirHour pic.twitter.com/0hLAms5I7m

Stepped out of my house with my dad!
Was great to see how people responded to PM's call.. Young children, old uncle and aunties, everyone drenched in rain, gathered at Seaview to express solidarity with their Kashmiri brothers and sisters. #KashmirHour pic.twitter.com/XwkXItA7KD

Kashmir moments for Kashmir movement traffic has been stopped for half an hour in whole pakistan.#kashmirHour pic.twitter.com/rmQ17qH2Rm

No matter what anyone says, I'm happy ppl went out to show solidarity with besieged Kashmiris. These grandmothers, a few of them Kashmiris themselves, led the way at Lalik Chowk (got photo from my boss). Sincerity of emotions is always better than hollow cynicism. #KashmirHour pic.twitter.com/OWPTkv28nt

Chitral comes out to show that Indian aggression will not be tolerated in Kashmir anymore. We stand with Kashmiris!#KashmirHour pic.twitter.com/6VUuz3Za7G

Jinnah Avenue Islamabad, I couldn't resist myself from sharing the efforts of kids#KashmirHour pic.twitter.com/KNVZuDmBje

Today Qaid e Azam Muhmmad Ali Jinnah will be feeling happy that for what he had made this country, that idea has reawaken now.#KashmirHour pic.twitter.com/n87qQWnoSA

Residents of Askari 10 outside their society protesting against Indian atrocities peacefully without disturbing traffic. This is unprecedented they all are common people who are coming out on their own.#KashmirHour pic.twitter.com/ko8wBBLK5T