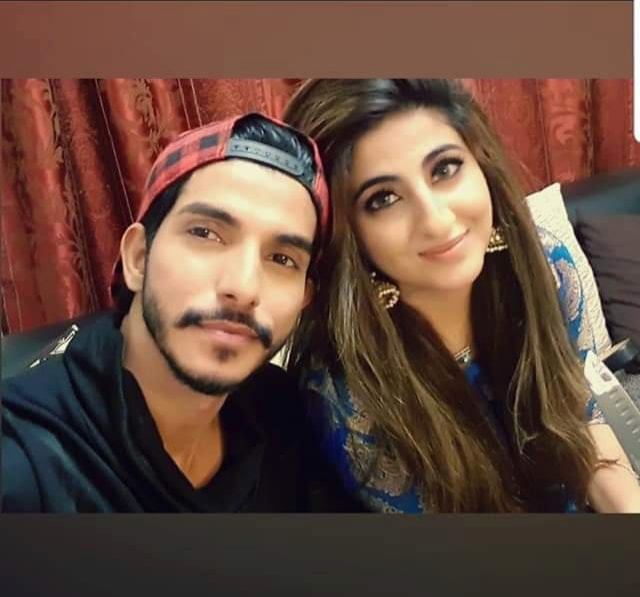 KARACHI: Na Maloom Afraad actor Mohsin Abbas Haider has been accused of domestic violence by his wife Fatema Sohail. In a detailed post published on Saturday, she wrote of her experiences being married to him and how he laid a hand on her countless times, including while she was pregnant with their son. 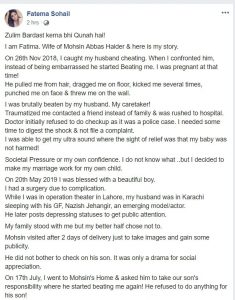 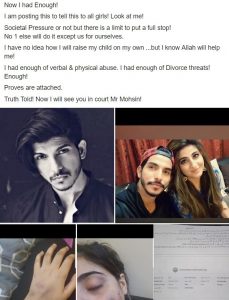 Fatema also accused Mohsin of infidelity. In her post, she claimed he was having an affair with model Nazish Jehangir. Nazish took to Instagram on Sunday giving her explanation and concern over the entire situation. She claimed that she does not deserve the hate that she has been receiving from the public and being accused by people of being a home wrecker.

Other side of the book …! #stillinshock

Mohsin Abbas also broke his silence on the matter in a press conference he held in Lahore on Sunday. The actor said that their wedding happened in ‘the heat of the moment’, and wasn’t supposed to happen in the first place, and that his vulnerability of having lost his mother aided in him making the “wrong decision” to marry Fatema. He added that at that time he believed it was reassuring to see this woman travelling a long distance to offer her support and felt that she would be helpful to him in moments of grief in the future as well. The actor also clarified that they both agreed on the belief that they did not get along or share any ‘mutual understandings’. The actor then progressed into speaking about the lies and threats that came from his wife to ruin his career and make him penniless. He also claimed that she was using “the woman card”.

The news has predominantly caused an outrage against Mohsin and many celebrities have lashed out on Twitter to condemn his behaviour, with some giving witness accounts of Mohsin beating Fatema and them taking her to the hospital.

If you raise your hand at women in your life you are scum. End of story.

Sick to my stomach. What gives anybody the right to raise their hand on anyone? Nothing. No excuse.
For eons now we have normalised abuse (of all kinds) and for the sake of our children this needs to stop.

#MohsinAbbasHaidar Have never met her but everything Fatima Sohail/Gohar Rasheed said is true. He told me abt it as Fatima's frnds including him were trying to help her as she went to the hospital after being beaten up by Mohsin while she was pregnant with Mohsin's child. (1/3) pic.twitter.com/qkrn8N7tOX

#MohsinAbbasHaidar Thr is absolutely no religious/cultural/emotional/psychological/any othr excuse for beating your pregnant wife. We need to make a horrible example of Mr Mohsin for all those men who dare raise thr hand on the female servants of Allah & try to justify it! (2/2)

#MohsinAbbasHaidar Having been a witness to all this, Fatima Sahiba speaks the truth. Disappointed to see Mr Mohsin's response. At tht time she was pregnant, traumatised, wantd to save her marriage, stayed silent. I am glad Allah finally gave Fatima strength to speak up. (3/3)

I've been staring at this screen, grappling with the images I saw, trying to form a coherent sentence.
…
There is a special place in hell reserved for anyone who would lay so much as a finger on a woman.
You cannot justify abuse.
It is indefensible.
I am sick to my stomach.

Here’s an honest question and you must answer truthfully to YOURSELF, not to anyone but you: How many women do you know in your own family/friends (extended and close) who have been abused (physically/Verbally) and you ignore it. Have your answer?#domesticviolence #societalissue

What #MohsinAbbasHaider has done is despicable. Domestic abuse is a crime and perpetrators should face the full wrath of the law. We can’t tolerate this in our society. BUT we are also to blame for turning a blind eye for so long even though we see it happening … 1/2

We need to be doing all we can to protect the victims of this hidden menace. Abuse is one thing but his response had me in shivers … proves that he’s totally unstable. I pray that he gets the help he needs. 2/2#FatimaSohail #MohsinAbbasHaider #ZulmBandKaro

I’m a witness ! @DuaMalikk use to call me and tell me how painful it was for her to listen to Fatima sohail and her suffering from pain it’s been 3 years … I wish Fatima did this before what she did now

Dear men,
Before you even think abt hitting your women, JUST DONT.
There is no excuse, no validation, nothing u can offer that in ANY way makes this okay.
We are stronger than we look & we will fight back.
Silence is not, was not & never will be an option.

You guys might not know the ‘other side of the story’ but sadly some of us do. So wait all you want to hear your beloved response. But I will not stand people like these in the society & the least I can do is speak up.

You know all the fame you get, all the hard work you put into your work, that body you keep working on, those sleepless nights of shooting and working hard don’t pay off when you’re a piece of shit! #TimesUp pic.twitter.com/phRxQpPnYg

Fatima like so many others,needs help. Am available in Islamabad at any point to meet and take this up. Many legislators feel very strongly about abuse and domestic violence. We worked for years on the lawmaking against it. Please feel free to DM me to coordinate any response https://t.co/RboiOwaxiX

Body building might make you a strong man but raising your hand against a woman disqualifies you from being a MAN.
We do not need to hear what was on your mind neither your side of the story.#TIMESUP

The injustice that took place with #FatimaSohail, I was a second hand witness to it in 2018 when my friend took #Fatima to the hospital after she had been beaten up by #MohsinAbbasHaider Through her I got to know the whole Story. Fatima is like a sister to me (1/3)

SHE, wanted to save her marriage and ensure the health of her baby so we respected that and kept quite but now since she is out with the truth her self (more power to you #fatima) (2/3) #justiceforfatima

I wanted to say that men like these are a threat to the society I don’t see him just as a spineless, pathetic sick human being , I see him as a danger. She needs justice and he needs HELP. #justiceforfatima (3/3)