According to some hardliners, the ad which shows a friendship between a Hindu girl and Muslim boy is promoting 'Hindu phobia' 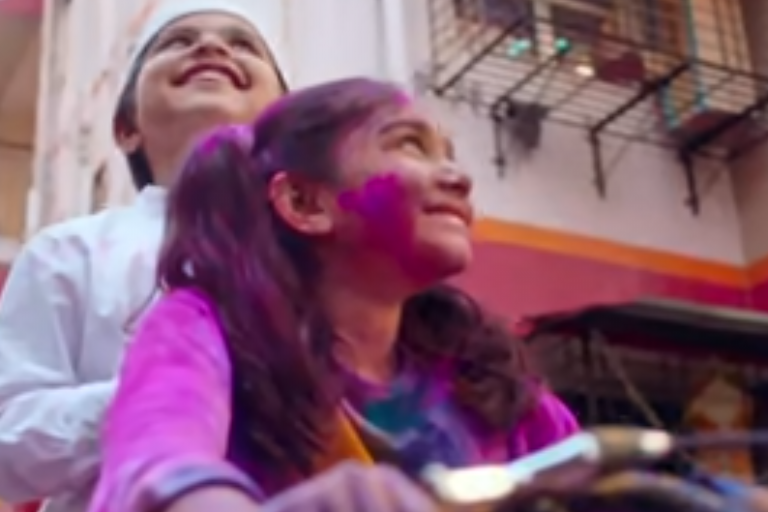 KARACHI: An Indian advertisement which celebrates interfaith harmony is not sitting well with some people in India.

The Surf Excel af shows a young girl celebrating Holi with other children in her neighbourhood. She asks the kids if all the color has finished and cycles her way to pick a friend who is seen wearing a white shalwar kameez. They ride on the bicycle together and she drops him off at a mosque.

The boy says, “Namaz parh kar ata hoon” (I will return after saying my prayers) and girl replies saying, “Baad main rang parega (you will get hit by colors later).” The feel-good ad complimented with a melodious and catchy jingle, the message is loud and clear: about Hindus and Muslims living co-existing in harmony.

But despite being loud and clear, the message wasn’t received well by all.

Hindustan Unilever is facing severe backlash for what is being perceived as promotion of Islam over Hinduism by some hardliners. Some critics have gone as far as to say that the ad is promoting “Hindu phobia”.

Yes I've already started the #BoycottSurfExcel #BoycottHindustanUnilever #BoycottHULproducts in my family until @HUL_News withdraws that obnoxious ad and apologises. No dearth of brands in the market. Such direct & indirect #Hinduphobia must be countered.

#BoycottSurfExcel Either you roll back this ad immediately @HUL_News or you'll certainly be out of my house. Remember, it is not the India of 80s or 90s when you had monopoly in the market. We can easily and swiftly kick you out.

#BoycottSurfExcel has been trending on Twitter for the past 48 hours with others calling on to boycott Unilever products altogether. Some have gone to the extent of identifying all the products one needs to be mindful and calling for a complete ban.

Here is the picture, you need to check before buying anything… #BoycottSurfExcel @HUL_News Leave Hindus alone. Make ads on other religions because WE are not interested in your products. pic.twitter.com/3TxWoFux4e

Communal Ads by @Unilever should be withdrawn immediately and an apology for hurting Hindu sentiments should be issued or else We all should #BoycottSurfExcel 😡 https://t.co/i41yRNQp7e

The advertisement already has more than 9 million views on YouTube.