Elephant Kavaan in Islamabad zoo to be released upon condition 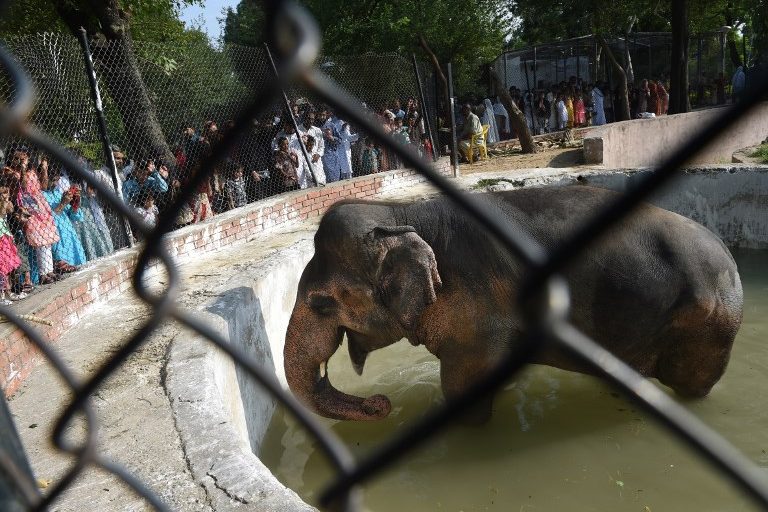 KARACHI: Kavaan, the lone elephant at Marghazar Zoo in Islamabad, will be released into an animal sanctuary.

The Metropolitan Corporation Islamabad (MCI) has decided to let go of Kaavan, given an international charity organisation they are in touch with helps with the development of the zoo, according to DAWN.

According to the Chief Metropolitan Officer Syed Najaf Iqbal, the zoo is currently looking into the offer and pushing the international charity organisation to be clear on the zoo upgradation plan. “In principle we have decided to release Kaavan,” he said, DAWN reported.

According to One Green planet, a website focusing on environmental stories, Pakistan took in Kaavan from Sri Lanka in 1985 when he was one year old. He was separated from his herd and since then he’s been kept in Islamabad zoo in chains. His plight came into attention in 2012 when his only partner Saheli passed away due to intense neglect. Kaavan has been subjected to the zoo’s apathy, forced to live alone in a small, enclosed space.

A lot of concerns have been raised locally when it was learnt that the animal has been living in solitary confinement and dirty environment for the entertainment of visitors. International animal rights campaigners led by Animal Welfare Worldwide took it upon themselves to convince the zoo and to let him go to a sanctuary.

In November 2018, it was reported by local news outlets that Kaavan may after all get his freedom. According to SAMAA Digital, the director of Islamabad zoo had said that if his medical examination showed he is suffering from medical illness, he would be released and if he was found alright, he would stay in the zoo. If freed, he would be moved to a wildlife sanctuary in Cambodia.

The international charity organisation had met with the government in November and offered to improve the condition of the zoo as well.

Support for Kaavan has been pouring in from around the world even before the news broke.

Its a ransom demand from what I can gather. Not only is a sanctuary supposed to take in kaavan, it also has to fund the zoo? How does that make sense? I am guessing the sanctuary relies on donations and now they r expected to dole out cash to Isb zoo.ridiculous.

@SPCAINT please transport #kaavan the elephant from Pakistan to a sanctuary. He's spent more than half his life chained in a zoo with no proper care. Please help him out of this misery along with a bear in the same zoo.

I fear Kaavan will die in prison.😢🐘

Is it still a blessing for poor #Kaavan, who resides in an barren open shelter, chained and left in temperatures well below that which his DNA dictates. Allow him autonomy and freedom to sanctuary… please!!! #FreeKaavan pic.twitter.com/z4xxsK8q7v