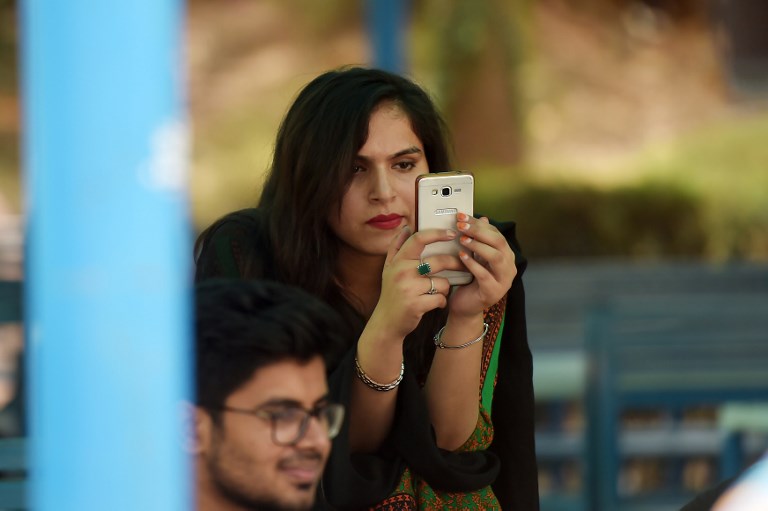 A student uses her mobile phone at a campus in Islamabad. PHOTO: AFP

KARACHI: Pucho Pakistan is a trivia based quiz game application that was launched on both iTunes and play store on Friday (November 16).

The brain child of Swaleha Alam Shehzada and Nadeem Hussain, Pucho Pakistan is an attempt to attract the younger population to the history and potential of their country.

Speaking to Cutacut, Shahzada said her first instant of inspiration was when she came across the story of the first South Asian astronaut to go into space, Namira Salim. When Shahzada heard about Namira, she was astonished as to why more people aren’t talking about it. She started asking friends and family whether they had heard about her and no one seemed to know of this Pakistani born astronaut and her accomplishments.

The disappointment that set in following this was what made Shahzada believe that there was a need for something that interests Pakistanis to celebrate their history, culture, and heritage. She believes that we as a society lack information about our own potential, and she was determined to do something to bridge this deficit.

Read: The power of social media in Pakistan

Shahzada along with her partner on the project, Nadeem Hussain, started brainstorming potential ideas to engage the populace, while educating them about the historic accomplishments of their country.

Hussain had initially proposed a board game to be developed and both of them started building categories and themes for the game from history, to literature, to the politics of the country.

“At this point, we did not know the logistics of developing the game, what it would cost us, and how long it would take to develop into something tangible that people could engage with,” said Shahzada.

When the categories started coming along, it became clear to both of them that it would have to be more complex than a board game. At this point, Shahzada also brought interns on board who worked on the questions around the categories that they had developed. Noreen Sharif and Shehroze Shaikh , students from the department of social sciences and liberal arts at IBA, Karachi, started working wholeheartedly for the project.

“What struck me most about the content research for Pucho Pakistan was how methodic and organised the whole process was. Our tasks changed hands multiple times during the process and yet there was never any lag because of how organised everything was. Most importantly, it was a learning experience. So much of the content that went into the game, I wasn’t aware of half of it; now I know these random pieces of trivia that I can randomly throw into conversations and annoy people with,” said Shehroze while talking to Cutacut about his experience of working to develop the game.

Further emphasising on the collective effort, Shahzaad said, “The venture could not have been possible without the team’s effort”. Their youngest contributer was an 11 year old, Shahbano Hamidi, who kept spirits high during working hours. Other team members included Marvi Malik, Zoya Mooraj, Nadir Hamidi, and Sanah Baig Hashmi.

“It really was a team effort. I couldn’t have possibly taken up the task without Nadeem’s support, and the team that later got on board took the project to its completion. It was a learning effort for all of us, even the developers,” Shahzada continued. When the developers started compiling the game, they realised it was more complex than they had anticipated. According to DevBatch, a developing team based in Lahore, this was the first ever trivia game that was being developed in Pakistan, with the level of complexity that the game required. As a result, the process was not just a learning experience for the OMLG team, but also for the application developers.

“We started almost two years ago, and launching the game, we hope that the targeted audience can learn from it, take pride in their historical accomplishments, and cherish the potential that this country holds,” Shahzada ended on an optimistic note about what she hopes the game will accomplish.

The launch is still being monitored for any technical bugs that may come about but the team seems hopeful at this point. They will market the application later this month to reach a wider audience.