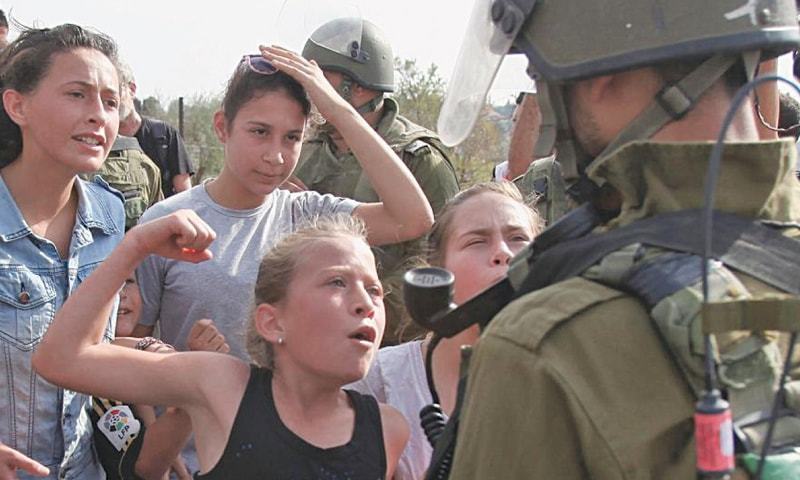 Ahed Tamimi, then 11, raises her fist at an Israeli soldier in this file photo taken in 2012. PHOTO: AFP

KARACHI: Symbol of Palestinian struggle Ahed Tamimi was honoured by the football club Real Madrid in Spain where she was given the jersey of the team with her name printed on it.

Tamimi was visiting Spain to attend political events when on a short notice, she was invited by Real Madrid, according to Haaretz. Tamimi came into the limelight after she was sentenced nine months in imprisonment for slapping an Israeli soldier.

In Spain, at the team’s home stadium Santiago Bernabeu, she met Emilio Butragueño who is the former forward and current senior manager of the club.

While many praised the club for hosting the symbol of resistance in Palestine, others criticized the gesture and asked what it had to do with the values of soccer.

“The prestigious soccer club of Real Madrid embraces a terrorist inciting to hatred and violence. Shameful,” he wrote on Twitter.

After her release in July, Tamimi went to various countries to spread the message of her struggle. However, in the beginning of September, Israel imposed a travel ban on her and her family.

Despite that, Tamimi and her father visited several countries for political events where she was seen speaking. Just last month, Tamimi was in Greece, where she addressed the crowd at the festival of a Greek political party, according to Russia Today.