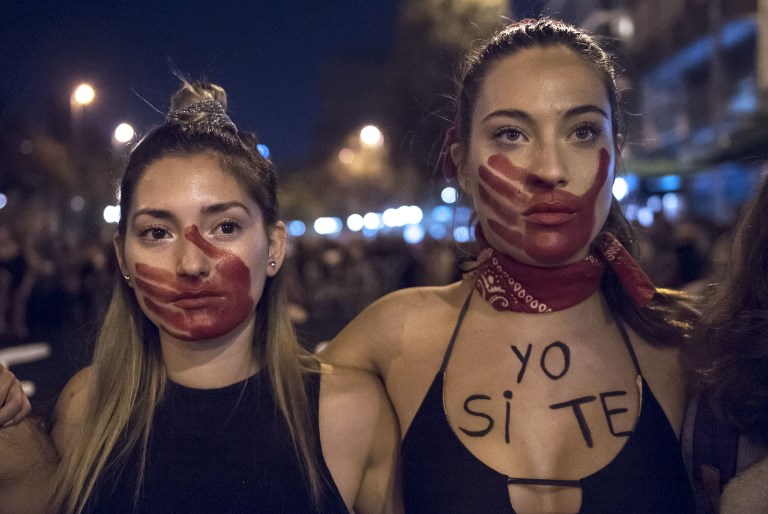 Women take part in a march called by the movement “Ni una menos” (Not One Less) against violence against women in Santiago, on May 11, 2018. Hundreds of high-school students protested Wednesday in downtown Santiago to demand a “non-sexist education” in a wave of demos against sexual abuse and for a higher inclusion of women. / AFP PHOTO / Martin BERNETTI

KARACHI: Fear of shame, of disgrace and of consequences  is why most sexual abuse and harassment survivors choose to remain silent.

Voicing one of the most popular critiques of the #MeToo movement, United States President Donald Trump took to Twitter to challenge the veracity of psychologist Christine Blasey Ford’s accusation against Judge Brett Kavanaugh. He said she would surely have reported the assault to police “immediately” if the attack was “as bad as she says”.

I have no doubt that, if the attack on Dr. Ford was as bad as she says, charges would have been immediately filed with local Law Enforcement Authorities by either her or her loving parents. I ask that she bring those filings forward so that we can learn date, time, and place!

His tweet didn’t go down well with social media and rightfully so. In the aftermath, the hashtag ‘#WhyIDidntReport’ began trending on Twitter in the latter part of last week as survivors came forward with their own reasons.

These are some of the most heart-wrenching stories:

1. “Have you been drinking; what were you wearing?” asked the police when I called to report.

When I called the police the first question was "Have you been drinking?" Followed by "What were you wearing?" I hung up. #WhyIDidntReport

#WhyIDidntReport I was ashamed. When I finally told an adult I was told it was probably my fault. I was 12.

#WhyIDidntReport He was my father, and I thought I had to protect the family from scandal. He disowned me for my unwillingness to actively lie about it, pretend all was fine. This is my 1st public statement of it and it terrifies me even though he's long dead.

4. “Because my parents have a favourite child.”

Because I knew which of us my parents would choose. #WhyIDidntReport

#WhyIDidntReport Because I was sexually abused at such a young age I didn't even know it was a crime. I didn't have the language to say what was happening to me. Later, as a teen, the sexual harassment and coercion of girls & women was seen the norm, not something to report.

“I was sexually assaulted as a teen. Here’s why I didn’t report.”

7. “I was traumatised, terrified, embarrassed.”

#WhyIDidntReport I was 10 he was an old man at the community pool. I was traumatized, terrified, embarrassed. I lived in an abusive home. Who would believe me? No one cared. So I endured nightmares, disassociated out of body. No one noticed. 51 years ago.

8. “I was afraid my dad would be embarrassed because I should’ve known better. “

Because I was drinking, I was a virgin, and my dad was a cop. I thought he’d be embarrassed because I should’ve known better #WhyIDidntReport

#WhyIDidntReport
It was happening to me in my own house for years.
When I was 15, I did report – to my mother. She did nothing.
35 years later- still nothing….

Because I didn’t want to lose my job or make people think I was a drama queen. #WhyIDidntReport