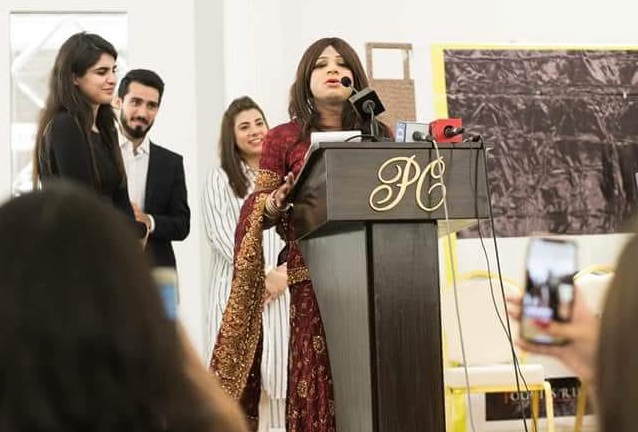 Khushbo during the graduation ceremony of Gender Guardian. PHOTO: KHUSHBO

KARACHI: A few days before some 17 transgender students were to graduate from Pakistan’s first trans college, Gender Guardian, they were cheering for the history they were about to make. Sadly, the happiness was short lived.

“We saw on social media what one of our fellow transgender person in Sahiwal went through when she was set on fire. The fear hit us again ,” says Khushbo, 24, who graduated from Gender Guardian where she did a beauty and driving course along with receiving formal education.

“We were reminded that we are not accepted in this country. The celebrations were marred by the incident, just like our lives which are destroyed every time we try to do something. It doesn’t matter if we study or obtain skills,” she says.

Read: Sex is between our legs, gender identity is in our head: Kami Sid

Khushbo’s parents died when she was very young. Her brother is of ailing health which is why she had to become the breadwinner for him and his children. Today, she works tirelessly yet manages to scrape only Rs14,000 per month.

“I work hard while also studying so that my nephews, who now depend on me, don’t think ill of transgender persons. I don’t want them to think that trans people do not work and can’t earn a living,” Khushbo continues. She lives in a small house in Lahore where she also has a separate room for social gatherings with her trans friends. “It is there that I can invite my sehaliyaan (friends) and we can share our sorrows with each other,” she adds.

Our media team has covered it all: from Abrar-ul-Haq's mesmerizing stage presence, to Dr Amjad Saqib and Kami Sid's…

Posted by The Gender Guardian on Sunday, September 9, 2018

Khushbo, who received a diploma certificate, thinks her struggle can make a difference in a society that looks down upon her community.

“I request people to support me and my clan. But if they can’t do that then at least they should stop teasing us and just leave us alone,” Khushbo says. She shares the degree of humiliation she has to endure on a daily basis. Not only do men catcall but sometimes they snatch away her dupatta and steal her money when she is simply walking down the road.

Despite the hardship, Khushbo is looking forward to giving her matriculation examination next year and intends on pursuing further studies. “I want to dismiss the notion that transgender people can’t get an education,” she notes.

Khusbho is one of the 17 graduated students that make up the first batch of Pakistan’s first all-transgender-persons school Gender Guardian.