It's as easy as celebrating Valentine's Day 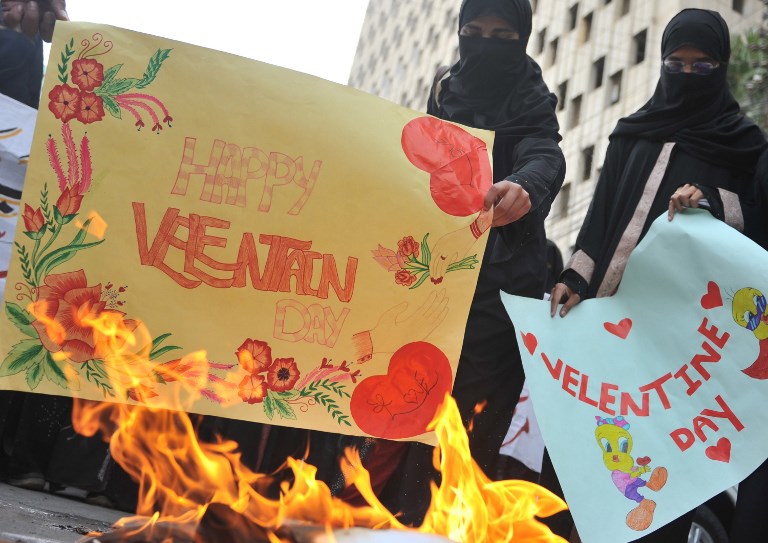 A demonstration against Valentine’s Day celebrations in Karachi. PHOTO: AFP

KARACHI: Pakistan Electronic Media Regulatory Authority (Pemra) has a long history of censoring content on television and unless they’re banning Aamir Liauqat for the hateful comments he makes on live television (which don’t work because he manages to make his way back), often their bans make no sense. One of the biggest priorities on Pemra’s agenda is making sure that our TV plays are ‘halal’ and family friendly. That means, not touching upon sensitive issues, not offending the State, not showing intimacy on screen among other things. Here’s basically all you need to do to get banned:

Read: Where are these ‘bold’ TV dramas PEMRA wants to ban? Asking for a friend

1. Go out and celebrate Valentine’s Day

In 2017, Pemra issued instructions to all TV channels to refrain from airing any programme that promoted Valentine’s Day. To be fair, they were simply following orders of the Islamabad High Court. Still, if you’re looking to be banned, wear the brightest shade of red and tell someone you love them.

On several occasions, Pemra has warned our drama industry against ‘bold’ and ‘indecent’ TV serials. Ten points to anyone who can guess what bold and indecent mean. By indecent, do they mean that we shouldn’t be ill-mannered and burp, for instance, on live television, or something more extreme, like sex scenes? By bold do they mean we shouldn’t be brave and courageous and do something like not stand for the rights of minorities, for instance? Or are they specifically talking about the way women choose to dress on television.

But since it hasn’t been made clear, we’ll simply refrain from burping and speaking up for minority rights. Unless one wants to be banned. Then do the opposite.

The one time our TV dramas decided to use their voice for something important, guess who had a problem with it? Starring Ahsan Khan, Farhan Saeed, Urwa Hocane and a myriad of other talented actors, Udaari was the first TV show to start the conversation on child sexual abuse that is so rampant in the country, Funded by an NGO, the TV play was sensitively written; it aimed to highlight a true story too. However, Pemra was the first to issue notices to the producers to demand an explanation for some of the scenes.

If you’re part of the LGBTQ community, congratulations. You’re already there. Kitni Girhain Baaki Hain, starring Sania Saeed and Farah Shah, was one of the first TV shows to depict a lesbian relationship on TV and was immediately received with notices from Pemra apparently due to public outrage at the show’s content.