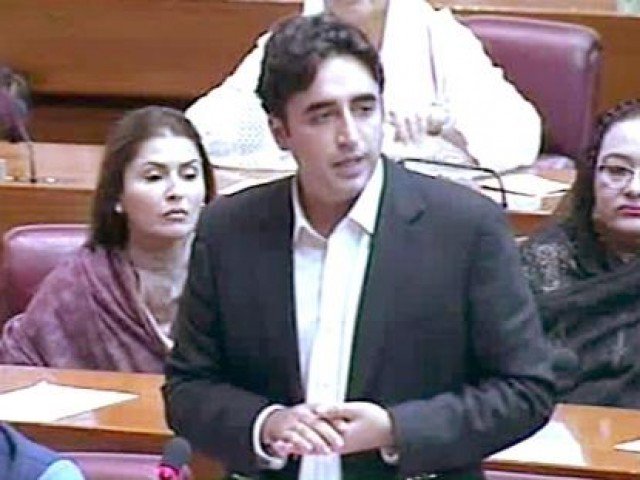 KARACHI:  The National Assembly session on Friday, when the newly elected Prime Minister of Pakistan Imran Khan took oath, kept people glued to the live transmission on their television sets to see what their leaders have to say.

Bilalwal’s maiden speech in the house was nuanced, balanced and mature as people gave their verdict on Twitter and other social media platforms. Not only did his speech sound more mature than others, even his acts did too. When Pakistan Muslim League-Nawaz (PML-N) MNAs staged a protest against the PM-elect, Bilawal left his seat and went to convince the party leaders to stop making the ruckus. It was in vain though, but the act spoke volumes of Bilawal’s maturity.

A number of journalists in the country took to Twitter to hail his speech and admired his words:

Well said @BBhuttoZardari. Excellent speech. No jazbati antics, no reactive rhetoric. Shahbaz should accept what has happened. IK is PM. Period. Also time for IK to come down from the container. A change of tone and words are in order.

Arre wah. Bilawal Bhutto is the most mature member of the National Assembly at the moment.

Excellent speech by Bilawal Bhutto Zardari today. It was more prime ministerial than Shehbaz Sharif and Imran Khan combined. However that does not absolve his party from the disastrous decision of abstention.

The only time when the house is quiet and people are actually listening…impeccable manners demand pin drop silence. Proud of u @BBhuttoZardari

In his first speech in the NA, Bilawal urged the new PM to represent not only his party and supporters but also the people ‘he cursed and called donkeys’. He asked Khan to do away with his politics of intolerance now. “Masses are now looking at Imran Khan to resolve the issues of the country. He is not a party leader anymore… he is the leader of Pakistan ,” Bilawal said.

He also reminded the speaker of the house and the prime minister that if PPP had not supported them and become part of the democratic process, they would not have been in the house with their seats.

Towards the end of his speech, Bilawal congratulated Khan by calling him ‘PM-select’ instead of ‘PM-elect’,  again implying the possibility of mass rigging in the election process.

On the other hand, Khan’s speech did not match the nuance that was there in his post-polls speech. For instance, he warned his opponents by challenging the PML-N to hold a sit-in, saying he will provide them with the containers.

Not quite surprisingly, people criticised Khan for the speech he made by saying that it reminded them of his old style, the one used during PTI rallies:

If this speech is a measure of how Imran Khan handles stress, then we are all screwed. Day one as prime minister and he's deriding the opposition, hurling threats, taking potshots at the PMLN, and absolutely not sounding like the leader of change we all hope he will prove to be.

Why is Prime Minister Imran Khan reproducing a speech from his rallies?