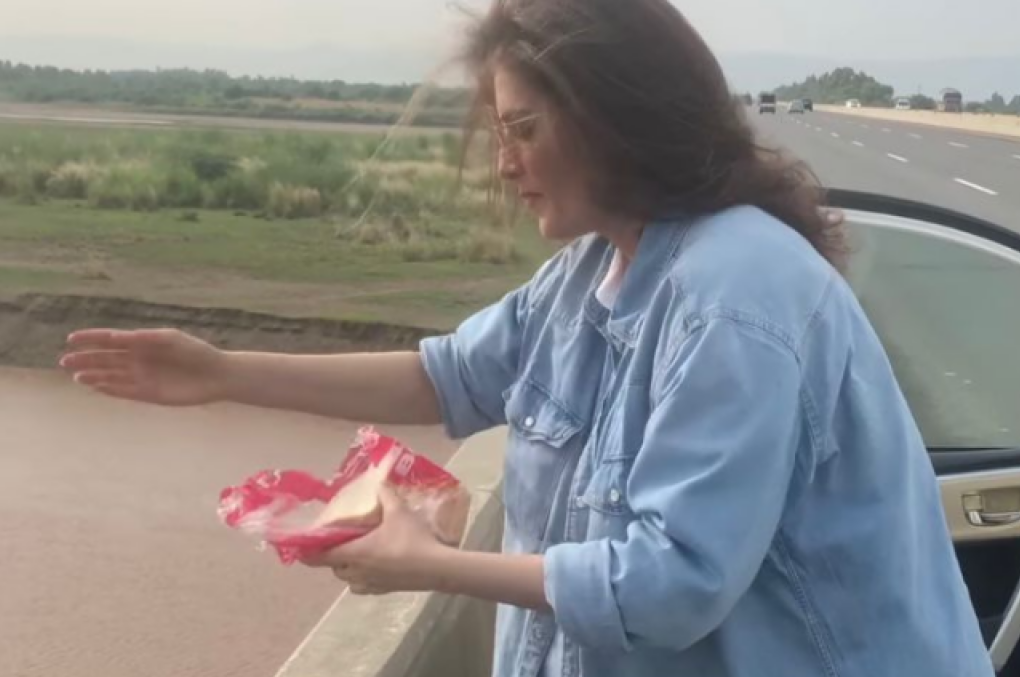 KARACHI: A bizarre video of Resham has recently been making waves on social media. The actor, who has seemingly stopped her car on a busy highway, can be seen throwing chunks of meat and slices of bread into a river. As if that in itself is not confusing enough, much to the horror of many, she goes on to throw the plastic wrappers into the water as well!

People who watched the video of Resham had quite a few questions that they wanted answered. The first and foremost was who was she throwing meat into the river for? Surely not the fish. And more importantly with the floods causing a severe shortage of food, the bread she threw into the water could have been given for human consumption.

Agreed! This video gives me anxiety.
1. Feeding the fish that plastic too???
2. Dawn Bread(ok I ignore meat) to be fed to ‘fish’ while humans are crying for a single piece of roti even.
3.Donation with such display?
Who made them celebs?🤦‍♀️#Resham https://t.co/9KVDLoHsEv

Many were horrified at the fact she threw the plastic in the water, especially considering how efforts are being made around the world to reduce plastic to save the lives of aquatic animals.

Hello Madam! What if we feed you with plastic? By the way, animals do not eat plastic. #PlasticPollution #Resham https://t.co/RZqexlA4U5

#RESHAM are you insane. The whole world is banning plastic to save sea life and you throughing plastic like this. Such an uneducated person you are don’t even know trash goes in trash cans not in a lake, sea or pond. Dumbo https://t.co/L1MIYppLBV

Criticism was also directed towards Resham for feeling the need to capture the entire fiasco of a “good deed” on camera.

Who throws meat and plastic rubbish in to a flood and disease affected river?
On Camera !
And thinks they are doing a good thing?
I’m so lost 😞😫

After the video went viral for all the wrong reasons, Resham finally spoke up and offered her side of the story. Speaking to The Friday Times, she admitted her mistake but also added a caveat, “I admit to having made a mistake by dumping plastic into the flood water but women are gang raped everyday.” She went on to say, “Violence against women is commonplace, yet, everyone’s blinded by a piece of plastic. They are dwelling in a fool’s paradise. I was merely offering sadqah (charity).”

Resham also revealed that she lost her brother recently and has been struggling with mental health issues as well as post COVID effects, “I tested positive for Corona twice and I happen to be absent-minded because of that.” Hitting back to the criticism over claims that she was showing off in the video, Resham said, “I am in Charsadda as we speak. I have been quietly helping thousands affected in the calamity-hit district. But of course, people are only interested in trolling me. I do a lot of good too. I have an enviable, 600,000 people following me just on Facebook. That’s more than enough publicity for me.”