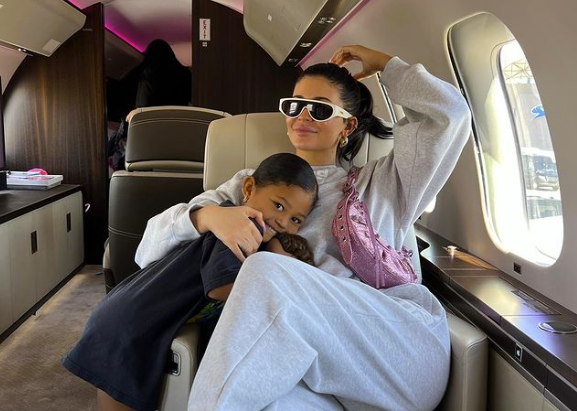 KARACHI: The KarJenner clan isn’t known to be the most responsible group of celebrities. Their career’s foundation has been scandal and since then, whether its promoting dangerous beauty standards or being called out for their cultural appropriation, they always manage to anger people. As of late, Kylie Jenner is being criticized for her carbon footprint after it was reported that she took 3 minute long flights on her private jet.

The 24-year-old business mogul is being labelled as a “climate criminal” after a Twitter account called @CelebJets, which tracks celebrity flights revealed her plane route which showed she flew 17 minutes to avoid a 45 minute car drive. And as per the Twitter account, this isn’t the first short plane ride she has taken. Some rides are as short as three minutes long and that has obviously angered “ordinary people.”

However, it seems as though Kylie Jenner is unfazed about the questions surrounding her incredibly short flights. Almost as though she was taunting people, she posted a black and white picture of herself with Travis Scott about to board a private jet for yet another flight. Her picture was accompanied with an infuriating caption that read, “You wanna take mine or yours?”

As the world has to come to terms with the fact that climate change is a serious problem that has to be addressed and have had to make changes to reduce their carbon footprints, it seems as though the rule doesn’t apply to the rich and famous. Private jets have been found to emit two tons of CO2 in just one hour. So much so, the Transport and Environment had reported in May 2021 that they are five to 14 times more polluting than commercial planes.

Normalise shaming billionaires for flying in private jets because that shit emits in a one hour flight what a car emits in a whole entire year hhhhh https://t.co/JjPJLyRb4o

For many, Kylie Jenner and her flights are prime example of how the working class will continue to make sacrifices while the rich will live in a bubble unaware of the consequences of their actions.

Oh but I must cycle to work , use paper straws, limit beef consumption in order to reduce my carbon footprint? https://t.co/suuIHUOK1v