Purana Pakistan: A tale of a Houbara Bustard, a Nazim and a cold blooded murder 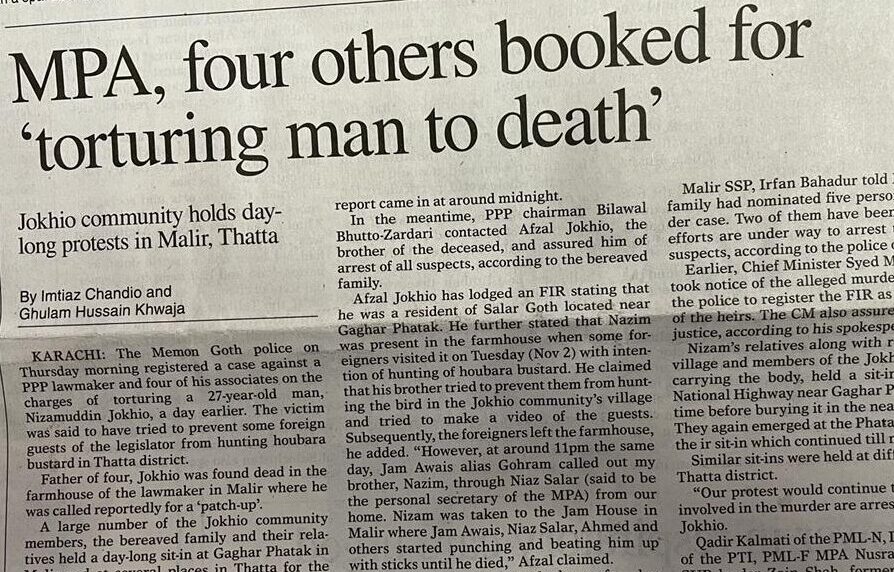 Karachi: As Pakistan was flung into political turmoil and the PDM proudly celebrated the ousting of then Prime Minister Imran Khan, one statement remained etched in our minds. It sent chills down our back and for all the wrong reasons because when Bilawal Bhutto welcomed us back to purana Pakistan (old Pakistan) we were reminded of all the crimes and injustices that were associated with it. Before we could even try to put the fear off as paranoia, all our fears were validated as the case of Nazim Jokhio came into the spotlight.

Who was Nazim Jokhio?

Nazim Jokhio was an ordinary man, just like you and me. But this ordinary man possessed a great deal of courage. Courage that would cost him his life.

In November 2021, Jokhio, a journalist and an employee of District Council Karachi, had stumbled across foreigners, hosted by PPP MPA Jam Owais Khan Jokhio, hunting the Houbara Bustard. While hunting the bird is banned in Pakistan, special permission has been granted to Arabs to hunt the bird whose meat they believe has aphrodisiacal qualities. Jokhio, who was quite active on social media, had filmed the party all while asking them why they were doing what they were. Caught on camera was the PPP MPA who went on to whack the camera out of Jokhio’s hand.

With all this debate about sovereignty did we ever wonder what was motive behind killing of #NazimJokhio? He made video & had altercation with a foreign guest of MNA Jam Karim & in return was tortured to death in JAM house. To appease a foreign guest a citizen was bludgeoned. pic.twitter.com/MLJdChXooJ

The next video that Nazim Jokhio posted was one where he revealed that he was on the receiving end of threats by the “influential” person who had been playing host to the hunting party. However, he stood his ground and said in the video, “I am not afraid but this video statement of mine should be kept on record. I am receiving threats and I would not seek an apology.”

Jokhio never made a third video. Instead, he was found dead at the farmhouse of the man who he caught on camera. An autopsy would later reveal that Jokhio had been severely tortured in the final moments of his life. His entire body, including his genital area, bore witness to the trauma he endured.

How did Jokhio end up at Jam Owais Khan’s farmhouse? As per his brother, Afzal, the two of them had been summoned to the farmhouse by the PPP MPA. It was clear he was planning to reprimand Nazim for his actions. When they got there, Nazim was allegedly assaulted and held back while Afzal was ordered to leave the premises.

Do you think @BBhuttoZardari believes in democracy and the rule of law? If that was the case then why has he not held his MNA/MPA accountable?

Hours later, Afzal was called back to the farmhouse where he learnt that his brother was dead. The natural course of justice would involve the police showing up at the accused’s house and arresting him. Only that did not happen. Instead, the police waited two days for the MPA to present himself at the station.

If you think that is bad, it only gets worse from there onwards.

Afzal Jokhio was the one to file the case against the accused. The village stood by him and there was an outcry for justice. Which the chief justice of the province had promised. But that justice never came.

Only a week later the accused was detained, Afzal complained that the lack of progress in his brother’s case was deliberate and that the quality of investigation was subpar, at best. He also complained about the pressure that was being put on him to drop the case.

His complains might have been heard and he might have gotten a new investigation team but two days later, Afzal withdrew the case completely. The brother might have stepped out, but a new person took the lead and that was Nazim Jokhio’s widow who wanted to avenge her husband’s murder.

It seemed as thought the one institution that was meant to grant justice was as helpless as Nazim Jokhio had been in his final hours. For you see, from 22nd December 2021 onwards it seemed as though the paperwork that needed to be presented which included the interim charge sheet, was just not being presented. Then the case bounced from court to court. In February 2022, it was announced that the case would now be tried in the Anti Terrorism Court.

On February 8th, the Investigating Officer was ordered by the court to file a challan with the ATC but three weeks later, nothing was done. By March 2nd, Nizam’s widow, out of sheer desperation filed a case in the Sindh High Court, and accused the prosecution of delaying tactics. She also pleaded that the court’s orders be followed since she was also subjected to extreme pressure. She hoped that once the charges would be filed, she would no longer be used as a bargaining chip.

However, that is exactly what happened. By the end of March, the fearless widow eventually withdrew her case. The courts failed to follow through normal procedure and she was at the mercy of the killers. So for the sake of her children, she stopped fighting.

Other than PPP MPA Jam Owais Khan, his brother, Jam Abdul Karim who is PPP MNA was also accused of the crime. Throughout the (lack of) court proceedings, the accused enjoyed better class jail facilities. Unlike most murderers, they were not presented to the court in handcuffs as that would have been humiliating for the chief of a tribe and an elective representative.

Despite an ongoing murder case against him, Khan was granted protective bail and was allowed to take a leisurely trip to Dubai to unwind. Why was he being given preferential treatment?

Well you see, the accused were important men. The MNA’s vote was vital in ousting Imran Khan in the no-confidence movement. Murderers were celebrated and adorned with the ajrak, all for political aspirations. And so in the course of upholding the constitution, a man’s life was deemed worthless.

Will Nazim Jokhio receive the justice he deserves? It is difficult to say.

And with that, we welcome you back to purana Pakistan.