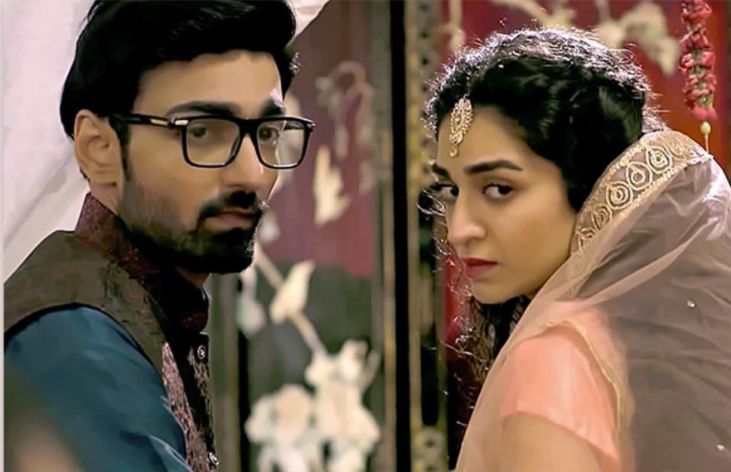 KARACHI: Living in a conservative society where topics such as sex are as taboo as can be, making a film on the topic needs tact and that’s exactly how Khushkhabri Kay Baad has handled the topic. The short film by Angeline Malik stars Hajra Yamin, Saleem Mairaj, Hassan Raza and Nazli Nasr and hilariously touches upon why people need to practice safe sex and the dire need for family planning.

The short film begins with Hajra Yamin marrying Hassan Raza. She’s married into a family of 8 siblings, with her husband being the eldest. From the get-go, she learns how the mere concept of privacy is unheard of in a small house with such a big family. From kids hiding under her bed and using her bathroom to her mother-in-law storming into the newlyweds’ room to use their charger, it is complete and utter commotion on the one night that’s meant to be just theirs.

Exploring their newly married life, the couple decide that they want to wait a while before having kids. In between the 7 kids already present in the house to both of them expecting a promotion soon, it makes sense for them to want to wait. As a pleasant surprise, the short film does not hold back when it comes to talking about sex. From a hilarious scene that mirrors every awkward encounter men face whilst buying condoms to the horror of kids mistaking the contraceptive as balloons, you can’t help but laugh because it is all so relatable.

But there is also a more serious side to the film. While the young couple is being responsible, the mother-in-law gets pregnant for the ninth time. Hajra Yamin plays the role of a doctor in the short film and tries to make her in-laws see reason that falling pregnant at this age is a health risk. However, her words fall on deaf ears as Salim Mairaj plays the typical Pakistani who believes that family planning is a sin and a man is only a man if he has a huge family. Mairaj also deserves a special mention for his performance in the film. His expressions are on point and to no surprise, he adapts the role with utter ease.

Khushkhabri Kay Baad is a must watch. It’s funny, eye opening and deals with a topic that needs to be talked about!