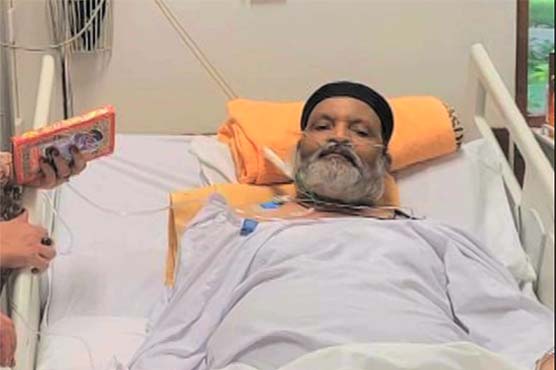 KARACHI: On September 14, Sindh government had sanctioned Rs.40 million for Umer Sharif. The amount included an air ambulance which was required to fly the veteran comedian to the US, where his treatment was supposed to be continued. On September 28, Umer Sharif finally made it to the air ambulance that was supposed to travel from Karachi to Washington, but had to make an emergency landing in Germany due to the artist’s deteriorating health.

Scenes from shifting Legend Umer Sharif From Pakistan to USA for treatment.
Arrangements was made by PPP Sindh Govt.@BBhuttoZardari @BakhtawarBZ @AseefaBZ pic.twitter.com/PGFUoz5WRA

Accompanying Umer Sharif on the air ambulance was his wife Zareen Ghazal, both of whom have been granted a 15-day visa by Germany on humanitarian grounds. The ambulance is said to have made an emergency landing after Sharif suffered from fever.

This is not the first time that Sharif’s travel to the US has been postponed. Only a few days ago, his flight had to be postponed due to his poor health. Sharif underwent a dialysis during which his blood pressure dropped. After staying in the Critical Care Unit (CCU), he had been declared fit for travel after which he boarded the plane on September 28.

The whole nation has been praying for the comedian’s health while Pakistani artists such as Reema Khan have extended more than just verbal support. Khan’s husband, Dr. Tariq Shahab is set to perform Umer Sharif’s surgery once he arrives in the US.