A look into all of Minal Khan’s wedding outfits

From her bridal shower right down to her Valima, here is a breakdown of all that the actor wore during her week long wedding festivities. 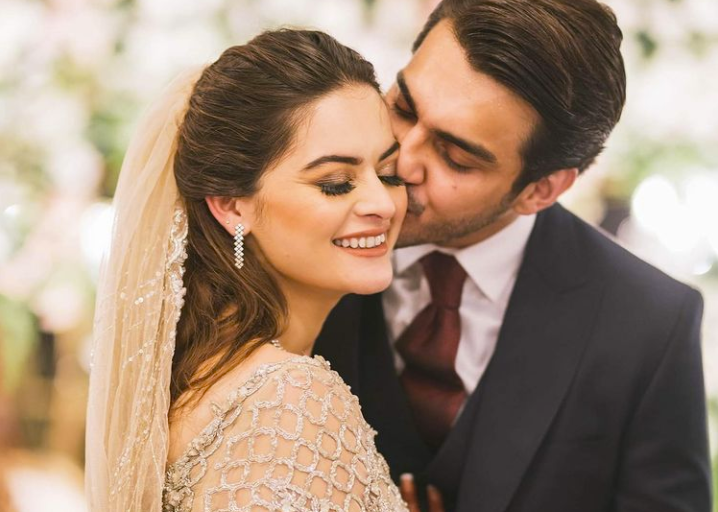 KARACHI: With the Valima marking the end of Minal Khan and Ahsan Mohsin Ikram’s wedding festivities, we aren’t sure if we’re ready to say goodbye to all the excitement just yet. And so, we decided to make a compilation of all of Minal Khan’s looks. From what she wore to who she wore, here is your summary…

Minal Khan kicked off her wedding events with a small but sweet bridal shower event at home. A pink and gold theme set up with Khan’s closest friends by her side, what better way to kick off the festivities. Khan’s friends, including her sister Aiman Muneeb, were all wearing matching night suits with “bride squad” etched on the backs. Khan, on the other hand, wore a pink night suit with “bride to be” written on it.

No soon after, came the second event of the Minal Khan wedding week, which was the mehndi. Khan sported the typical mehndi colors and wore an orange and gold sharara and wrote, “I felt so happy in this happy color.” What makes the outfit even better is the fact that Minal lent her support to fellow actor Maya Ali and wore an ensemble from her newly launched fashion line, Maya Pret a Porter.

If you plan on looking for the outfit, you’ll find it on the fashion label’s Instagram page by the name, “Taabir.” The dabka work on the shirt and dupatta and the simple gold finish on the bottom of the dress made it look regal but minimalistic at the same time.

Minal Khan made sure to channel a traditional bride by wearing all the traditional colors on her wedding events and so it’s no surprise that she chose to wear yellow on her mayoon.

However, this time she chose to wear one of her own creations from the AimanMinal Closet. She chose to wear a gharara with gota work on the shirt and on the gharara itself. You can also see a peek of green on the lining of her dupatta.

Arguable the baraat is the most magical day of any girl’s life and Minal Khan looked like a dream. For this event, she chose to wear designer Annus Abrar and was donned in a traditional red bridal suit with a bit of orange to add to the color palette.

As per the designer’s own description of Minal Khan’s outfit, she was wearing a “festive red bridal pishwas, farshi sharara and handcrafted kaamdani and zardozi dupatta.”

With so much glitz and glamour throughout the week, fans were excited to see what the final Valima look would entail and Minal Khan did not disappoint.

Khan’s off-shoulder bridal dress with its long train, which was adorably carried by her niece Amal, was none other than an Erum Khan Couture creation. The ivory and silver color scheme proved one thing and that was pastels never looked better than they did on Minal Khan!

And there you have it: a complete showcase of what Minal Khan wore on her wedding events. Congratulations to the newest couple in town.