Zainab: The voice beyond Karbala

A female historian, revolutionary, and commander in chief who ensured Karbala was documented, preserved for generations to come. 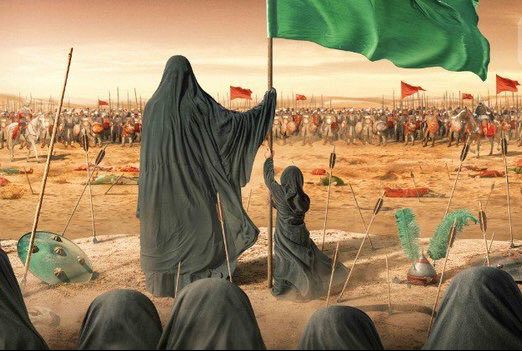 KARACHI: Karbala is a book of lessons. While valor, patience, courage, restrain, and loyalty are frequently talked about, one thing that transcended the events of Karbala was a woman’s voice. Had it not been for that woman, Karbala would have been shrouded in mystery. Had it not been for that woman, we would have no idea, 1400 years after the tragedy, as to just how significant Hussain’s sacrifice is for both, Islam, as well as humanity. That woman is Zainab bint-e-Ali (A.S), the third child to Hazrat Ali and Hazrat Fatima, maternal granddaughter to the Holy Prophet PBUH, and Imam Hussain’s sister who stood by him through it all and took on his message following his martyrdom in Karbala.

Known for her memorable sermon in the palace of Yazid, Zainab ensured the public knew of the horrors that unfolded on the sands of Karbala. Attempts had begun to mask Hussain’s martyrdom as simply an action taken against an anarchist by the state. Propaganda reigned as the high and mighty not only attempted to rid the then Islamic empire of anyone who opposed them, but also wanted to ensure history was somehow re-written in their favor, turning their ills into their glory.

Opposing this very propaganda, the mistreatment of the people of Kufa, Hussain, along with his companions and Hashmiites, embarked upon travel to Kufa, whose people had been sending him invitation letters. Hussain’s arrival would ensure their safety and allegiance to the Ahle-Bayt, who the people of Kufa looked up to as their protectors, both spiritually as well as physically. However, after a failed attempt at murdering him at the Ka’abah, Mecca, Yazid sent a battalion intercepting Hussain’s caravan just outside of Kufa in a desert called Karbala on 2nd Muharram, with the water supply cut off, the caravan ran out of water by the 7th of Muharram. On the 10th Muharram infantries after infantries arrived, and the day ended with nearly all men, except a few, slain. This included Hussain’s own family and himself.

The events of Karbala occurred after Hussain refused to swear allegiance to Yazid’s caliphate as, according to him, Yazid’s actions did not align with humanity and Islam.

Standing by his side through it all till Hussain’s martyrdom in Karbala was his sister, Zainab. Right after the beheading, the army infiltrated the area where the camps of Hussain’s family had been set. Plundering, looting, murdering, physically assaulting women and children, and burning the belongings of the martyred alongside their camps began right that day.

It was then that Hazrat Zainab assumed control, she picked up a broken Alam (a banner that says the kalma, held by the flag bearer of a Muslim army), and became a leading figure. She rescued Ali-ibn-al-Hussain (the only surviving son of Hussain who went on the become the fourth Imam among the twelve, from inside a burning tent. She then nursed the wounded, consoled the widows and orphans, and promised to stand by them. Her promise depicts her resilience. While she herself lost her own two sons, her brothers and nephews to Karbala, her leadership qualities shone through the strength of her actions.

Her role as a historian, a journalist – someone who defeated the propaganda began right after the 10th of Muharram. Taken captives alongside the survivors of the battle, Zainab and the women of her family had their headscarves stripped away, jewelry snatched, paraded barefoot from Karbala to Kufa, and then all the way to Damascus, Syria, where a dungeon awaited them. During this journey, the food and water were scarce, and the heads of the men of the family, mounted on spearheads would accompany the bareback camels they were seated on, hands tied to their back. During this time, about forty young children fell off those very camels because their mothers could not hold them properly.

If you think it’s emotionally devastating to listen to the maqtal of Imam Hussein (a), imagine what it was like to witness it and experience it!

The oppression that the family of the Prophet (s) endured is unfathomable!

It was during these parades that Zainab took her role in reporting to the people of Kufa and Syria about what had happened in Karbala. A number of them pelted them with stones, threw hot water on them assuming all their men did was betray and rebel against the state. Not many of them actually knew that the person killed was none other than the grandson of the Holy Prophet PBUH. Zainab took the responsibility of enlightening them. To date, her sermons are regarded as brave and empowering. It shows just how much of an impact a woman can have, in spite of being captivated in chains, having gone through the miseries of a slain household. 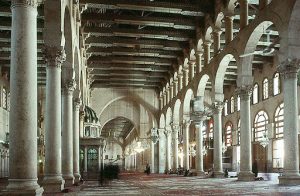 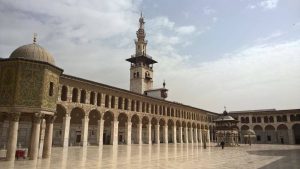 Through a door called Baab-e-Sa’at, the captives were brought into Yazid’s palace, present-day Ummayah Mosque in Damascus. Mocking Zainab at her situation, Yazid hit the lips and teeth of Hussain with his stick while saying: “I wish those of my clan who were killed at Badr, and those who had seen the Khazraj clan wailing (in the battle of Uhad) on account of lancet wounds, were here.” It was then that Zainab delivered the famous sermon that styled her as the “Hero of Karbala”.

In the name of Allah, The most Gracious, the most Merciful. All praise is due to Allah, the Lord of the worlds. May praise and salutations be upon my grandfather, the leader of Allah’s messengers and upon his progeny. O Yazid! Do you think that we have become humble and despicable owing to the martyrdom of our people and our own captivity? Do you think that by killing the godly persons you have become great and respectable and the Almighty looks at you with special grace and kindness? You have, however, forgotten what Allah says: The disbelievers must not think that our respite is for their good We only give them time to let them increase their sins. For them there will be a humiliating torment. (Quran 3:178)

Karbala is not a battle to know, Karbala is a lesson to learn. pic.twitter.com/lZtDwxUR3u

O son of the freed ones! Is it justice that you keep your women and slave-girls in seclusion but have made the helpless daughters of the Holy Prophet ride on swift camels and given them in the hands of their enemies so that they may take them from one city to another. It will be the day when Allah will deliver the descendants of the Holy Prophet from the state of being scattered and will bring all of them together in Paradise. This is the promise which Allah has made in the Holy Quran. Do not think of those who are slain for the cause of Allah as dead. They are alive with their Lord and receive sustenance from Him.(Quran 3:169)

Our blood is dripping from their hands and our flesh is falling down from their mouths.

You (Yazid) may employ your deceit and cunning efforts, but I swear by Allah that the shame and disgrace which you have earned by the treatment meted out to us cannot be eradicated.

Coming from a woman in shackles, the speech reminded many of the fearlessness of Ali ibne-Abi Talib, and the grace of Fatima binte Muhammad. Out of the 700 attendees at the occasion, many stood up and opposed Yazid’s treatment and were removed from the venue.

It was Zainab who, on multiple occasions become Ali-ibn-al Hussain’s human shield (Hussain’s only surviving son, the fourth Imam of Shias). This not only showed her love for her nephew and deceased brother but also her part in ensuring the twelve Imams held as figures of divine leadership and guidance by Shia Muslims today.

Iran commemorates her role as a nurse in the battle of Karbala by recognizing her birthday as Nurse’s Day. She is seen as a strong female icon, who began a revolution after setting up the very first majlis in Syria after she was set free, and incorporating Matam as a means of catharsis and expressing pain. During these majalis, Zainab recounted documented the deaths and the events of Karbala, her narration having lived on till this day, 1400 years later.