The cultural significance of Shaam-e-Ghariban, Hazrat Qasim's Mehndi and many others 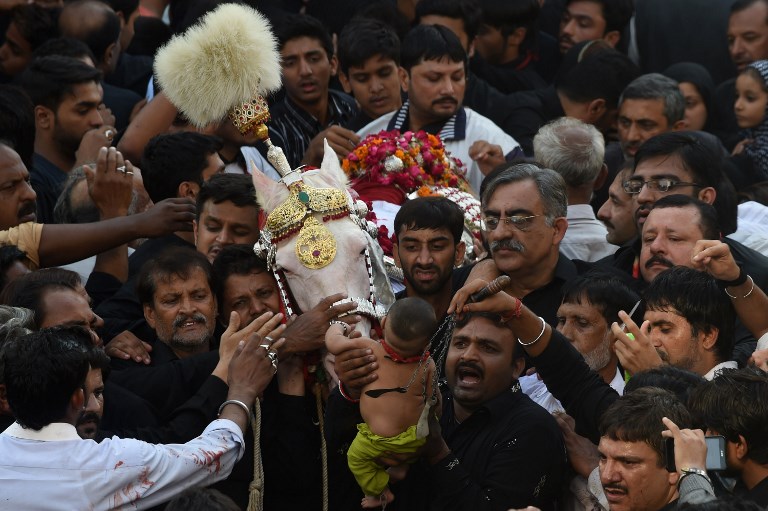 KARACHI: During month of Muharram, Shia Muslims across the globe mourn the death of Prophet Muhammad’s (PBUH) grandson Imam Hussain (AS), who was killed brutally along with 72 of his closest companion, in Karbala, Iraq, in 680 AD. Muharram is considered one of the most holiest months in the Islamic calendar, second only to Ramazan.

Processions are taken out on roads on specific dates, Alam Pak (holy flags) are hoisted at homes, and Aza Khanas are adorned while majalis (religious gatherings) are organised to honour the sacrifice of Imam Hussain. There are a few traditions and symbolism that people aren’t very familiar with. These are:

Jhoola or cradle in Muharram processions and gatherings is taken out in memory of Imam Hussain’s (AS) youngest child Hazrat Ali Asghar (AS) who was just six-month old when he was killed by Yazid’s forces. It is believed that Hazrat Ali Asghar (AS) was in his cradle when Imam Hussain (AS) asked for help in the field of Karbala and Hazrat Asghar moved aggressively in his cradle as if to give a signal to Imam Hussain (AS) that he was there to help him. When Iman Hussain (AS) took him to the forces and asked them to give the child a few drops of water, Hazrat Asghar was shot by an arrow, which resulted in his instant death. To remember Asghar’s sacrifice, Shia Muslims take out a cradle during processions.

Alam, which means flag, is considered a sacred symbol for Shia Muslims because it is associated with Imam Hussain’s (AS) brother Hazrat Abbas (AS) , the flag bearer of Banu Hashim. Alam Pak is taken out during majalis and processions.

This is mostly observed in the sub-continent. A mehendi is orgsanised after majalis on seventh day of Muharram in memory of newly-wed Hazrat Qasim (AS) who died on the battlefield of Karbala. Hazrat Qasim was Imam Hussain’s (AS) nephew and was married in Muharram before the carnage. He was sent to the battle and his body was pulverised after Yazid’s forces ran their horses over him. It is believed that his body came back in pieces, collected in a bundle. Therefore, after majalis on the 7th day of Muharram, Shia Muslims prepare a Mehendi consisting of oil lamps, which children place on top of their heads and join the procession.

Sabeel is a stall set up to supply drinkable water. Imam Hussain (AS) and his family were kept thirsty for three day before he was killed. In his memory, Shias establish these sabeels across the city so that people on their way to processions or majlis do not get thirsty.

Zuljinah was Imam Hussain’s (AS) horse, on which he went to the battlefield and was martyred. Shia Muslims believers raise horses in their community areas as Zuljinah’s replicas and take them out during Muharram rituals, so that people can pay homage in memory of the sacred horse.

Tabbaruk means something sacred and from which you can receive blessings. Food items after majalis is known as  Tabarruk.