Like one of the characters said, there is no room for love in the Minal Khan and Danish Taimoor starrer 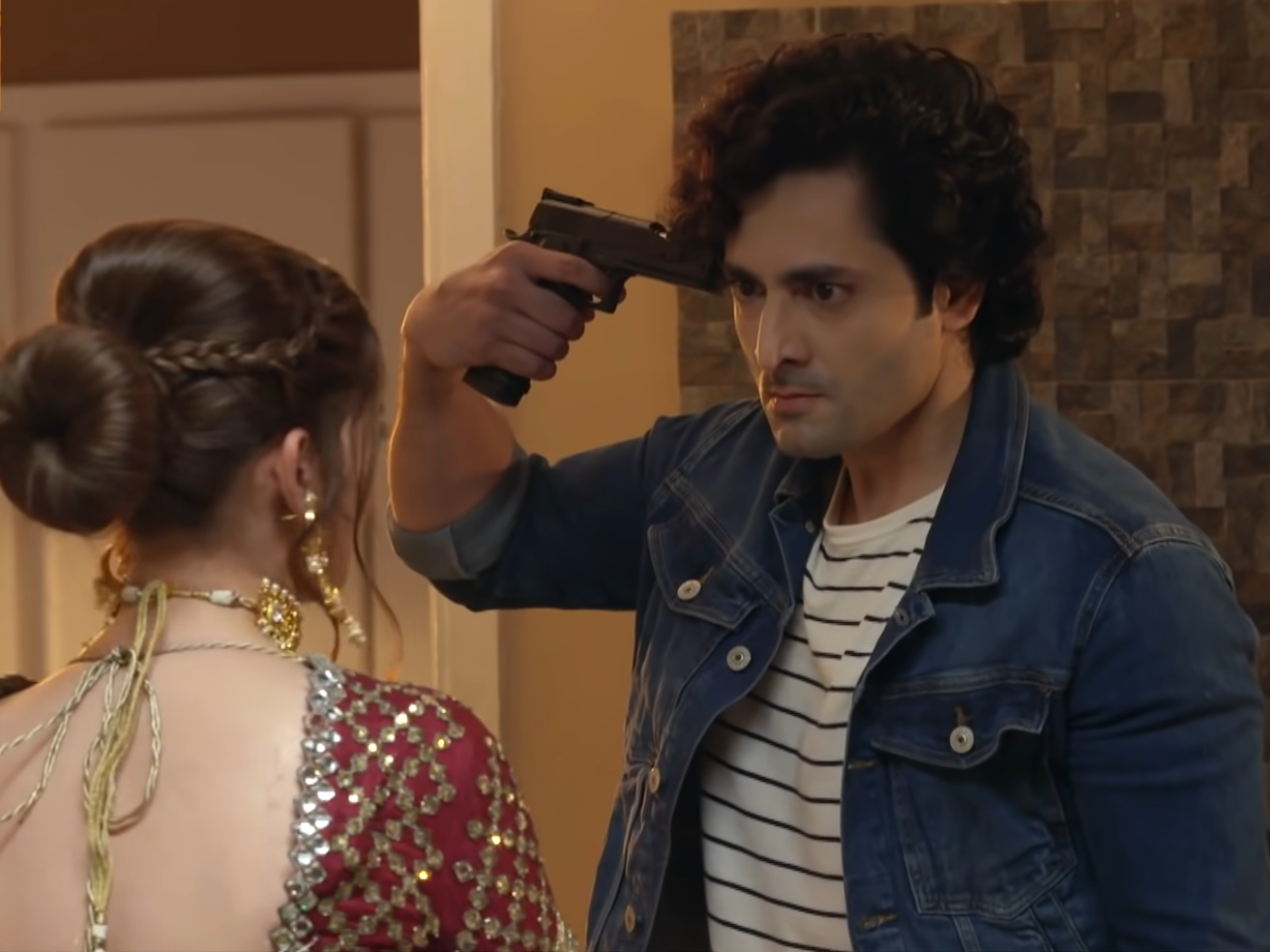 KARACHI: Pakistani television has seen many poorly written scripts, underdeveloped characters and repetitive themes. We have also seen our fair share of emotional and physical abuse on the small screen.  However, speaking of some recent dramas that are progressive and attempting to break stereotypes, we thought local television was moving forward and in the right direction. Until drama serial Ishq Hai went on air and decided to take ten steps backwards. The project has one of Pakistan’s most popular actors, Minal Khan, as the lead along with Danish Taimoor, Saba Faisal, Babar Ali as cast members. Yet, the star studded cast only makes one question our actors’ choice of scripts.

To put things simply, the drama is an accurate representation of what toxic relationships look like. And we are not just talking about romantic relationships. Titled Ishq Hai, the drama ironically has no room for love. Minal Khan as Isra and Danish Taimoor as Shahzaib are in love with each other but have not told their families. Both of them belong to well off families with Shahzaib looking after his family business while Isra is the spoilt daughter of her parents. What could possibly go wrong with two rich and fairly open minded individuals being in love, right? Well, you might as well want to ask what goes right, if anything.

Isra and Shahzaib’s relationship from the very first scene comes off as a cringefest, with the latter being obsessed with Isra sending him her pictures at any point in time. Shahzaib acts like a 16 year old who has just found his first girlfriend and wants to treat her like he owns her. Danish Taimoor’s hairstyle and dialogue delivery do little to help his case.

Things don’t work out any better once their families find out about their relationship and reject it. Typically, Shahzaib’s mother (Saba Faisal) wants him to marry his cousin (who he clearly does not even speak to but is obsessed with him) while Isra’s parents apparently do not believe in the concept of ‘love marriage’. So Isra is the spoilt youngest child of a very rich couple, gets handed over car keys and credit cards as and when she pleases, but when it comes to love, her brother (played by Faraz Farooqui) literally says “hamare ghar main mohabbat ki koi gunjaish nai hai” (there is no room for love in this house).

Shahzaib goes into full blown psycho mood once both the families reject his relationship with Isra and begins acting like a stalker, a man who cannot take no for an answer and simply a toxic ex. In episode 7, he even goes to the extent of kidnapping Isra on the day of her wedding and emotionally blackmails her into marrying him instead.

The point of this story is not even to solely target Shahzaib’s character and prove how toxic he is because that would take a while. But almost every character in drama serial Ishq Hai is messed up and has very weird expectations from love. Most of them are downright entitled. If you think the way Shahzaib dealt with the whole situation was insane, wait till you find out about Haris (played by Hammad Shoaib), the family friend Isra is marrying. Like so many other antagonists, Haris has recently returned to Pakistan from the UK and falls in love with Isra at first sight. Clearly an arranged marriage, Haris somehow wants to compete with Shahzaib over who owns Isra. Much like Shahzaib, Haris too, is obsessed with sending pictures on WhatsApp. In fact, Haris seems more concerned about Shahzaib’s online activity than Isra’s and represents every person who has ever had a crush and waits for the blue ticks to appear on their phones after sending a text. And when he does not receive a reply, of course he calls up Shahzaib to make sure that his messages were acknowledged.

Speaking of selfish male characters, Shahzaib’s younger brother, Raza (played by Sajjad Paul) takes the cake. While he may want to achieve quite the opposite, Raza’s character also provides major comic relief in the drama. Shahzaib and Isra are heartbroken, their families are shocked, life changing decisions are being made but the only thing that Raza cares about is his own marriage. The two brothers were set to marry their two cousins who are sisters but of course, when Shahzaib turns down the proposal, Raza’s chances don’t look bright either. Scene after scene, Raza voices his concern over him not being able to marry the girl he loves regardless of whether Shahzaib is alive or Isra is getting kidnapped or anything else.

Having a female antagonist who is angry with the world for no reason is a classic for Pakistani dramas. In drama serial Ishq Hai, Azekah Danial takes up the role of the evil bhabi, Naina. It has been a few days since Naina got married to Isra’s brother and became her sister-in-law and the marriage was clearly an arranged one. Yet, Naina has some personal grudge against Isra and leaves no opportunity to mock at her sister-in-law and her ill fate. She creeps up on Isra for no reason, checks her phone (apparently everyone in this drama is obsessed with the other person’s social media activity?), and constantly reminds her of what a disappointment she is. Seems like an unreasonable amount of hate coming from a person who is almost a stranger. Did we mention how Naina once mocked at Isra for not committing suicide after all the embarrassment that she has put her father and brother through? What a delightful sister-in-law indeed.

Criticizing Ishq Hai for its toxic characters and ridiculous portrayal of love is easy but finding a positive amongst the chaos is nothing short of an achievement. One aspect in which Isra deserves to be acknowledged and appreciated is when she decided to stand up for herself after realizing that she can’t be with Shahzaib for whatever reason. She might have loved him once but as soon as she realises that she deserves better or that she deserves respect, at the least, Isra takes a step back. While she may be worried about her family’s izzat as well, it is respect for herself that makes her move on from Shahzaib. She fights for her love when she can but once she finds out the things that Shahzaib kept her in the dark about or his entitled attitude, she tells him to back off.

Shahzaib, too, might be outright crazy but one thing he isn’t is a player. Shahzaib does not play around when it comes to love and he definitely does not lead someone else on. He is clearly obsessed with Isra and communicates the same to his cousin when she gets upset after Shahzaib dumps her. In Shahzaib’s defense, he does not even speak to his cousin let alone think of marrying her. It is his mother who wishes to marry him of to his cousin without his consent. But then again, consent does not really seem to have a place in the drama anyway.

Ishq Hai definitely did not start off on the right foot and if it continues to move along the lines of toxic relationships, we are not sure how many people would want to keep watching it. But if the team manages to pleasantly surprise fans in the upcoming episodes, we might have something to look forward to.