“I respect women the most,” says Khalil-Ur-Rehman

On an episode of Ghabrana Mana Hai with Vasay Chaudhry, the screenwriter talked about Mahira Khan and his issues with Aurat March slogans 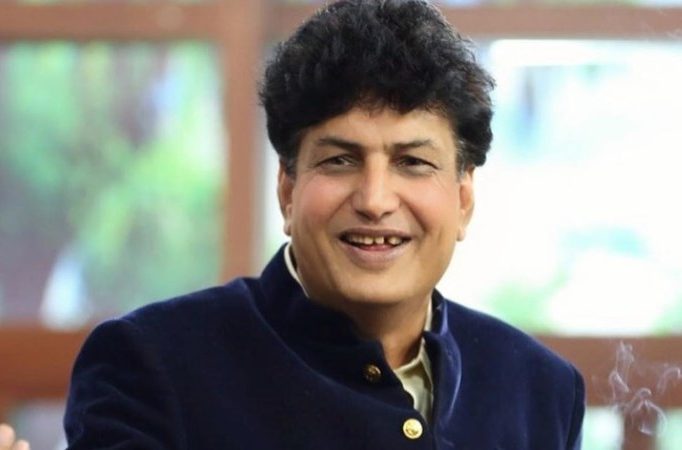 KARACHI: Khalil-ur-Rehman Qamar could easily be the most controversial screenwriter of today’s day and age. From his onscreen appearances making waves throughout social media, to his dialogues not sitting well with those who accuse his writing of misogyny, Qamar is both loved and hated by two communities very polar in nature to one another. Regardless, Khalil-ur-Rehman has often maintained that he is the biggest supporter of women’s rights while questioning modern feminism in sometimes the harshest ways possible.

Recently making an appearance on Ghabrana Mana Hai with Vasay Chaudhry, he talked about his pronunciation and general tone of speaking being mistaken by people as rude. He said that he takes pauses and lays emphasis on words which makes him appear colder than he is. But he only has problems with people that show dishonesty. “People who know me or live close to me know this very well,” he said.

Upon being asked whether women are scared of the persona he has set about himself, Qamar said, “Why should they be scared? There is no one I respect more than women.” He went on to elaborate, “whenever I meet them on the way, or on a flight, or on the road, I always greet them with respect and affection.” Upon this, Chaudhry asked him if he has faced any issue with women thus far. To this, Qamar replied, “Alhamdullilah (Thank God) never! It has only been a problem for those who were to have problems because of their stupidity.”

Chaudhry asked, “Do you feel, specifically this year, that you have become a torchbearer against the feminist movement?” To this Khalil-ur-Rehman honestly stated that he did not know what feminism exactly was. “When the incident occurred, I had only gone to plead in favor of the point my play was attempting to make, not to question or argue on feminism.” However, he added that the slogans and chants from the growing feminist movement in Pakistan did not sit well with him. “I fully support women’s rights, but I did not agree with those chants. So I just wanted to say it. That these chants are disgusting and dirty. They do not match with the social norms of our country. After all, we are the Islamic Republic of Pakistan and not the Feminist Republic of Pakistan. So they should change these slogans and make these slogans mutually acceptable. If it is about rights, then both men and women have their rights snatched away from them. What is being addressed by feminism are just the rights of the elite class, right?” he alleged. “Whether it is a poor woman or a man, their rights are snatched away from them.”

Upon being asked what feminism is, Khalil-Ur-Rehman stated, “When the entire scenario unfolded, I read up and researched. During the first world war, a number of men were killed and women had to take up the responsibility of breadwinning. Due to this, women had to go through humiliation and disrespect at their workplaces such as lower wages, etc. I am for that. Then they asked for equal opportunities. I am for that too. I am for everything that does not defeat our social norms and social setup. I read their manifesto and agree with all their demands. I just do not agree with their “title” i.e., their chants. He also added that the representation of women in the march was “not a representation of my women” and that the way Aurat March had been including Khalil-Ur-Rehman was not tolerable for him.

A post shared by Art by Komal Ash (@komalash)

He further went on to clarify his position regarding Mahira Khan’s tweet in response to Khalil-Ur-Rehman’s comments on Adnan Malik. The two actors had been Qamar’s lead characters for the play Sadqay Tumhare. “My relationship with Mahira Khan is full of respect. I respect her a lot and she used to respect me a lot too. It was a rather nasty remark when she tweeted against me. I was startled. I wish she called me and addressed it with me personally, so I could have explained myself better.” 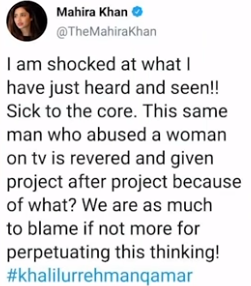 He also added that his film Kaaf Kangna was deliberately destroyed, and he will bring up the issue some other time with Vasay Chaudhry in the future.