It is time we saw women for the multiple roles they play in their daily lives, regardless of becoming mothers biologically. 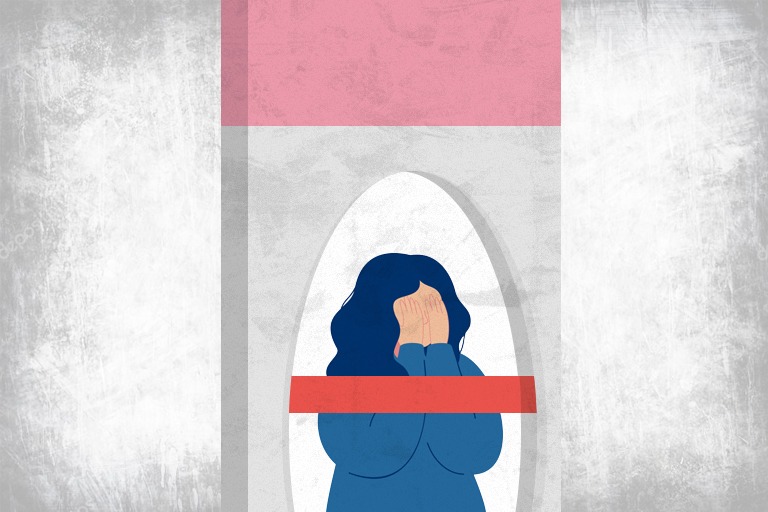 KARACHI: Infertility is seen as something only a woman should be blamed for, irrespective of any other aspects around it. There is a heavy focus on its treatment and not on understanding why the stigma around infertility exists. A woman who is unable to conceive is not seen in any other light or role(s) she plays at home and in society at large. How odd for a woman to not be able to conceive? Isn’t bearing children all there is being a woman? So much respect is associated with a woman over her marriage and childbearing capabilities, that we sometimes forget all the individualism she holds as a human being. A society that consumes lectures on Haya (modesty) for breakfast, and Pardah (privacy) before going to sleep somehow never finds it appalling to ask couples over lunchtime to have unprotected sex until it bears fruit.

The more archaic notions of society focused on survival. More labor was required for jobs that required more shoulders, and more man-power. There were diseases for which vaccines or antibiotics had not been invented, disasters that engulfed towns due to poor infrastructure and preparation, and below-average standards of living for the commons with a huge financial, educational divide between the aristocracy and the ruled. Due to this, childbirth was seen as a ray of hope – another child to make up for the loss of the previous one to a certain disease, more sons for more labor at the farm, a larger family for better division of labor of household chores. Today, such is not the case in urban settings (or so we hope), yet the stigma of infertility seems to transcend generations, found everywhere around us.

However, a recent ad released as a Women’s Day initiative tries to change the narrative around the subject. It sketches an ideal scenario where the family has an open mind and acceptance towards women who are unable to conceive. The emotions towards childbearing stem from the urge to conceive a version of oneself that can be sent into the future. A legacy, a gene – almost something of a message. The ad beautifully sums up how the now is often sabotaged as we look forward to a future our own consciousness will not be a part of. What it brings attention to perhaps is the idea that happiness and acceptance can be found today.

Nonetheless, it is not as simple and it will probably take us a few decades to achieve a healthy family structure, like the one this recent ad portrays. Chalkings of “Baanjh-pan door karayen” (Come to us for the treatment of your infertility) are a frequent sight in Karachi. Interestingly enough, infertility in women welcomes more intrusion from their surroundings than infertility in a man. The former is also more talked about, with a general assumption that it must be the woman who needs treatment for her infertility for the couple to be able to conceive.

Faiza*, who dealt with infertility for the first 14 years of her marriage, recounts how her husband’s second marriage was always an option for the in-laws’. “Expected to seek treatment for my infertility, I would often be told it is up to me to continue my husband’s forefathers’ generation. That in itself was a lot of pressure. I took the most rigorous treatment for my infertility and it gave me acne, made me gain weight, caused me to develop cysts in my uterus. What it didn’t give me though, was the child (read: son) my in-laws were hoping for.”

Faiza went on to adopt her sister-in-law’s daughter, who took the drastic decision owing to the complications Faiza faced, both related to birth and the intrusion surrounding it. “That saved nothing. They taught her (the adopted daughter) to pray for a baby brother. She was quite young. About 2, soon to turn 3. She would cup her small hands and sit on a prayer mat with a bed sheet covering her head praying Allah miyan mujhey chota bhai dedein (Allah please give me a younger brother). It was adorable and pressurizing at the same time. My source of a break and relief from all the pressures and intrusion felt turned against me.”

Hlo myself bandook kaur dhillon, seeking life partner for eldest son. girl must be having golden ratio physical features. willingness to be baby making machine is must. proficiency in daal roti sabji is preferred but can be learned on job later. pls have 2+ years experience in –

The participants of the research were asked about whom they thought was the cause of infertility most of the time and 40% of them correctly identified that both males and females are equally responsible. Seventy percent of the participants were aware that there is a fertile period during a female’s menstrual cycle. However, when they were asked to identify that period from the choices given (right after menses, mid-cycle, or just before the beginning of menses), only 46% of them correctly identified mid-cycle.

Upon being investigated for what they thought caused infertility, 30%  of the people also held ‘supernatural causes responsible’ while 38% believed black magic has a role to play in childbirth (or the lack thereof) as well.

Perhaps the reason behind the unwarranted fear of black magic and jinns causing a halt to childbirth stems from the obsession we have with childbirth. Societies in their earlier phases depended on larger family size for more sustenance, mostly economically. This could have led to assumptions around black magic by an enemy to cause financial problems. However, today, larger family sizes mean more expenditure, especially in urban settings where housing, water, education (although not all cases in developing countries), food, and transport all make it difficult to sustain more people effectively.

Perhaps, we never outgrew the age of viewing women as simply a source of baby-making. The culture places immense value on mothers, immense pride. Social mobility for women has hardly ever been about climbing the social ladder through financial or educational merits, and we still show more joy to a woman’s marriage than her graduation. ‘It is their nature,’ we tell them. Dissociating any and every woman having difficulty in conceiving to somehow view themselves as unnatural.

According to another research by Modern Fertility conducted in 2019, 59% of women agreed with the idea that “women who are infertile are unfairly treated. On the other hand, only 21% thought “men who are infertile are unfairly treated. 41% of the respondents agreed that people think less of a woman who is infertile, in comparison to the 24% who thought people think less of men who are infertile. About 45% of women who struggle with infertility revealed that the stereotypes surrounding the subject have affected them personally, while 28% of infertile women believe their infertility has caused people to treat them differently. 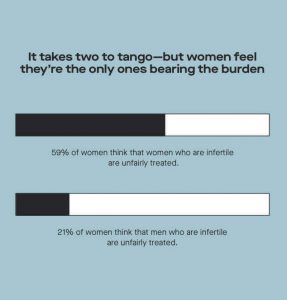 In places like Karachi, however, it takes a dangerous turn as women are encouraged to give the ‘wall chalkings’ a shot and try the ‘specialists’ who can rid them of their infertility through treatments unheard of. This can not only harm their physical health, but also their mental health. And a country that runs on ‘totkay’ (home remedies) and self-medication, it is crucial to talk about the immense pressure of childbirth we place on women the minute they sign their marriage contracts.

*Name has been changed to maintain confidentiality.