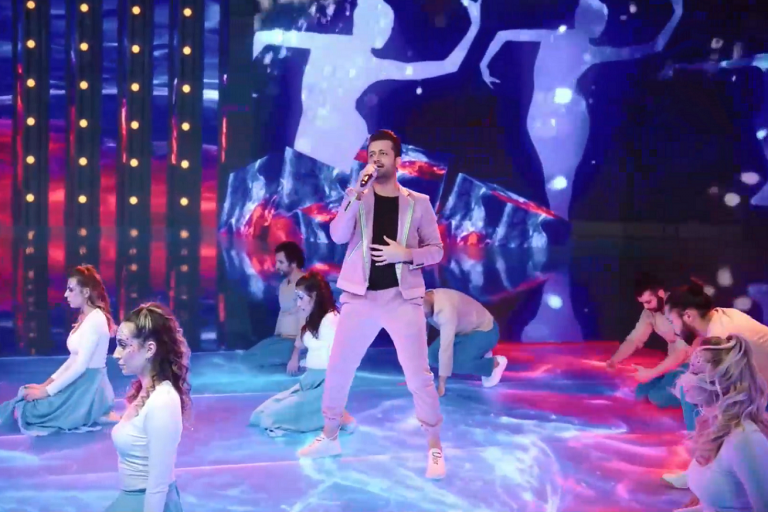 KARACHI: The much awaited PSL 6 opening ceremony took place virtually on 20th February, right before the match between Karachi Kings and Quetta Gladiators kicked off. The ceremony featured performances by Atif Aslam, Naseebo Lal, Aima Baig, Young Stunners, Humaima Malik and Imran Khan. In order to make it an SOP-compliant show, the performances were pre-recorded in Turkey.

While the evening started with the national anthem of Pakistan, Atif Aslam was the first one to take over the stage. Performing a mashup of some of his best hits including ‘Woh Lamhey’, Aslam proved to be the powerhouse that he always is. He looked comfortable in front of the camera and knew how to work the stage. However, the ballet dancers performing behind him did not quite sit well with the theme of the ceremony and Aslam’s songs. The choreography looked confusing and haphazard.

It was a pleasant surprise for Pakistanis who have spent years singing along to ‘Amplifier to see Imran Khan bring the track back to life during the PSL 6 opening ceremony. However, it was obvious that Humaima Malik had only been invited to add star power to the show. While the rest of the performers followed a choreographed routine, Malik had not been assigned any choreography and looked rather out of place being paired up with Imran Khan.

However, the biggest disappointment came in the form of the absence of the Young Stunners on stage as the official anthem, ‘Groove Mera’, was performed. The female leads, Naseebo Lal and Aima Baig were present on stage and performed the song with extreme enthusiasm. However, the Young Stunners were only witnessed in a recorded clip running at the back. Why had they not been invited to join the rest of the performers in Turkey? Or had they not been able to make it due to other commitments? That is a question that only the due and the management can answer.

Aima Baig looked confident as ever on stage and performed her bit quite well. Naseebo Lal, on the other hand, looked rather overwhelmed being on stage performing the official anthem of a cricket tournament. But she did what she does best, let her vocals deliver her confidence and enthusiasm to the viewers.

The virtual ceremony wrapped up in less than half an hour, making it a lot shorter than previous ceremonies. However, the recorded version meant that all technical and human errors which are made during live shows were avoided and the show ran smoothly. The evening closed with fireworks from the National Stadium in Karachi and a win for Karachi Kings during the toss.