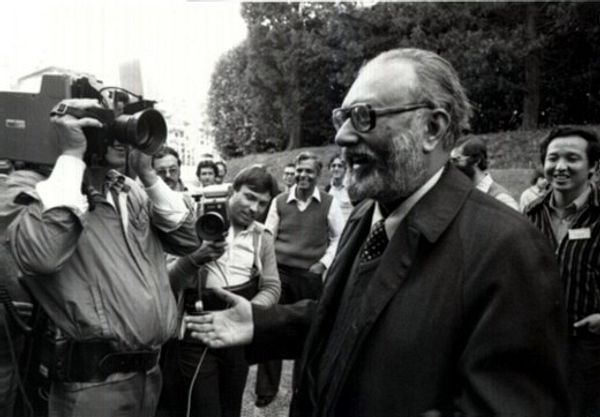 The professor established the house as his base in London from the years 1957-1996. During these years he set up the Theoretical Physics Department at Imperial College of London, alongside the late Professor Paul T Matthews.

“A blue plaque on the house in Putney where he lived for 40 years is a fitting tribute to Nobel Laureate Abdus Salam, who was not only one of the finest scientists of the twentieth century, having unified two of the four fundamental forces of nature, but who also dedicated his life to the betterment of science and education in the developing world,” said Professor Michael Duff, from the Department of Physics at Imperial, who completed his Ph.D. in 1972 under the supervision of Professor Salam, and formerly held the title of Abdus Salam Professor of Theoretical Physics.

Salam was awarded the Nobel Prize for Physics for his contribution to the electroweak unification theory in 1979, alongside Sheldon Glashow and Steven Weinberg.

Abdus Salam may have an honorary blue plaque installed outside his home in Britain, an achievement that has only been enjoyed by some of the biggest masterminds of scientific history such as Alan Turing, Charles Darwin, and Rosalind Franklin, but Pakistan has still had a difficult time accepting the scientist because of his religion.

An earlier editorial in the Dawn newspaper stated, “That it has taken nearly four decades for this country to honor a globally renowned scientist who was one of its own, is a sad reflection of the priorities that hold sway here… For Dr. Salam was an Ahmadi, a persecuted minority in Pakistan, and his faith rather than his towering achievements was the yardstick by which he was judged.”

Pervez Hoodbhoy, a well-known physicist and analyst was among the organizers of a ceremony inaugurated to honor Abdus Salam after he won the Nobel Prize. Abdus Salam was unable to enter the premises with a large number of protestors from Jamaat-e-Islami blocking his way to the entrance. “The situation grew extremely tense; I clearly remember, they were threatening that they would break Dr. Salam’s legs if he dared enter the university campus; we had to call off the program.” Pervez Hoodbhoy recalled, speaking to BBC.

Today the esteemed scientist has a documentary film based on his life, and in 2016 Nawaz Sharif, then Prime Minister renamed QAU (Quaid-e-Azam University) as the Dr. Abdus Salam Centre for Physics. The plaque outside the house of Abdus Salam should not be a surprise, but must also be a reason to recall his contributions to the scientific society of Pakistan and the world.