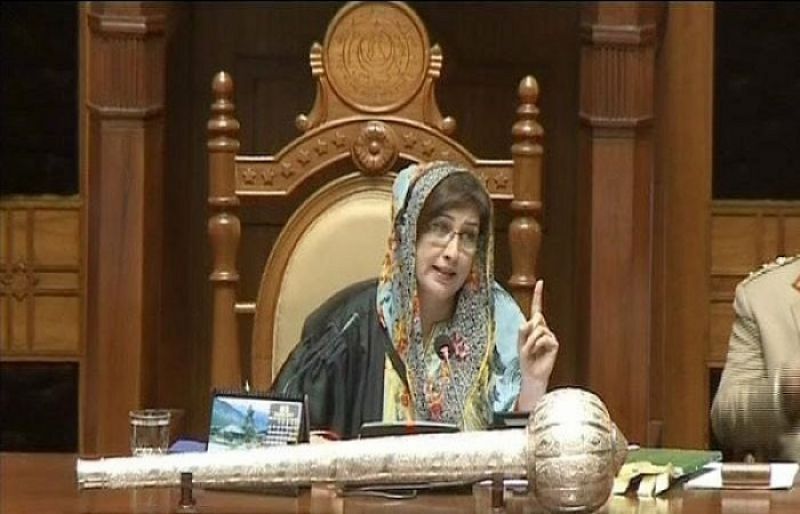 KARACHI: Pakistan People Party (PPP) leader and former deputy speaker of Sindh Assembly Shehla Raza caused controversy on Twitter after posting a hateful statement against the Ahmadiyya community. In the now-deleted tweet, Raza criticised the government’s decision to include economist Atif Mian, a member of the persecuted community in the economic advisory council (EAC).

“It is incomprehensible how Imran Khan, whose ideal is the state of Madina, chose the grandson of Ghulam Ahmad Mirza (founder of Ahmadiyya sect) as an economic advisor,” the tweeted stated. 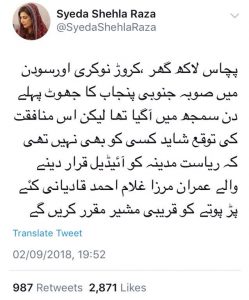 However, following criticism, the tweet was deleted and Raza outright denied drafting it, blaming, instead, her social media team for posting the hateful comment without her approval. The PPP leader went on to reveal that she had fired all those responsible. She did, however, fall short of apologising to the Ahmadi community.

During Election social media team was formed a member in light of words tweeted a statement ,which is ambiguous creating negativity. I condemned & fired all .next I will run myself .I saw it now, busy in cabinet meeting.Accept my apologies

In the meantime, Mian was asked to resign from his position on the council following pressure from extremists on his appointment. Two other economists have also stepped down from the council in solidarity with Mian, who insisted on serving the country in any way possible.

Surprisingly, many human rights organisations have united in support of Raza, by condemning the criticism following her tweets. On Wednesday, rights groups including Aurat Foundation, Pakistan Institute of Labour Education and Research (Piler) and Human Rights Commission of Pakistan (HRCP) held a press conference in favour of the PPP leader and tried absolving her of the statements posted from her Twitter account.

The speakers at the press conference said someone had misused her account and posted religious and hateful material in her name. “After that clarification by her, there is no reason to unleash a campaign against her. Civil society is well aware of Ms. Raza and her contributions. She is a progressive (person) and (is) against religious extremism,” said a speaker, as quoted by Dawn.

Interestingly, Raza has tweeted similar comments about Ahmadis in the past. In 2013, she criticised liberals for having a soft corner for Ahmadis and praised PPP founder Zulfikar Ali Bhutto for declaring them infidels.

I M MUSLIM BY FAITH and KHATUM NABOOT is the basic FUNDAMENTAL of ISALM ONE WHO CLAIMS HIM-SELF AS NABI/RASOOL IS KAZIB,surely out of ISLAM

Raza claimed there were various fake accounts made in her name but all her anti-Ahmadi statements have always been posted by her official account.

When PPP leader Shehla Raza's twitter account wasn't 'hacked', while she was fanning bigotry against the #Ahmadiyya community: pic.twitter.com/CSONLTJ1Lv