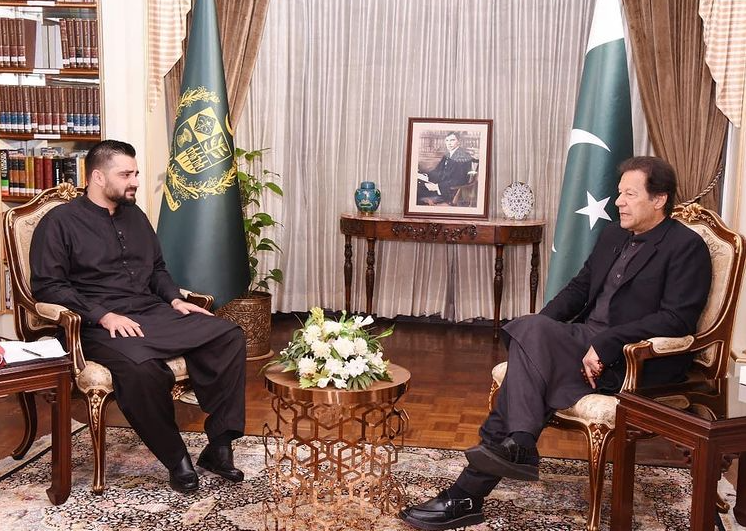 KARACHI: Pakistan has for long taken pride in its family system. Being mostly an agricultural society that has required big family sizes for economic growth, the family system has been an utmost priority. The idea that family is what keeps the fabric of our culture intact has been propagated through media, literature, and more recent years, time and again, with the help of our Prime Minister, Imran Khan. And this school of thought was further explored in Imran Khan’s latest interview with Hamza Ali Abbasi.

In the interview, Imran Khan talked about his journey towards God, family, and why the cultural fabric is in an unsafe position.

Speaking about his time in England, Khan spoke about how like many others, his education led him to believe that religion was outdated. “I don’t know about right now, but during my time, God and hereafter were outdated concepts. The fear of accountability is an advantage we have, that I realized later.”

“As this movement became a part of their culture, their celebrities and artists were pushing it forward. Our religion tells us to hide one another’s flaws for a reason. When flaws are advertised, they are justified and then they become a part of society,” he said.

He said while our society had many flaws at that time, “Fahashi (vulgarity) and immorality were not advertised.” Hamza Ali Abbasi chimed in with his views claiming that the family system of Pakistan, which Imran Khan took pride in, was also facing a collapse. “Every other day we hear about another marriage ending. Why do you think that is?” he asked the PM.

The PM continued on the counterculture being the root of all evil and added that it seeped its way into Hollywood, and then into Bollywood. He complained about the culture now being adapted in Pakistani content and products. As a result, it has made its way to our society too. PM Imran Khan highlighted how the rising number of divorces, and decline in family systems owes itself to this very reason.

Giving an example of welfare states, PM said it’s something people can fall back on. While Pakistan has not yet become a welfare state, he thought people have the family system here to fall back on in times of need. So it is integral to ensure this system stays intact. Imran Khan said, “I saw how bad the consequences of the culture of sex, drugs, and rock and roll were and how they affected the lives of pop stars in those countries. I saw so many celebrities going to rehabilitation centers with their marriages seeing divorce. Their children would attempt suicide or they themselves would. I saw how their lives fell apart.”

What exactly was American counterculture?

The American counterculture was many things, contrary to the reduced outlook most of us sport towards it in our part of the world. Rising to national attention, and later on international, the counterculture of the 60s was a movement categorized by anti-establishment attitudes that developed in the West from 1960-70. The movement reached new heights as the Civil Rights Movement gained momentum in the USA with a growing mistrust of people towards the government owing to the Vietnam war, especially after President Kennedy’s assassination.

The movement aimed to be anti-authoritarian, giving up the earlier laid-out rules of fashion, as they gave up suits and picked up jeans and pants in fashion, paving the way into the future of fashion as it stands today. The movement took its fuel from the civil rights movement and was aggravated by the Vietnam war, hence most ideologies that thrust the movement forward were ideas of peace, different outlooks to the concept of the ‘American dream’, new interpretations of sexuality, women’s rights, newer concepts of autonomy and liberty recognition of the LGBTQ and Black lives and a growing discard towards racial discrimination and more acceptance.

New cinema and radio came forth too. With this, a more free expression of art was brought forward and topics and scenes that were earlier censored were now argued to be depicted as the cinema plunged further into realism.

There have overall been mixed reviews of the interview. While people have discarded the interview altogether for its lack of seriousness, and only being a discourse between a public figure and a fan, several others have questioned why the PM seems fixated on the matters of divorce rates and fahashi. According to a study by Human Rights Watch, there is a rape once every two hours and a gang rape every eight. For many people, ever since the motorway rape incident, the issue has become priority. The same issue has however neither been shed much light on by the PM himself nor was he questioned about it in his interview with Hamza Ali Abbasi.

A user pointed out how the west not having been “blessed” with our family system is a blatant lie, and something we keep telling ourselves to deny the toxicity it brings.

One of the biggest lies Pakistani children are taught is that the West envies our “family values.”

The truth is we don…

Others pointed out the irony in the situation, with Imran Khan having gone through a divorce himself, that too twice, yet still views it as a taboo.

Another user wrote on how anything foreign is continued to be viewed as a threat. And while being a better society has a different definition for the rest of the world, our leaders still divert the conversation to familial life, something that is not their job to work on.

Journalist Syed Muzammil highlighted how we use family values as an excuse. It was something PM Imran Khan was so keen on blowing trumpets for because it allows us to refuse empowerment to our women. The beauty of our family systems thoroughly cultivated in our people entirely depends on women’s silence.

A common view upheld by people who watched the interview is that it was slightly refreshing for taking its audiences away from politics, exploring Khan as a man who had his own distinct journey, like any other. However, there could have been a number of topics initiated from Abbasi’s side for the discourse, and many problems addressed by the PM himself in light of the fact that we are in the 21st century.