Sobia Khan is responsible for controlling traffic and guiding drivers 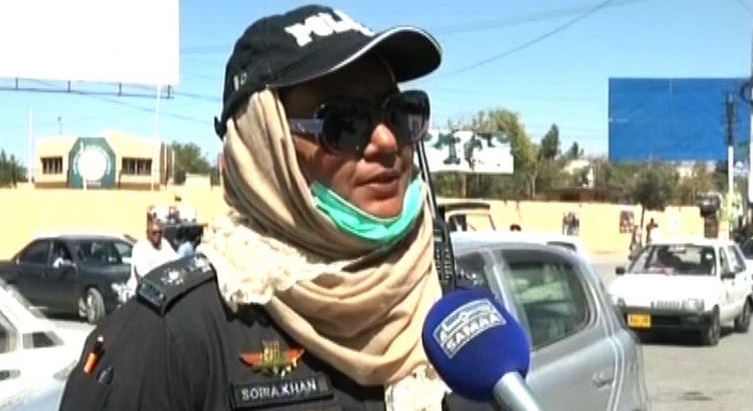 KARACHI: Pakistani women are proving their mettle time and again. They have entered almost every field of work. Sectors that used to be predominantly male-oriented also have females in key positions. More and more women are breaking stereotypes and pushing the envelope to pursue their dreams. A recent example in this regard is Sobia Khan. She is the first female traffic police sergeant appointed in Quetta, Balochistan.

“Women can perform better in the police,” she said in an interview with Daily Balochistan while waving her hand to ensure traffic flow. “The number of female drivers in Quetta has increased. It is very difficult for male traffic sergeants to deal with female drivers. My goal is to enforce the law.”

Famous as Madam City of Quetta, Sobia Khan is the first female traffic police sergeant stationed at the city’s main Serena Chowk. The main reason for her appointment as the first female traffic police sergeant is the growing number of female drivers in the city. She made it to the position despite social and tribal difficulties. During this interview, a traffic officer name Amjad informed that Sobia Khan is very professional and arrives on time in the morning.

According to reports, Sobia Khan fined three women on her first day at work for violating traffic rules. Prior to her appointment, women drivers used to complain that male traffic police are rude to them. “I am here to deal with them now,” asserted Sobia Khan. “Now they (women) have no excuse.”

Earlier on, in 2009, Sobia Khan qualified for the position of Assistant Sub-Inspector of Police examination from the Balochistan Public Service Commission (BPSC). BPSC conducted competitive examination for recruitment of officers in the Police Department. She received her primary education in Quetta and holds a master’s degree in political science from the University of Balochistan. More power to her!