These celebrities are freezing their social media accounts to protest against the spread of "hate, propaganda and misinformation" 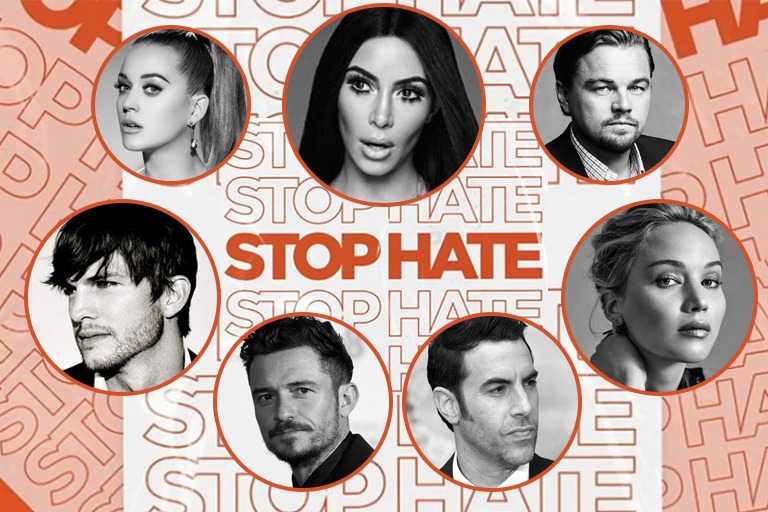 KARACHI: This unanimous move, coming from celebrities, is part of the #StopHateforProfit campaign which was organized by civil rights activists. During this movement, participant celebrities announced that they would freeze their accounts for 24 hours on Wednesday.

“I can’t sit by and stay silent while these platforms continue to allow the spreading of hate, propaganda, and misinformation – created by groups to sow division and split America apart,” Kim Kardashian said in her statement, which came out on Tuesday. “Misinformation shared on social media has a serious impact on our elections and undermines our democracy,” she added.

Katy Perry and Orlando Bloom have also joined the movement and decided to boycott Facebook and Instagram.

“In a time of deceit telling the truth is a revolutionary act.” – George Orwell I love sharing my music and my life with you on Instagram and Facebook, but TBH I can’t sit idly by while these platforms turn a blind eye to groups and posts spreading hateful disinformation and intentional confusion. I’m standing with @naacp, @colorofchange, and @adl_national and will be freezing my Instagram and Facebook accounts on Wednesday, September 16th to tell Facebook to #StopHateForProfit. Will you join me?! Link in bio for more info on how to preserve the truth ♥️

“I can’t sit idly by while these platforms turn a blind eye to groups and posts spreading hateful disinformation,” Perry stated on Instagram.

Various other celebrities to have joined the movement are Leonardo DiCaprio, Sacha Baron Cohen, Jennifer Lawrence, as well as Ashton Kutcher who said “these tools were not built to spread hate [and] violence”.

An important reminder from @SachaBaronCohen of why I will be pausing my Facebook and Instagram for 24 hours starting tomorrow alongside @ColorofChange, @ADL_National, the @NAACP, @GLAAD and many others.

The #StopHateForProfit campaign was launched in June. The organizers of the campaign have accused Facebook and Instagram of not doing enough to stop hate speech and misinformation.

The group is focused on Facebook, also the owner of Instagram and WhatsApp, and last year attracted an advertising revenue of about $70bn (£56.7bn).

The movement has been signed up for by thousands of businesses and major civil rights groups. These groups include the National Association for the Advancement of Colored People (NAACP) and the Anti-Defamation League (AD).

#Facebook claims they address #hate, yet they continue to look the other way as racist, violent groups and posts sow division and split America apart – only taking steps after people are killed. And while they share empty talk about voting, they continue allowing blatant lies and misinformation on election to spread – undermining our democracy. That’s why this Wednesday, we’re freezing” our Instagram to tell Facebook to #StopHateForProfit. Join us: Stophateforprofit.org

“We are quickly approaching one of the most consequential elections in American history,” one of the groups has said in a statement. “Facebook’s unchecked and vague ‘changes’ are falling dangerously short of what is necessary to protect our democracy.”

Along with accusations of data breaches, Facebook now has a new challenge to tackle – the hate speech it allows. In June, Facebook said it will label potentially harmful or misleading posts even if they are left up for their news value. “A handful of times a year, we leave up content that would otherwise violate our policies if the public interest value outweighs the risk of harm.” said Founder Mark Zuckerberg.

However, Zuckerberg also said the social media company would ban advertising containing claims such as ” people of a specific race, ethnicity, national origin, religious affiliation, caste, sexual orientation, gender identity or immigration status” are a threat to others.