Despite many oppressive cultural practices that exist in South Asia, the show is fixated on a predominantly Eurocentric representation of liberation 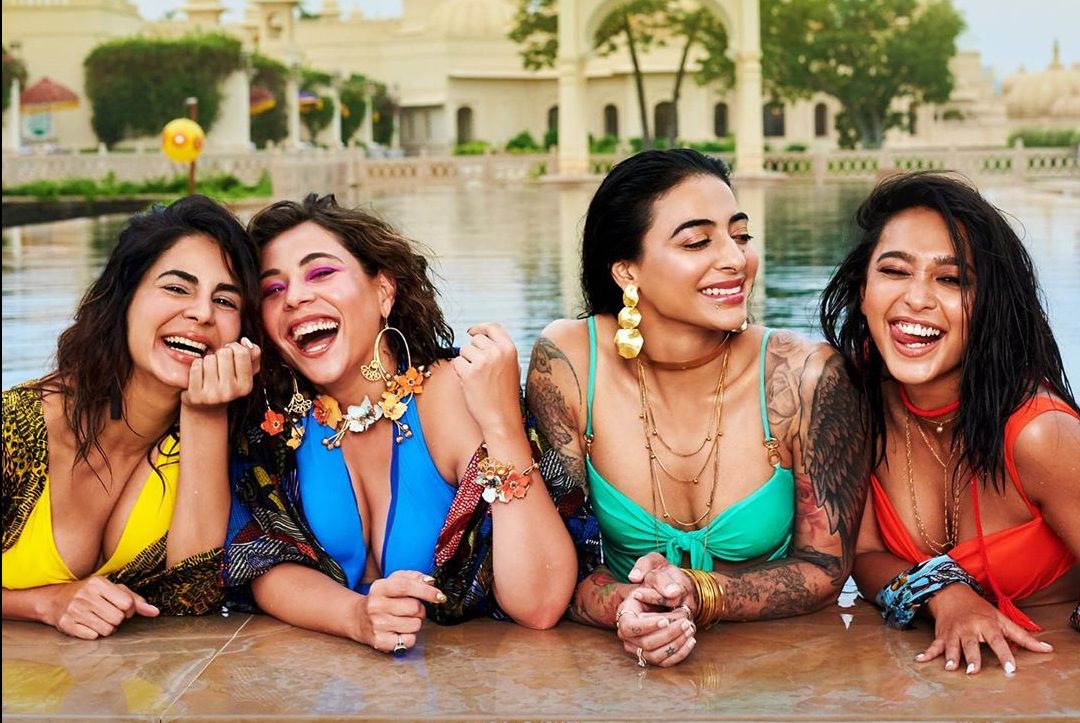 KARACHI: “Just look at the number of men around us. In India, all we see are men everywhere…on the streets, in public transport, in court rooms.” says Damini to her lawyer and friend Anjana as they walk through the bustling streets of Bombay, after losing a court case in the pilot episode of Four More Shots Please. This comment, followed by a joke about “2.000 years of patriarchy” sets the tone for this 2019 Amazon Prime original show. In fact, it is this very male dominated universe, which the four protagonists (namely Siddhi, Umang, Anjana and Damini) navigate through. The show chronicles the trials and tribulations of their personal and professional lives in the elite metropolis.

It is directed by Anu Menon and Nupur Asthana, and written by Devika Bhagat and Ishita Moitra. The cast and crew on and off screen, is at once, a female dominated universe. Projected from the female vantage point, the narrative thrusts the four women and their effortless camaraderie at the front and center of the show. This earns the show’s reputation as the South Bombay equivalent of Sex and the City. For the next two seasons, the show grappled with questions of workplace misogyny, the double work burden of a single mother and sexual autonomy.

Yet, the superficial treatment of these rather serious issues makes its depiction of female empowerment one-dimensional. The show fails to present more prevalent issues faced by the masses, such as harassment in the public sphere, which Damini, correctly identifies as being ‘filled with men’. Despite many oppressive cultural practices that exist in the reality of South Asia, it insists on being fixated on a predominantly Eurocentric representation of liberation.

Four more Shots Please’s rendition of feminism seems to be a world painted with the colors of a Cosmopolitan magazine. Presented first in the urban, concrete jungle of Bombay, the visuals open up towards the second half of the series, against picturesque backdrops of Goa, Istanbul and eventually, Udaipur. The show metamorphoses into a travelogue featuring impeccable sartorial choices. This becomes, what film critic Anupama Chopra describes as “feminism light”.

tell us what we missed? 🤔 #FourMoreShotsPlease

But what is feminism light? Is it feminism that sells? Is it ‘femvertising’ as a PR stunt?


It is the sanitized quality of the screenplay that makes it difficult to truly connect with the characters. The emotional turbulence simply does not play out effectively through the posh apartments, excessive party sequences and pretty outfits.

So, does the series alienate the average South Asian woman?

No. Not necessarily. In their defense, the world that they choose to create and present on-screen, is actually a subjective reality for a select privileged class. Which means each of the struggles described is very much real. But are they granted their due importance?

Far from a realistic narrative unfolding organically, the show becomes a checklist of gender issues instead:

Yes, all of these ideas are mentioned. Often, multiple concepts are brought to the fore each episode and dismissed without full resolve. Buzzwords and hashtags are invoked and thrown around for the sake of sounding “woke”. Statistics emerge mid conversation extremely unnaturally. Most concerns are dealt with a surprising lack of depth. And the script fails to attain the emotional gravitas of its contemporary counterparts such as Made in Heaven. Issues such as mental health and the trauma of body shaming are raised and often mishandled with utter insensitivity.

For instance, the second season begins with one of the protagonists (Siddhi) in a fragile state of mind, undergoing suicidal thoughts. About 15 minutes into the episode, her vulnerability is brushed off as a joke. Adopting a preachy tone when needed, but otherwise maintaining a “funny” veneer makes the show somewhat unfunny. It is then that the half-baked plot line seems too contrived, too intentional and almost too convenient.

One of the great wins of the show, however, is its body positive portrayal of women. Considering how women’s bodies are appropriated by the male gaze in the Indian entertainment industry, and are subject to unrealistic standards of:

Being skinny but not too skinny

Being size 0 but still ripped

Being ripped but not muscular

It has almost felt as though the ideal body resides in another alien world. In this context, the social messaging of the show to feel good in one’s skin is undeniably refreshing.

Nuance is the need of the hour. And it is nuance that the characters are given. Well, at least the women. The men here appear to be restrained in the same straight jacket of appearances that women are cast in other narratives. They are not of different shapes and sizes, at least not in the first season. Here, it is the men who must conform to conventional standards of beauty. They function merely as eye candy. In fact, beyond looks: even their personalities and characters are flattened to fit a one-dimensional, stock like quality. We have an ex, acting like a man-child. We have the misogynistic boss. We have the ever so dreamy, “tall, dark and handsome” doctor. Common tropes of chick flicks are thus used and abused, as the show revels in stereotypes. Men are rarely granted depth and intensity of emotion, much less the space to evolve.

Ultimately, preachy messaging, ignorant jokes and cringe worthy script writing form a problematic portrait of empowerment. The show must still be lauded for its remarkable sense of aesthetic and its depiction of female solidarity, which is contrary to the stereotypical image of women as adversaries to one another. The audience seems invested in these sometimes silent, sometimes sassy, but mostly flawed and fabulous women. Whatever the case may be, one thing is undeniable: the show has become a guilty pleasure for its audience, especially during the lockdown, as it eagerly waits for the third season.