Have you tried getting an apartment by yourself or been shamed for getting divorced? Welcome to a desi woman's life! 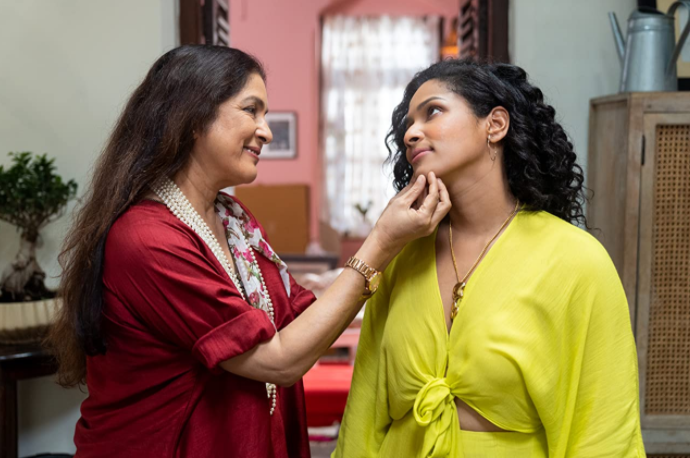 KARACHI: I didn’t think I’d be seeing the struggles of my life flashing before my eyes when I started watching Masaba Masaba on Netflix. The show is based on a famous Indian designer, Masaba Gupta, and her mother, Neena Gupta, both of whom star as their real selves. In the show, Masaba has her own label, called the House of Masaba, is well-dressed and obviously making lots of money – none of that sounds like me.

But she’s a desi, millenial woman going through a divorce and moving back to her mum’s home after it. And there are a lot of things that come across as a little disingenuous in the show, such as how smooth her divorce actually is (in compared to what divorce is truly like in real life) or how she magically finds solutions to every single problem in her life, but certain aspects of the show mirror real life for many single, millenial, desi women.

For starters, the show wonderfully captures the relationship between a mother and daughter and shows the nuances of a modern mother-daughter relationship in this part of the world. Neena is a caring mother but her love is overbearing for Masaba, who wants more freedom and independence after she comes back from her divorce. Masaba has respect for her single mother’s bravery, but doesn’t always show it or voice it.

And there are comments made on a lot of things – dating, female friendships, running a business, doing unpleasant jobs in order to pay bills, the importance of a good therapist and how these are a single woman’s guide as you reach your thirties. Of course, there is far less acceptance for divorced women in Pakistan, but to be honest, it isn’t as bad as what our elder generation of women had to go through.

One of the most important struggles depicted in the show is how difficult it is for single women to find their own homes in the subcontinent. This is due to the taboos that surround divorce and how they only affect women because India (and Pakistan) is a largely patriarchal society. Clearly things aren’t much different in India because in Pakistan, single women have to constantly watch over their backs while living alone, provided someone agrees to let them rent their home or apartment in the first place.

Recently, Haiya Bokhari, fashion journalist and stylist, took to Twitter to reveal that she was harassed by policeman at her apartment in Lahore.

7 policeman outside my door askimg me why I live in my apartment. Have never been more angry or terrified in my life.

Basically, they wanted to know why she lived alone. Haiya documented the entire ordeal in a Twitter thread, which drew a lot of attention online and gave us a picture of what women have to face while living by themselves.

Cop 1 takes my ID, looks at permanent residence address which is different from my rented apartments and ask me why I live alone when I have a family residence. I tell him its none of his business and he needs to explain why he's here, he starts writing my details down.

The idea of women living by themselves is still not a widely accepted one in Pakistan, with feminists fighting patriarchal notions every day that hinder women from living their lives on their own terms. The show touches upon it briefly, how a woman has to have a man (her husband or her father) by her side when finding a home to live in, as no homeowner will rent our their property to a single woman.

I'm 42 year-old professional woman who has been financially independent for at least 2 decades, but people still assume I should be living with my parents. Since things are online, I get constant questions about why I'm not with them.
NORMALISE WOMEN LIVING INDEPENDENTLY!

The production quality of Masaba Masaba could definitely be better but the show is a fun watch because of Neena and Masaba’s chemistry and believability, and also because we all hope that life will turn out okay even when we’re drowning in our sorrows and if you keep fighting for yourself long enough, things eventually do turn around. And the first season of Masaba Masaba shows exactly that.

A list of the most toxic traits of Kabir Singh