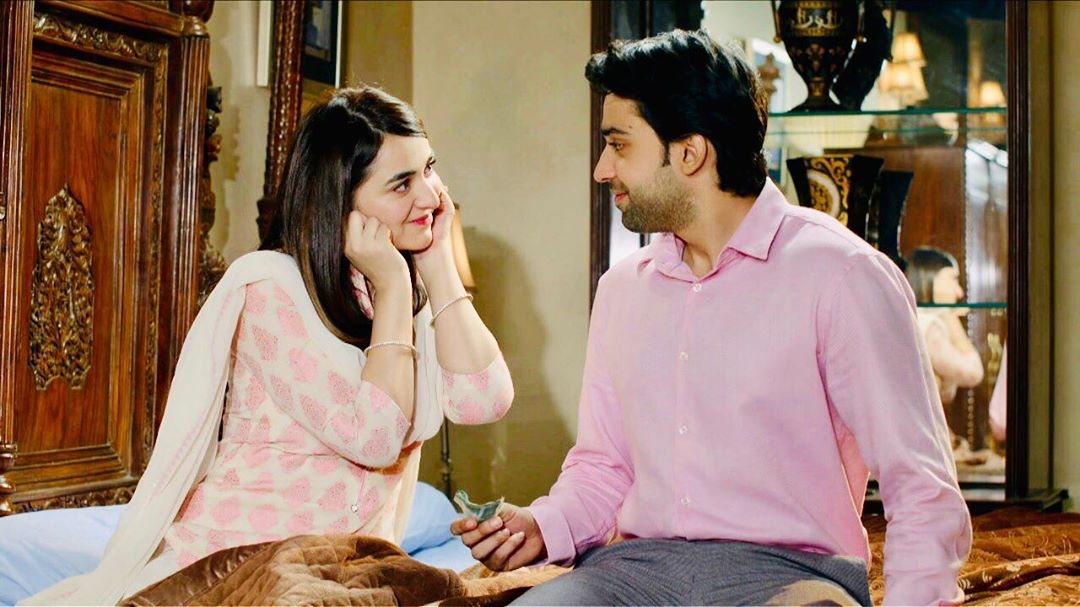 KARACHI: Yumna Zaidi and Bilal Abbas Khan-starrer drama serial Pyar Ke Sadqay came to an end Thursday night. The 28-episode long play managed to sustain the audience’s attention throughout its span after the first few episodes. The major highlight remained Bilal and Yumna’s unique and powerful performances, an all-encompassing script and Farooq Rind’s brilliant direction. Atiqa Odho and Omair Rana’s impeccable delivery came as a cherry on top. Pyar Ke Sadqay was not your average play; it was a love story at heart with women playing stronger roles than what we usually see.

Read: Watch: Pemra Thinks Our Dramas Are Feminist. We Don’t

Incorporating themes of women empowerment, self-love, harassment, love and betrayal, Pyar Ke Sadqay has been garnering positive response from critics and viewers ever since the last episode aired.  It tackled important subjects in a lighter mood, with Mahjabeen (Yumna) and Abdullah’s (Bilal) sweet and simple romance. Comic moments were very refreshing and made the narrative more impactful.

Pyaar kay sadqay has ended and hopefully on a good note. I hope you guys enjoyed it… I’d like to first thank you guys, my fans for giving us immense love and appreciation, for loving Abdullah and Mahjabeen.. pyaar kay sadqay wouldn’t have been possible without your love.. it is because of your love that I’m able to push myself to do better. From the bottom of my heart I thank you! Thank you Dada for trusting me and bringing out the bawlaa Abdullah in me.. thank you for making this masterpiece! Thank you Yumna , yashma , Omair Rana atiqa odo srhaa for such power packed performances, for giving so much to this project. You guys are extremely talented and I honestly will never tire from saying this but I have learned so much from each one of you! You guys have inspired me to do better.. I wish you all the very best for your future endeavors! Such a beautiful journey this was… now.. on to the next one Insha’Allah!

Abdullah and Mahjabeen come from very different backgrounds but the two connect at heart because of the similarity they share. Both of them are less mature and sensible than other people their age. They face insults from family and friends for the blunders they make. After losing the ones they initially wished to marry, the two end up as husband and wife. Problems magnify when they do not use their brains enough and fall prey to those who are against their relationship. The list includes Abdullah’s ex Shanze, essayed by Yashma Gill, and his stepfather Sarwar, played effortlessly by Omair Rana. Sarwar is attracted to Mahjabeen and had even tried marrying her before Abdullah did. He harasses her around the house, manipulates her and succeeds in creating conflict between the couple.

Pyar Ke Sadqay then follows how the two are first sent apart and then get back together, with other key characters evolving as the story progresses.

I want to clarify my stand on what I said in a recent interview regarding my co star @omairana. I was talking about how it was awkward doing romantic scenes with him for the first time as we had never worked together before. Omair was very professional and an excellent artist to work with. He is my friend and I have great regard for him and his family so please stop trying to build controversy where it doesn't exist. It is tragic to see how people are trying to tarnish his and his wife's reputation without any proof of injustice done. My experience with them as a family is a wonderful one as they are polite, civilized, educated and decent people. Stop harassing them as they do have friends in this industry that will take action against such misconduct and misinformation as well. Atiqa Odho

Pyar Ke Sadqay writer Zanjabeel Asim Shah of Cheekh fame must be credited for knitting the plot really well. She made complex issues digestible for masses amidst a budding love story and a comical tone. As Mahjabeen and Abdullah learnt about themselves and got back together, Sarwar tasted his own medicine. His wife and Abdullah’s mother Mansoora, that Atiq Odho played with grace, realized what she really needed in life to be happy. It was not a man like Sarwar but the peace within herself and the happiness of her two children. Abdullah’s sister Washma, essayed by Srha Asghar, was one of the most sensible people in the house. She was headstrong, vocal and tried to bring everyone to the right path.

Besides, Sharmeen Ali as her aunt was a breath of fresh air as opposed to all the phuppos we see in our plays. Similarly, Salma Hassan as Mahjabeen’s mother Seema stood by her husband and daughter and did not teach the latter to give in to circumstances. She was the strongest pillar in Mahjabeen’s house. Together these women worked to not only make their lives better but also to maintain peace in the households.

Read: Pakistani dramas: Where are the stories about female friendships?

Bilal Abbas Khan as Abdullah and Yumna Zaidi as Mahjabeen picked up great reviews for their innocence and lack of intelligence. They certainly complemented each other, as everyone around them teased them. Despite all odds, the two managed to make a place in each other’s hearts. Eventually, they realized how important being together was for them and took the right steps. What is important to note here is that nobody pressurized them, it was their own understanding of themselves. Lastly, Pyar Ke Sadqay touched upon male chauvinism as Abdullah rose above that. Mahjabeen too forgave him only when she saw her worth in his eyes.