The toddler’s family say the IOK police killed his grandfather, a claim denied by officials 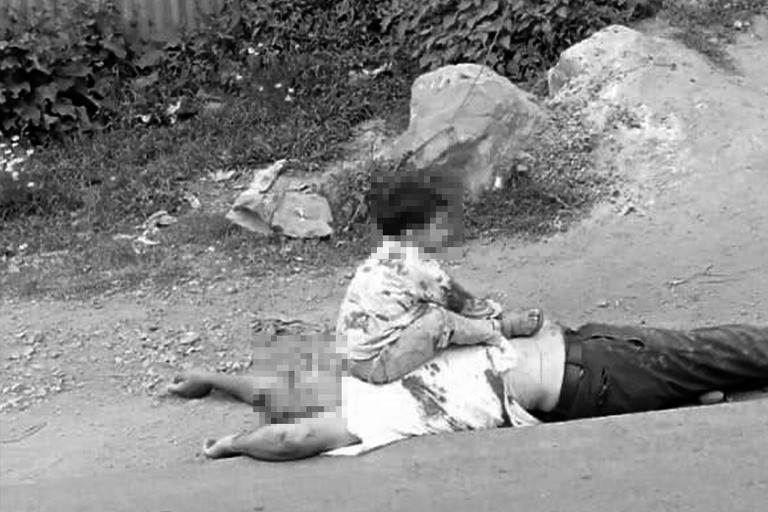 KARACHI: A picture showing a three-year-old child sitting on his grandfather’s bloodied body in Sopore town of Indian-occupied Kashmir has been widely shared on social media since Wednesday.

The image has stirred outrage in Indian Kashmir, with the family of the deceased accusing the police of killing the 65-year-old man, identified as Bashir Ahmed Khan.

The Indian police rejected the allegations, saying that the family was under pressure from militants to blame the death on the police.

However, The Wire, an Indiana publication, reported that the boy is now also saying he witnessed the police murder his grandfather.

“When this reporter met the family at their home on the outskirts of Srinagar, they said the three-year-old boy, AB*, when asked who killed his ‘papa’, had told them that the police did,” The Wire’s story stated.

They quoted the boy saying “goli mari” (he was shot) when he was asked what happened to his grandfather. By whom, he replied “Police wale ne” (by the police).

According to Al Jazeera, Khan’s family also accused the security forces of putting the child, whose name has been withheld to protect identity, on his grandfather’s body “for taking pictures”.

Read: Documentaries and books that will help you understand Indian Kashmir

A spokesman for India’s Bharatiya Janata Party (BJP),  Sambit Patra tweeted the photo while mocking it and captioning it: “Pulitzer Lovers??”

Meanwhile, artist Mir Suhail paid tribute to the Khan and his grandchild:

A prayer for #Kashmir, for our grandparents to hold their grandchildren close, and not have them mourn on their dead bodies. For the military men and #occupation to leave and for meaningful freedom to take its place. pic.twitter.com/mYxJJX9uOh

Documentaries and books that will help you understand Indian Kashmir