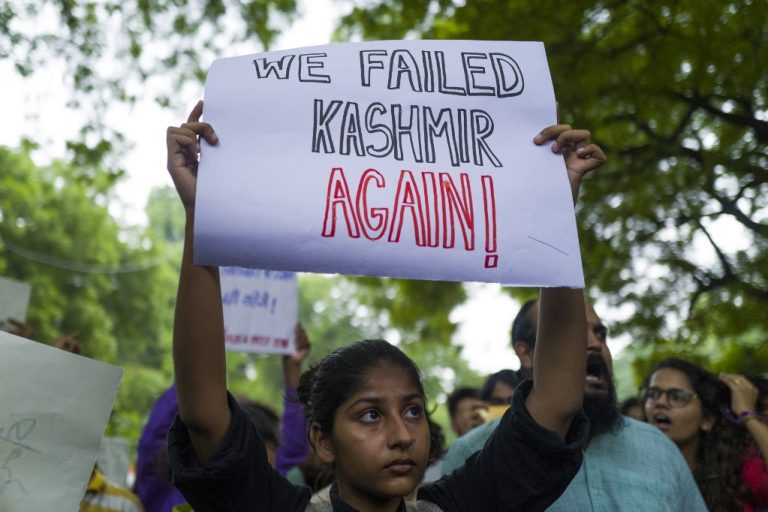 An activist and supporter of Indian left wing parties holds a placard during a demonstration to protest against the presidential decree abolishing Article 370 of the constitution giving special autonomy to Muslim-majority Kashmir, in New Delhi. PHOTO: AFP

The Indian government announced its decision to repeal the special status revoke that allowed a portion of autonomy to occupied Kashmir, which is a Muslim-majority region.

The decision to revoke the seven-decade old Article 370 means that Indians from outside the region will have the right to buy property and move there permanently. Many fear that this will lead to a transformation of the demographics of the majority-Muslim region.

The Pakistani government has expressed its opposition to this decision, with Pakistan’s Foreign Minister Shah Mehmood expressing his concerns over the issue by saying that there is an active threat of ethnic cleansing and genocide in occupied Kashmir, after India has revoked Article 370.

The decision was followed by the government shutting of network and cellular activity in the region which has lead Kashmiris living outside of the region to narrate their views/observations of the current living situation under occupation in Kashmir, on Twitter. The hashtags: #KashmirBleeds, #StandwithKashmir, #KashmirStory are becoming viral with users demanding a recognition of the right to self-determination and urge the fair protection for the people of Kashmir. Social media users are changing their profile pictures to red for #KashmirBleeds in solidarity with them.

Firstly, only state subjects i.e. Kashmiris can own property in Kashmir. It’s abrogation means India would have unchecked access to and ownership of Kashmiri land. The first step to how occupied territories are erased off world maps.

Spoke to my 7 yr old son who is in #kashmir via video call before the Internet was snapped. Took a screenshot of him. Thats what we have been reduced too.

May Allah look over the people of Kashmir.

1) India has turned Kashmir into a black hole right now. With normal life thrown out of gear, no clarity on the situation, no advisory/communication for local people from the government, there's panic, speculation and rumor-mongering all around. Phones and internet are off.

I'll be posting links to tweets, online resources, and other useful updates regarding the situation in Kashmir within this thread. Please share widely and stay aware. #KashmirBleeds #KashmirUnderThreat #SaveKashmirSOS

For the last few years, there is not a single day when I have not doubted my choice of living out of Kashmir, & that feeling only gets bigger on days like this. Right now all a Kashmiri wants is to be home with parents – to face death or whatever has to come – together. #Siege

There's no SWAG in this picture.

No shotguns, no bulletproof vests and definitely no "behind the scenes" backup.

Also, here's a useful article with some context, both current and historical, that you can all read. https://t.co/vfUnV6Uh4B

Dear @makemytrip I appreciate this gesture. But no, I will not cancel my Kashmir trip. I am not a tourist, not a pilgrim not a soldier on posting. I am travelling home to be with my family. I will stick with Kashmir through its thick and thin. pic.twitter.com/R65VqaiLEm

After rumours of curfew, I called Dad to ask if everything was ok. Dad to me:We have seen bad times, there is nothing worse they can do now. Our lives r in Allah's hands, we live & die as per His wish. We r a generation raised by such parents with unflinching faith & resilience.

We are all scared. But today wht i found different is tht Kashmiris while being scared are also aware of things beyond that. It is almost like "we don't want to but if we have to we will face it".
Decades of conflict have shaped us. Perhaps with each event we became more clear.