From Parasite taking over the Academy Awards to Billie Eilish becoming a meme, here's a list of our favourite moments 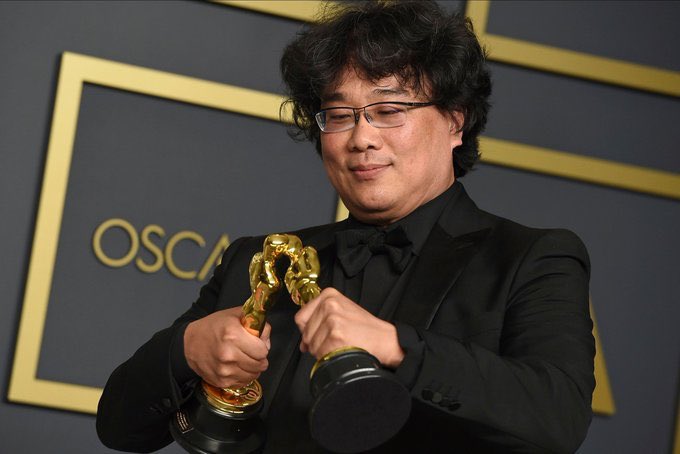 The Academy Awards 2020 wrapped up in Los Angeles Sunday night, with Parasite winning Best Picture of the year.

Here’s a list of our favourite moments from the night:

1. Parasite takes over the Oscars

2. Bong Joon Ho being his awesome self

Director Bong Joon Ho clearly won the night, not only with his collection of awards but also his to-the-point and modest speeches. For his best director award, he paid tribute to Martin Scorsese, his fellow nominee and clearly an inspirational figure.

He also gave us a endearing moment on stage after winnign his first Oscar. Look at him admire his award and chuckle to himself!

The South Korean director was  a notable character behind the scenes to, with this being perhaps are favourite moment of the entire night:

Joaquin was just a young boy when his brother, rising star River Pheonix, died from an accidental overdose. Year later, the actor made sure to mention him in his acceptance speech for Best Actor.

Billie began trending on Twitter even before she took the stage to perform a song as camera’s caught her scoffing at a skit being performed by comedians Maya Rudolph and Kristin Wigg. She is 18 after all.

Soon after, Billie took the stage with her brother to perform a cover of The Beatles’ Yesterday during the Oscars’ In Memoriam tribute

The rapper took the stage to perform 8 mile, an iconic song form 18 years ago though. A strange but welcome move. He killed it!

Look, if you had another shot, another opportunity… Thanks for having me @TheAcademy. Sorry it took me 18 years to get here. pic.twitter.com/CmSw2hmcZo