Here’s what you need to know about the #StudentSolidarityMarch 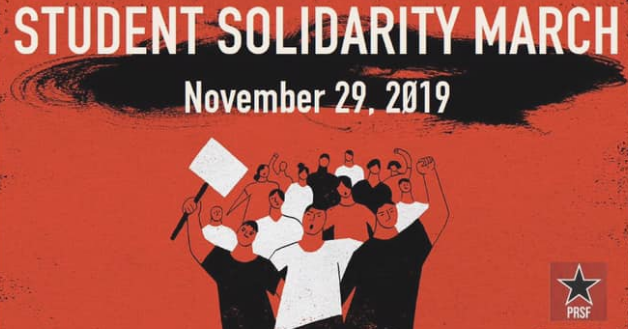 KARACHI: Student unions in Pakistan have a terrible history. In 1984, military dictator Zia-Ul-Haq slapped a ban on student unions under the pretense that they instigated violence. The ban was subsequently lifted by Benazir Bhutto in 1989, but that was perhaps a one-time thing because the ban still exists and there is still active suppression of these student-led initiatives.

What makes student unions so incredibly important and necessary is the awareness that they generate among the youth. An active need to revive these organizations ties in with the ever-expanding need for growth and intellectual stimulation on issues protecting student’s right to education, campus safety and so on. With regards to this notion, last year a Student Solidarity March organised by the Progressive Students Collective (PSC) was relatively well-received all over Pakistan. In an open letter to Prime Minister Imran Khan, the PSC highlighted issues such as worsened quality of education, poor conditions of university campuses and hostels, ban on student unions and lack of freedom of speech that students face.

This initiative was showered with support from students from all over Pakistan who took part in this march in their respective cities.

Hundreds of leftist students have organised themselves despite a ban on students unions in the country. Today was a big day for the students who marched on the streets of the country #StudentsSolidarityMarch pic.twitter.com/uFYtMn1iFu

What a day it was for left politics, direct action and student activism in Pakistan. Watch this short video for a glimpse of the successful #StudentsSolidarityMarch in Lahore. Congratulations to @PSCollective_ and to everyone who marched today! pic.twitter.com/hyEuzTQhNi

Some horrendous incidents have come to light in the year 2019, such as the University of Balochistan scandal and the hostel crisis of Islamabad.

Imploding Pakistan??
Universities have vastly inadequate hostel space & students are being thrown out onto the streets from their accommodation in E-11, Islamabad.
What are students supposed to do to get an education in Pakistan?
This is how the country turns into Terroristan pic.twitter.com/zua9gwBQbe

These are part of the vast other issues that students are subjected to in Pakistan. Due to this, the leftist students federation known as the Progressive Students Federation (PRSF) is organising another Student Solidarity March that is to be held on the 29th of November of this year.

The federation says “enough is enough” when it comes to some unfair aspects of the student crisis. In a description of the event on Facebook they voiced, “Decades of unhinged policy priorities and suppression of student unions and representation has led to declining public investment in education and education authorities that are completely impervious to demands for change.”

Many have taken to Twitter to speak up in favour of the event, with some of the organizers mobilizing for it at the Faiz Festival 2019 in Lahore.

Our future is bright! pic.twitter.com/zbLWIfwi98

The march is an open call to students in particular to demand a better response from authorities responsible as they added, “our decrepit education system must be overhauled with students at its center, as recognized stakeholders in the process of reform. Our rights, of education, of thought, of shelter, of safety, which have stripped us of the ability to have a voice must be recognized and protected.”