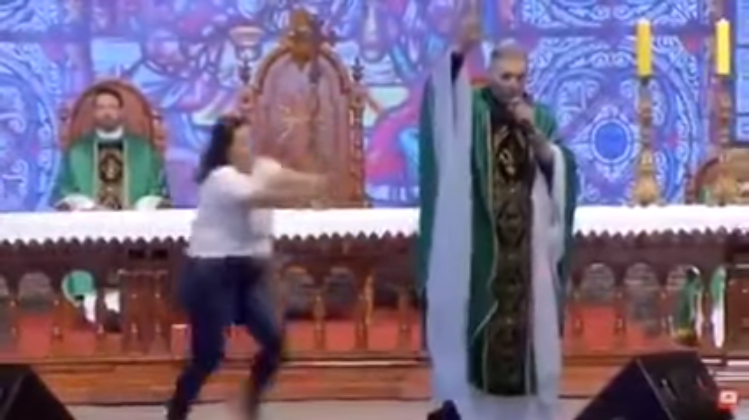 KARACHI: A Brazilian priest known as Father Marcelo Rossi was addressing the audience during a Mass held in the city of Cachoeira Pulista in São Paulo, when a woman rushed towards him and pushed him off the stage and towards the crowd. According to a report by Rio Times, the Mass was part of the closing event of a retreat, held by Catholic TV Canção Nova and hence captured the shocking moment to go viral on social media.

In Brazil a priest says "fat women cannot go to heaven!"
And then… https://t.co/WiPWSvG4Ur

The post appalled many as the user who uploaded the video claimed that the priest was making fat shaming comments and directed it as the reasoning behind why the woman pushed the priest into a sea of people (estimated to be around 50,000 in attendance) at the event.

However, many Brazilian news reports suggest that the woman’s friends explained that she was mentally unstable and that was why she was able to breach security, invade the altar during the celebration and push the Father Marcelo. The woman was taken away by the police but later let go as the priest decided not to press any charges.

The original video has collected over millions of views making it go viral and gathering a bunch of support for the woman (but in a shamefully funny way).

She will go to heaven for sure!

Well, I guess she thought she was going to Hell anyway there was nothing to lose! pic.twitter.com/RSGbcS78kP

Demi Lovato shuts down body-shamers with her latest photo