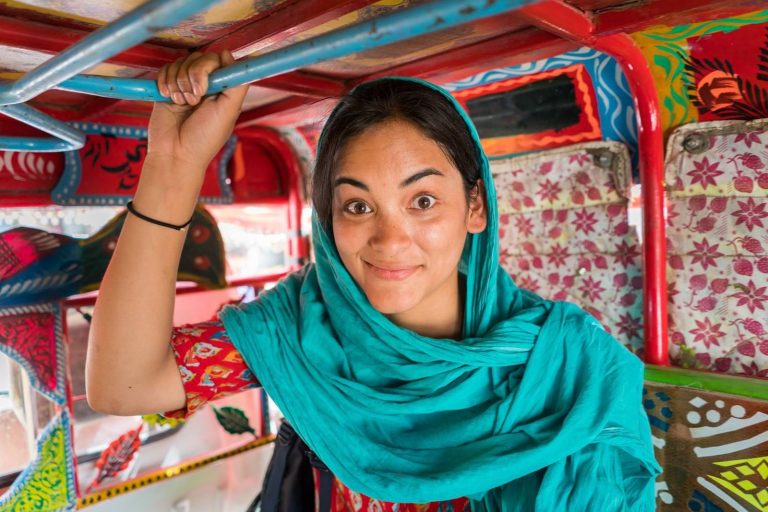 KARACHI: American travel blogger Alex Reynolds, who runs the ‘Lost with Purpose’ travel blog, released a video claiming how and why she was unable to present at the recently-held Pakistan Tourism Summit.

According to Alex, however, she was the only one who was excluded from sharing her presentation, which was not as positive as the others and a little more critical.

Alex has been writing and photographing Pakistan since 2016 and has visited the country five times.

The presentation she prepared for the summit was titled the ‘The Dangers of Positive Media’, which spoke about how dangerous social media coverage is for the future of tourism in Pakistan and what to do about it.

“I had to submit my present beforehand… but then the next day they said ‘oh you know we might not have time for everyone to present at the prime minister’s panel’. But magically, they did have time for everyone else to present … except me. And what do you know, all the other influencers’ presentations were overwhelmingly positive and not critical at all,” Alex said in her video.

She goes on to say that she in fact loves Pakistan and wants other travelers to come to the country and experience what she has but without the problems she faced.

“Luckily, we live in an internet era. If a voice is silenced in once place, it can appear in another,” she says before jumping into what exactly was included in her presentation.

Here are some of the problems Alex identified in travelling to Pakistan:

Alex says Pakistan is not an easy place to travel in and the current social media coverage is misleading. “Contrary to endless vlogs of happy foreigners floating around the country, Pakistan is actually a pain in the ass to travel in.”

She goes on to say that independent foreign travelers are likely to encounter unofficial travel restrictions, harassment by security agencies, unclear bureaucratic procedures, and then some. She also adds quotes of four other foreign travelers relating their own experiences of harassment and detention.

Watch: Girl With The Green Passport

“Big name influencers have recently to Balochistan but they were sponsored or their trip was facilitated,” she says, adding that getting the NOC to travel to the province can take over seven weeks.

Alex suggests that the government should get rid of some of the travel restrictions or provide a list of where and how to get NOCs. She adds that the police and security agencies have to be instructed to stop harassing foreigners. “That’s not normal.”

According to Alex not everyone is going to have the same experience as white people. “White people are out on a high pedestal in Pakistan. White travelers receive royal treatment. Travelers of colour? Not so much.”

She adds that local tourists and overseas Pakistanis make the majority of people who travel to Pakistan, and they are the target market for the tourism industry.

She says she’s experienced this first hand, since people often mistake her as a local in Pakistan.

Read: Young Love: I took a solo trip as a married woman

She suggests that Pakistan get over their white complex and not feel validated by white people. More practically, she adds, it’s important that local influencers should be represented at tourism summits like the one that just took place.

“The government, the media and even you, the viewers, need to start supporting more local influencers and influencers of colour,” says Alex.

According to Alex, Pakistan is not ready to have the “average, inexperienced, ignorant” tourist coming here yet. The current positive social media coverage doesn’t talk about how sensitive the country is and how careful they need to be. For example, she elaborates, tourists may not realise they need to keep their “atheist beliefs to themselves” or couples may not realise they cannot show public displays of affection.

“Men won’t be aware of how risky it could be to flirt with a Pakistan woman, especially in front of her brothers or father. Many women may not realise that they might be the only woman on the street more often than not.”

She ends the video by saying that the government and the media must allow transparency over these highly positive narratives about travelling in Pakistan, and silencing critical voices.

Watch her Alex’s full video below: