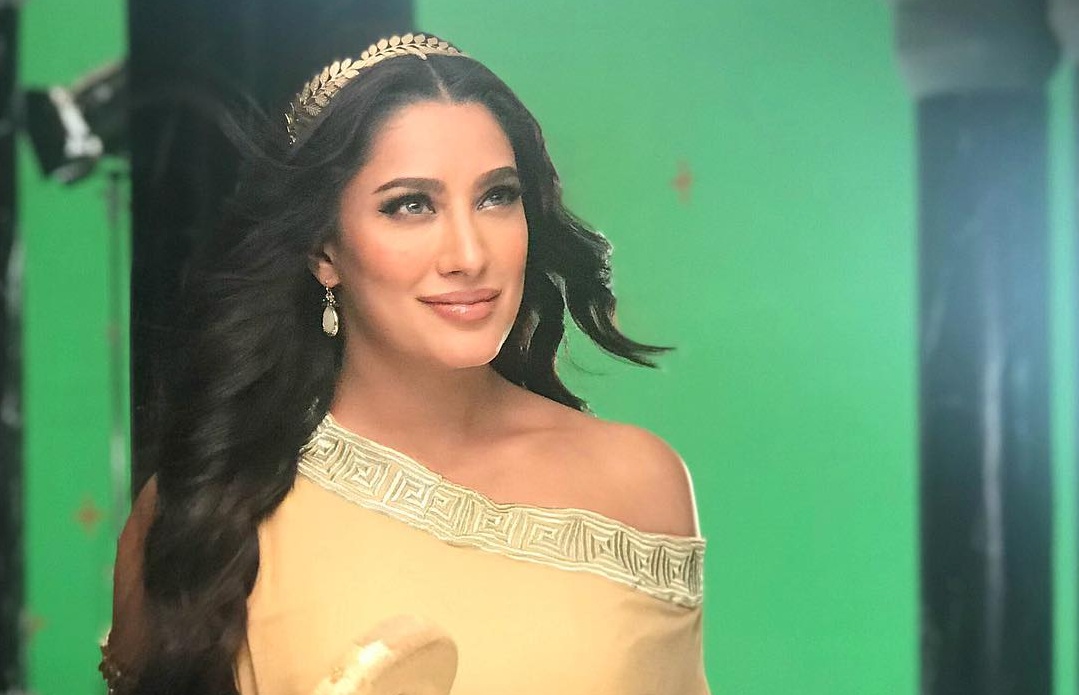 KARACHI: Pakistani film star Mehwish Hayat shared some really good news about her professional accolade but some elements of Pakistani society chose to condemn her for it.

The award-winning actress announced on her social media that she will be receiving Tamgha-e-Imtiaz, the fourth-highest decoration awarded to a civilian in Pakistan. Hayat will be bestowed the honour on Pakistan Resolution Day, which falls on March 23, by President Arif Alvi. The Actor-in-Law star has been chosen to receive this medal of honour for her contributions to Pakistani cinema.

As great as the news sounded to her fans, mentors and colleagues, there were people who did not take the news too well, discounting her credibility and integrity on social media, something which the actor herself addressed in a tweet.

Hayat called out an online Urdu news outlet siasat.pk that ran a story, alleging she is in a relationship with a Karachi-based politician, which is being given this prestigious civilian accolade.

“Is this how you celebrate your artist’s success by vilifying their character?” the Na Maloom Afraad implored.

This is shameful https://t.co/7chd70ABKZ this is how you celebrate your artist’s success by vilifying their character?! This is libellous and defamation. Withdraw this article and post a written apology else legal action will be taken against this! https://t.co/sv1WzPdaCM

In its reply, the news outlet stated it only reposted the said report that was published in another Urdu news outlet, Express News, and that if she has a reservation, she should take it up with them.

With all due respect, we are a reporting source only and only reposted Express Tribune's article (as it is clearly visible). We did not 'fabricate' it with an intention to 'defame'. If you condemn it and have reservations regarding the claims made by them, speak to them

The misogyny that unraveled in the aftermath of Hayat’s recent accomplishment, however, is nothing new for most female members of the film community in Pakistan.

Mubarak @MehwishHayat 🙌🏼💕 @siasatpk Enough with this, it’s a regular pattern. Sick way of getting clicks!! https://t.co/FjDsZtV7AO

Other actresses also spoke up for Hayat and condemned the naysayers.

In her statement of solidarity, Ushna Shah congratulated the Tamgha-e-Imtiaz honouree, saying that the decoration is not only well-deserved for her success in the film industry but also a success for “bruising hundreds of fragile male egos!”

So proud of @MehwishHayat for not only winning the well deserved Tamgha-e-Imtiaz but bruising hundreds of fragile male egos! #congratulationsmehwishhayat your contributions to Cinema are no less than your male counterparts who have been awarded this.

@MehwishHayat is one of the top actresses of the country. Mehwish your versatility & hard work is second to none. Don’t listen to the haters,you totally deserve the award!

#congratulationsMehwishHayat I stand with ALL my fellow actresses without prejudice ❤️❤️

Male celebrities also spoke up in support of the Load Wedding actress.

“Congratulations, Mehwish – your work speaks for itself. That someone would defame your character for the sake of retweets and gossip is absolutely disgusting,” tweeted Osman Khalid Butt.

Congratulations, Mehwish – your work speaks for itself. That someone would defame your character for the sake of retweets and gossip is absolutely disgusting. https://t.co/lst5X2gsGm

@MehwishHayat we all are really proud of you . Congratulations

Congratulations @MehwishHayat you deserve its truly 😍isee liye you didnt get lux cause you were meant for a bigger honour👏👏👏👏#TamghaeImtiaz pic.twitter.com/AnngZx0q0z

“Congratulations Mehwish Hayat on your Tamgha-i-Imtiaz. We are all proud of your immense hard work that has led to this achievement,” said Humayun Saeed.

Congratulations Mehwish Hayat on your Tamgha-i-Imtiaz. We are all proud of your immense hard work that has led to this achievement. Congratulations and best wishes to all the other recipients of Sitara-i-Imtiaz and Pride of Performance as well! @MehwishHayat pic.twitter.com/5pdlYAJCkY

@MehwishHayat Congrats Buddy , its really sad how certain portals have stooped down to the level of defaming you. Your contribution to cinema 2013-18 is a big punch in their face. Enjoy your success 2019 is yours.

Congratulations to @MehwishHayat for #TamghaeImtiaz you have always shown excellence towards ur profession & its no surprise that you are getting the medal. Always been proud & fan of your work Allah bless you always. Congratulations to everyone who are also getting recognition

Famed Faysal Quraishi also expressed support and called out “substandard journalism” that came out of the speculations on the jury.

Very shameful comments …what kind of journalism is this …#supprt @MehwishHayat https://t.co/sqmHFHQHCT

This is disgusting indeed. @MehwishHayat deserves then any one. Stay strong https://t.co/OJiQpljvRM

Mehwish Hayat has earned this national honour based on her art. Have some shame while discrediting women artists and attacking their character and invalidate their art just to sell your content @MehwishHayat https://t.co/PB5frmgJZL