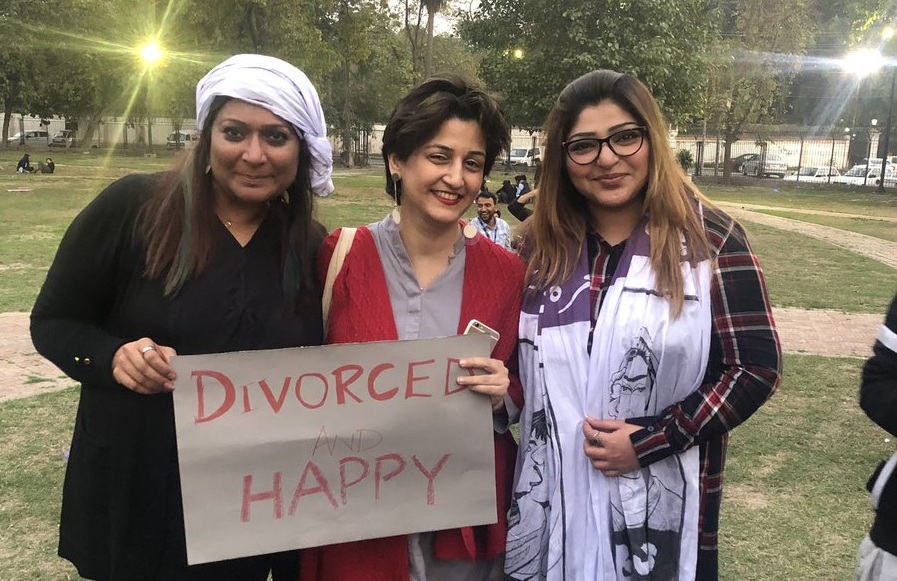 KARACHI: If there’s any other word that is taboo besides ‘sex’ or ‘menstruation’ in Pakistan, it is ‘divorce’. The stigma attached to the subject makes many, especially women, from talking about it. Not to mention, the blame of failing at marriage always falls on a woman, even talking about one of the most traumatic incidents of one’s life is not considered okay.

While the Aurat March last Friday triggered a lot more sentiments and much less constructive debate, one major conversation that stood out was on ‘divorce. A picture of three women — including lawyer Nighat Dad and journalist Sabahat Zakariya — from Lahore’s aurat march, holding a poster ‘Divorced and happy’ was frowned upon by another Twitter-user, describing herself as “someone born and brought up in London.” See the tweet below:

Born and brought up in London, until now I thought I was relatively open minded, but from the placard these three Pakistani women are holding, I'm far too old fashioned and backward 😥 pic.twitter.com/KYcnv5n70f

While several people called her out on her statement and gave her a reality check on how divorce is never a happy decision and there’s nothing wrong to be happy once a person’s difficult marriage is over, what followed has been an eye-opener. People generated a thread on stories of their abusive and toxic marriages and how they reclaimed themselves and utilised their potential to stand up for themselves.

Here are a few mentions of women’s struggles while they fought for divorces, something that is very difficult to get hands on in Pakistani courts, despite Islam giving women the right to ask for a khula:

1. This proud moment for the woman whose teacher forbade others to talk ill of her student’s divorce.

6yrs ago, one of our classmates in Tarjuma class got khula after a long battle in the court. We were told by our teacher, "Khabardar kisi ne uskay saath afsoos kiya, Allah ne usko barri musibat se nikala hai jo ke khushi ki baat hai!"
She came to class & we celebrated it with her https://t.co/sxsN5sFLm7


My ex husband gave me divorce because he wanted to marry another woman, didn’t want to support me & 6 months old son also my father told me not to put up with physical abuse. Mind you I started my law practice & work after divorce & made Pakistan proud at several occasions. https://t.co/JZ85Y2mVlu

Dad’s work on internet privacy and for supporting women has also been acknowledged by the government of Pakistan. On International Women’s Day, she along with others was recognized for her work in digital rights.

Also govt of Pakistan is very proud of this divorcee’s work on digital rights for her country and globally that ministry of Foreign Affairs acknowledged her on 8th March along with other notable women of Pakistan. Read for more details https://t.co/613As0NMMW #AuratMarch2019 https://t.co/JZ85Y2mVlu

Even United Nations gave her an honorable mention

3. This woman who’s inspiring on another level

21 wHen i got married, 22 i had a baby,23 divorced cause my x husband couldn't stomach an educated girl "tum hath se nikal jaogi". Put up with abuse & was thrown out with my 3 month old baby. I graduated with honors & now I'm a philanthropist, entrepreneur & HR professional! 💃

4. This story that goes around and haunts every desi woman

My ex would say the same kay parh likh k tmhara dimagh kharab hogya ha. My mother tells me that they wont let my younger sister gor for higher education as they have seen how it makes women rebellious.

5. This story on how lives do really change after divorce.

More power to you https://t.co/4EOUY2Bpl8 younger cousin got divorced,she got married young,the ex used to beat her&she chose to get out of that hell.Shes now pursuin a career,never seen her happier. You're representing a lot of girls here.