Why is the Saudi crown prince’s visit to Pakistan such a big deal?

Everything from Mohammad Bin Salman's 2-day visit, in case you're not clued in 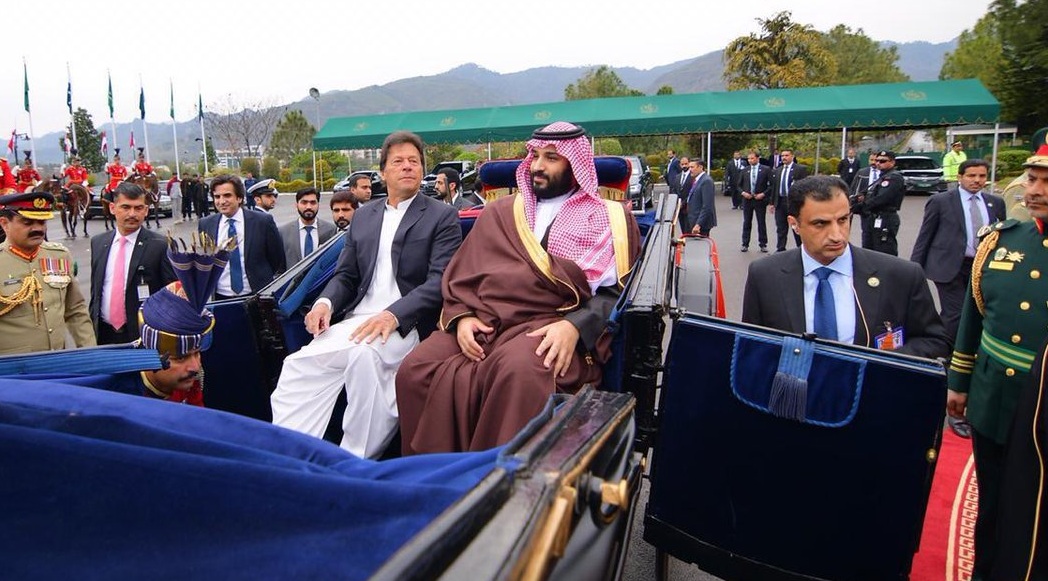 KARACHI: The Saudi Arabia’s crown prince visit to Pakistan is in progress, and it’s all everyone is talking about. The previous week’s news cycle has been filled with details about the lavish visit. From the booking and rental of 300 luxury cars to being escorted by the Air Force, Pakistan did it go out of its way to welcome the prince and commemorate the occasion.

A historic moment as His Highness, the Crown Prince of the Kingdom of Saudi Arabia, Mohammed Bin Salman is received by Prime Minister Imran Khan on his arrival at Nur Khan Air Base.
Long live Saudi-Pakistani brotherhood! 🇵🇰🇸🇦#WelcomePrinceMBS #CrownPrinceinPakistan pic.twitter.com/tXRorDQ7J5

Crown Prince Mohammad Bin Salman is the first Saudi leader to visit Pakistan in 15 years.  He arrived in Islamabad on Sunday for a two-day visit, and will be heading to India and China after. According to CNN, the Asian tour is widely seen as “an attempt to bolster ties and improve the kingdom’s image after a troubling year.”

If you’re not clued in though, here’s everything you need to know to keep up-to-date:

The capital was blanketed with posters of the prince who arrived in Islamabad as fights jets from the Pakistan Air Force escorted his plane through Pakistani airspace. The crown prince was welcomed with a  21-gun salute. The prince was personally driven by Prime Minister Imran Khan to his official residence, where a banquet and cultural show was performed. Front pages of newspapers were plastered with his photo and almost all newspapers lead with the story of his arrival to the country.

According to Al Jazeera, “Pakistan has shown appreciation by treating Prince Mohammed’s trip as the biggest state visit since one by Chinese President Xi Jinping in 2015, soon after Beijing announced plans to invest tens of billions of dollars on infrastructure in Pakistan as part of China’s Belt and Road initiative.”

Seven MoUs have been signed, covering $20 billion worth of Saudi investment in categories of agriculture, food processing, tourism, petrochemical and minerals. There is also been an invitation to Saudi Arabia to make use of opportunities in China-Pakistan Economic Corridor (CPEC).

“We believe that Pakistan is going to be a very, very important country in the coming future and we want to be sure that we are part of that,” the crown prince said on Sunday during a joint press conference.

The deals are expected to provide a much-needed relief for Pakistan’s ailing economy, as the country negotiates a bailout with IMF.

As of now, Crown Prince Mohammad Bin Salman has ordered the release of over 2,000 Pakistani prisoners in Saudi jails. In his meeting with Prime Minister Imran Khan yesterday, Crown Prince had promised to deliver “whatever we can do” for Pakistanis in Saudi Arabia when the PM mentioned the suffering of Pakistani migrant workers in the Kingdom. “There are some 3,000 Pakistani prisoners there and we just would like you to bear in mind that they are poor who have left their families behind,” said Prime Minister Khan, according to Dawn.

This is being rendered as a huge move by human rights activists and journalists. These were prisoners who had been taken into custody mostly on petty crimes, with no lawyer representations and language barriers making their ordeal worse.

Soulful request by @ImranKhanPTI & generous goodwill generating response by SA. It is IK's empathy & track record of standing for those most vulnerable (by building hospitals & colleges & here speaking for hapless PK prisoners in Saudi) that is endearing. https://t.co/woxi3lF0Hy

Look, I know there’s a lot wrong with IK and his government. I also understand political climate determines things more than institutional change. BUT Nawaz Sharif did not raise this issue when he could and should have. Good on IK. 2100+ families’ lives have changed overnight.

We must appreciate IK for raising the issue of Pak prisoners in Saudi Arabia (mostly for petty rather than heinous crimes ) and MBS for ordering their release immediately. IK should order the same in Pak because charity begins at home.

The crown prince was conferred the Pakistan’s highest civil award, Nishan-i-Pakistan, at an investiture ceremony on Monday. He arrived at the President’s house in horse carriage.

Opposition parties, mainly the Pakistan’s Peoples Party (PPP) and Pakistan Muslim League (PML-N), were not sent any invites to be part of what is being rendered a historical occasion, according to media reports. Some criticised the PTI government for not keeping their differences at home and stretching it to the extent of when a foreign dignitary is on a state visit to Pakistan.

All of Pakistan 🇵🇰 appreciates the release of 2017 Pakistani prisoners held in Saudi Arabia. The rest of cases should be reviewed.Unfortunately it is the Govt that is not using the opportunity to look at this as an all of Pakistan visit in the way it has blocked opposition out.

Imran Khan said, in his ruling, the nation will have one Pakistan.

We are witnessing, we have two Pakistan in his ruling, in which the opposition is not invited, and only the ruling party is allowed.

Quite mature of the opposition, mainly the PPP and the PML-N to welcome the Saudi Crown Prince's visit to Pakistan DESPITE the fact that the government did not invite any opposition parties to the ceremony in honour of MBS. #CrownPrinceinPakistan

That’s what every PM says Mr @ImranKhanPTI @pid_gov it’s a shameful act, that your government have not invited any of the opposition parties, & If depicts that you are selected not elected PM https://t.co/FCDhw9J9YA

Not only inexperienced but lack of showing character. He should have invited Parliamentarian (Opposition parties) at the dinner.