In Instagram post, Colleen Grady wrote her phone was lost in the ‘poorest country’ and ‘most scammy cities’. Her phone was found and returned, FYI. 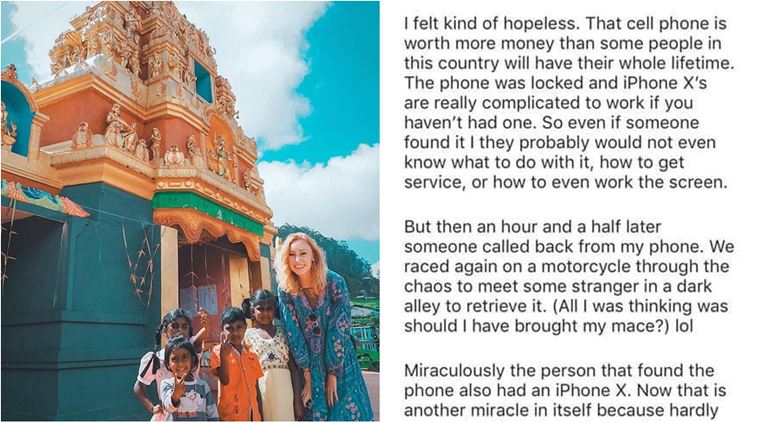 By Cutacut Editorial Team January 9, 2019
KARACHI: An American blogger sparked outrage when she posted a very ignorant and racist account of how she lost her iPhone X on the streets of Jaipur, India.

“I felt kind of hopeless. The cellphone is worth more money than some people in this country will have in their whole lifetime. The phone was locked and if someone found it they probably would not even know what to do with it,” Colleen Grady wrote in her now-deleted Instagram post, according to ScoopWoop.

Dear Coleen, there are many people here who are using iPhone even before you knew what an iPhone is. And get yourself updated before commenting anything like this. And if you are so rich where is your personal security handling your safety ? #Indian #realitycheck #atithidevobhav pic.twitter.com/NW7w8nZcCy

Read:Do we need white people to tell our women how to behave in public spaces

“Yep, I lost it in the poorest most overcrowded country I have ever visited and one of the most scammy tourist cities in all of India,” she added. She lost her phone while in Jaipur.

So, not only did she declare the entire Indian population too poor to own an iPhone but also questioned their collective intelligence. Talk about white entitlement.

She then told her Instagram followers that her phone was found by a fellow iPhone X user. “Miraculously the person that found the phone also had an iPhone X. Now that is another miracle in itself because hardly anyone in this country has an iPhone period.” She also mentioned that she should have carried mace since she had to retrieve her phone from a stranger in a dark alley.

After deleting the post, she wrote: “I’m sorry my words were perceived in  a way that were so far from my true feelings about this country and the people in it.”

Are you buying it?

So let me get this straight, a foreigner visits India, loses her iPhone X, an Indian guy goes out of his way to return the phone and she responds with blatant racist comments? 🤔 https://t.co/30lIEkRloE