Mahira Khan discusses trolls, click-bait culture and the power of being a digital influencer

Actor was joined by Mooroo, Ali Gul Pir and others at #021Disrupt conference 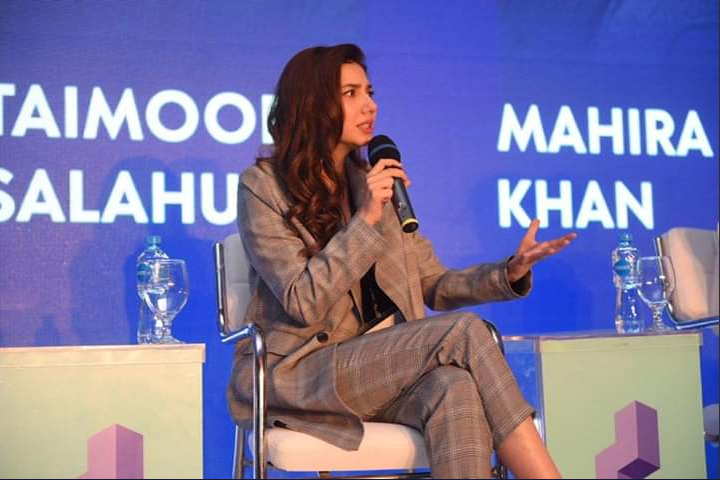 KARACHI: Celebrities, innovators, digital influencers and entrepreneurs gathered at the #021Disrupt conference, hosted by The Nest i/o, a technology incubator, in Karachi this past weekend. A panel discussion titled ‘Influence is Power’ was easily the highlight of the conference this year for several reasons: the witty Zarar Khuhro was the moderator, comedians Danish Ali, Mooroo, Ali Gul Pir and actor Mahira Khan brought the star power, Muzamil Hasan brought valuable insight as a digital content creator and Amna Niazi talked about being a celebrity stylist and a blogger.

Here’s what we learnt regarding their lives as digital influencers:

1. Mahira Khan is sick of her face being used as click-bait

Having recently launched Mashion, a fashion and lifestyle online publication, Mahira Khan spoke about how she has been careful to avoid using click-bait headlines because she knows what it’s like to be on the other side. “There will be some political story that has nothing to do with me and the publication will use a picture of me crying as their featured image,” she commented. But she also said she understands why publications do it. “It’s hard to put out meaningful information and making it sound catchy so that people actually visit your site.”

This was made evident when Muzamil Hasan, who’s made several viral videos, claimed that every influencer may look happy on the outside but on the inside “they’re all depressed”. In his closing remarks, Ali Gul Pir said that the government should look into curbing cyber-bullying, and Mahira agreed with him. “Bullying, whether it happens online or in real life, is the source of a lot of problems,” she said solemnly. Amna Niazi also weighed in on how she gets attacked for the littlest things online. She received a lot of hate from men and women alike for cutting her hair short, for instance. “Why did you do this, you look like a boy, are you going through a mid-life crisis” are some of the comments she had to deal with.

But Mahira did say that she has never blocked any of her trolls online. “I sometimes reply to them and that really freaks them out. This one time I tweeted something about breast cancer awareness and this one troll was doing what he does. I replied back to him and it probably really confused him,” she laughed.

Read: Mahira Khan explains why women are afraid of using the word ‘breast’

Hasan shared an anecdote of a telecom company that wanted to hire him to say a few lines regarding their services but was asking them to blatantly lie. “Only in Pakistan can companies get away with asking influencers to straight out lie about their products.” Ali Gul Pir also asked businesses to trust the artists. “We work with brands all the time, that’s how we earn our bread and butter. But we know our work. Trust us. Don’t ask us to compromise on our creativity,” he said.