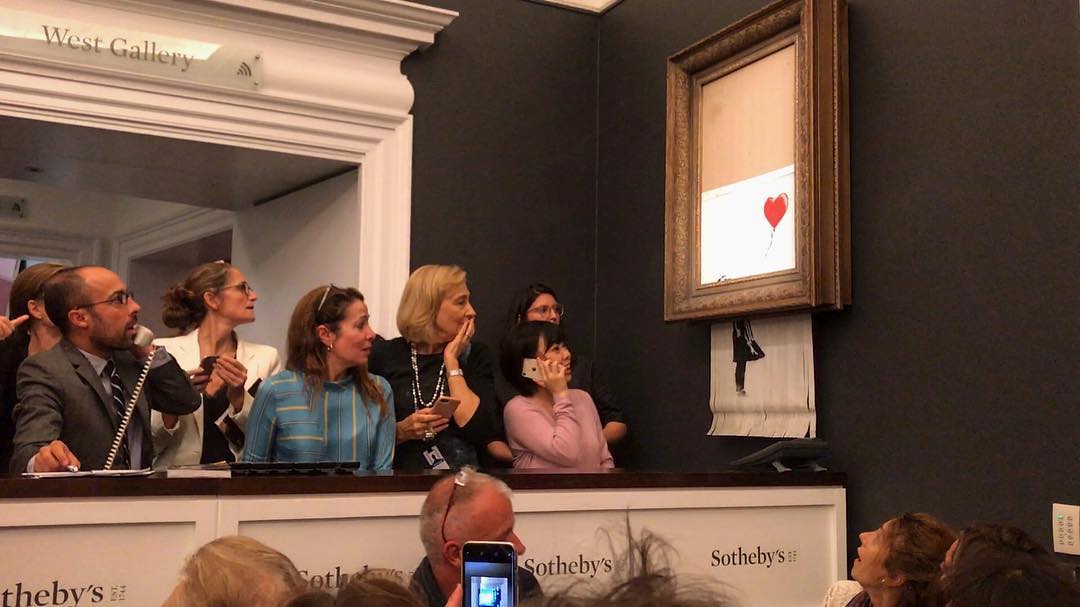 KARACHI: If you hadn’t heard of Banksy before this weekend, you’re bound to have heard of him by now.

Little is known about the mysterious British artist but what we do know is that one of his most famous paintings, Girl with Balloon, self destructed the moment it was auctioned off to a buyer at Sotheby’s Auction House in London for a whopping $1.4 million. “It appears we just got Banksy-ed,” said Alex Branczik, Senior Director and Head of Contemporary Art, Europe London.

The artist then shared a video on his Instagram account, showing he had secretly built a shredder inside the frame of the painting, which was activated the second the painting was sold.

. "The urge to destroy is also a creative urge" – Picasso

However, instead of becoming worthless after being shredded, the painting has nearly doubled in its value since the stunt. Sotheby’s has described the painting as a “framed work, spray paint and acrylic on canvas,” and notes that it’s “the first time in auction history that a work of art automatically shredded itself.”

Read: Review: While unpacking performance art is important, Mohsin Sayeed should not be the person to do it

The question remains though: Who is Banksy and why is his work such a big deal?

For starters, nobody knows his identity yet but we do know that he is British. He is well known for his political and satirical work on social issues such as corruption and inequality. According to The Sun, “Banksy has never been unmasked and it is believed his refusal to reveal himself started as a way of avoiding prosecution for vandalism.”

Banksy is known for his stunts. In 2005, he hung a canvas of a 19th century heroine wearing a gas mask on the wall of the Metropolitan Museum in New York. In 2006, he released an inflatable doll dressed as a Guantánamo Bay prisoner at Disneyland in California.

Review: While unpacking performance art is important, Mohsin Sayeed should not be the person to do it