A year in review: #MeToo

A timeline of the reckoning 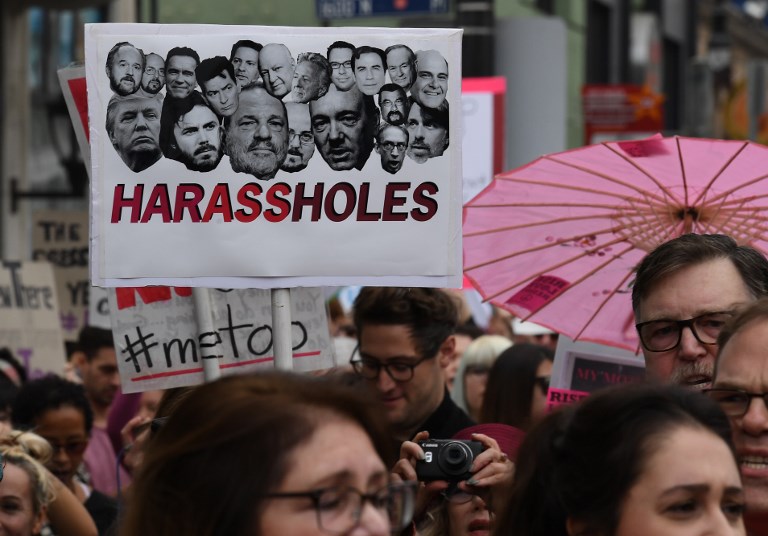 Victims of sexual harassment, sexual assault, sexual abuse and their supporters protest during a #MeToo march in Hollywood, California on November 12, 2017. Several hundred women gathered in front of the Dolby Theatre in Hollywood before marching to the CNN building to hold a rally. / AFP PHOTO / Mark RALSTON

KARACHI: It’s been almost one year since the Hollywood patriarchy was brought to it’s knees by two ground breaking investigative pieces by the New Yorker and the New York Times. Both articles brought to light a scary, hidden reality about one of Hollywood’s moguls Harvey Weinstein and his long, disturbing list of sexual violence, sexual harassment and sexual assault related offences. What followed was a global reckoning. Women all across the world came out with their important stories, and powerful men were taken down, globally, and here in Pakistan as well.

We’ve put together a timeline of the most important dates for you:

October 5, 2017: The New York Times and the New Yorker publish multiple allegations of sexual violence made against film and media mogul Harvey Weinstein.

October 11, 2017:: Weinstein is fired by his company in light of the allegations

October 18, 2017: Actress Alyssa Milano initiates a global campaign via twitter. She uses the words ‘Me Too’, previously used by activist Tarana Burke after an experience with sexual violence in 2006. Milano encourages women to come forward with their stories, using the hashtag #MeToo. Within hours, social media erupts with women all over the world sharing their stories, supporting one another through the pain, and collectively deciding that time’s up for the patriarchy.

If you’ve been sexually harassed or assaulted write ‘me too’ as a reply to this tweet. pic.twitter.com/k2oeCiUf9n

November 10, 2017: Five women come forward with detailed accounts of the sexual harassment they had been subject to by popular comedian Louis C K. The comedian apologises and is let go by HBO. In the weeks leading up to this, other big names such as Dustin Hoffman and Kevin Spacey have also been brought down with allegations of harassment and assault.

In the months that follow, actors such as James Franco, Morgan Freeman, Aziz Ansari, writers such Junot Diaz , content creators such as Paul Haggis, Stan Lee and Dan Harmon are all brought down one by one. Almost every story has a consequence – from social to professional boycott.

Following the death and rape of a 7-year-old girl in January of 2018 in Pakistan, prominent celebrities across the country started sharing their own stories.

January 9, 2017: Body of 7-year-old Zainab Ansari found in a garbage heap. It is discovered that she was abducted, raped and killed. Amidst a nation wide outcry, #JusticeforZainab begins to trend on social media as people come forward with accounts of how they were sexually harassed and assaulted as children.

January 13, 2017: Actress Nadia Jamil also joins the movement as she shares her story.

When I sexually abused it ws by my Kari Sahab, my Driver & then by a highly educated elite families son. Now a happily married business man in London. It’s across the board. Men abuse across the board. My family still wants me to stay silent. But the shame IS NOT MINE! Never ever

I was sexually abused by our cook at age 6. My parents took action but everyone remained silent as if it was my shame. At 34 I realised how it had impacted my life.the only shame is keeping SILENT #ChildAbuse #shame #NoMoreChildAbuse #MeToo #JusticeForZainab #HowToStopChildAbuse

#childabuse #saynotochildabuse #metoo The Maulvi who came to teach me the Quran abused me sexually .I froze in fear day after day .
Share in support of children subjected to the sick acts ..by so called custodians of our religion

April 11, 2017: A woman posts screenshots of her conversations with Patari CEO Khalid Bajwa, providing evidence of sexual harassment he has subjected her to. Bajwa steps down from his position as more women begin to take to social media, posting evidence incriminating him.

Under any false pretense and take advantage of them. It could be as trivial/important as asking for pictures you’re not willing to send. Attaching screenshots. Have confided in people over the years who can confirm his creepy behavior. Stop glorifying abusers/harrassers pic.twitter.com/qhudhTgwZx

A year into the reckoning, the patriarchy is far from gone. But a few brave women have made it easier for women all around the world to come forward with their story, to tell the world #MeToo, but also #TimesUp. We want to take a moment to celebrate all those who have come forward, despite the odds; who have fought the battle for all of us, across the world by holding the patriarchy accountable.