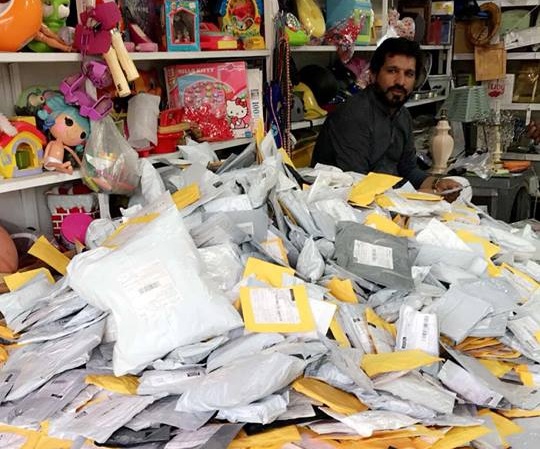 KARACHI: Ever ordered from Ali Express and never received it? You might need to head over to the capital city’s bachat bazaars.

Social media user Talha Saleem posted a picture of a stall selling hundreds of sealed Ali Express parcels with the caption: “This is where your lost parcels end up.”

This AliExpress stall is flooded with customers today apparently because of my post. Haha (a friend sent this image to me today) pic.twitter.com/nS7vte5KAb

His tweet went viral, with many calling out Pakistan Post for failing to deliver the parcels. However, officials were quick to refute the accusations. Saleem was contacted by an assistant superintendent of Pakistan Post who claimed that the matter had been investigated and the parcels did not belong to Pakistan Post, since they handle Pakistani addresses only. “Seems like these have been purchased from out of the country as refused articles and then imported as second hand material,” he said.

Update: I received this today from Ghazanfar Abbas (Assistant Superintendent at Pakistan Post, Rawalpindi DMO): "The…

Many curious and concerned residents visited the stall and saw that the parcels were in fact mailed to other countries.

Posted by Viral in Newsfeed on Sunday, September 16, 2018

This might be a case of importing scraps from other countries like China. Pakistan’s scraps import jumped by a staggering 200% to 46,992 tonnes in 2017 mainly coming from countries like Britain, Belgium, Canada, Germany and Saudi Arabia despite strict policies by the government, according to a Dawn report.

Earlier, China was considered the biggest importer of garbage and scraps from other countries but after it halted doing so, a lot of percentage of these imports were directed towards Pakistan.