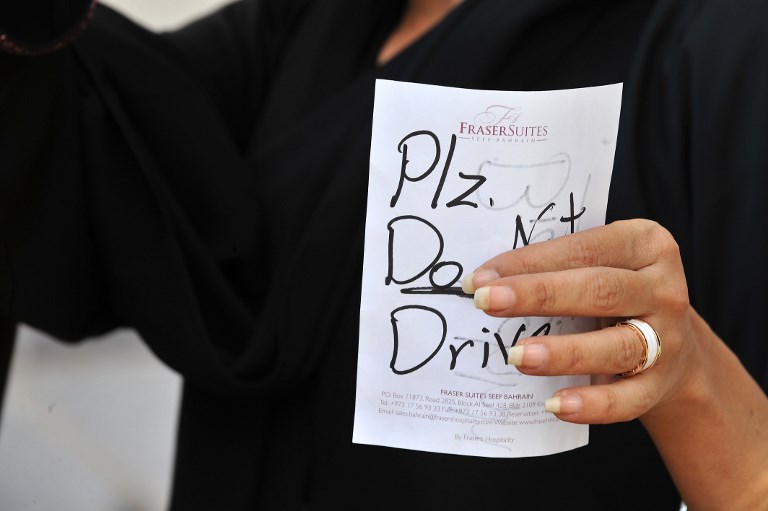 Saudi Iman al-Nafjan holds a note which she says was placed on a family car as a warning after she drove in Riyadh. PHOTO: AFP

KARACHI: Saudi Arabia has announced it will punish online satire that “mocks, provokes or disrupts public order and morals”.

The BBC reported that anyone producing or distributing such material could face up to five years in prison and an $800,000 fine.

Speaking on the condition of anonymity, an official of the Saudi government told us, “The issue of satire first came to our notice on social media. People kept tweeting stories about our country with the #NotTheOnion.”

The Onion is an international publication which only writes satire news. The hash tag #NotTheOnion is often used for stories that are thought to be unbelievable or absurd.

“We are talking about serious new stories like when we made a mistake and killed 40 Yemeni school children in August. We even released a statement saying we regretted it which is kind of an apology if you see it from our POV. Then why you write ‘NOT THE ONION?’” the enraged official said.

The government then decided to put a ban across all actual satire so that people do not get confused between real stories and make-believe ones.

“We even faced this issue when we allowed our women to sit in a car and actually drive. It was so brave. We received praise from men all over the country. But no, people on social media just kept posting ‘is this real? It’s 2018?”

“Yes, habibi, it’s real and you will now know for sure it is real because fake news is now banned. You’re welcome,” the official stated.

The past year has seen a series of reforms introduced by Saudi crown prince Muhammad Bin Salam.

College student Faysal Mustafa, 23, spoke in favour of the recent ban, saying it is a much-needed pre-caution. “We don’t need any more confusion in the international arena. Our reputation is at stake. We are super progressive despite what people say. We have just allowed women to attend concerts and football matches for the first time ever. If people decide to be funny about such matters, no one will take us seriously”.

The crown prince in response to praise of his reforms regarding women rights said, “We have come a long way and have only a short way to go.”

“Like the prince said, just a short way,” said the anonymous official. “Meaning we might allow women to go to the beach maybe or to a restaurant alone. Who knows? Exciting times.”

“We don’t need humour to ruin everything.”

This story is a work of satire