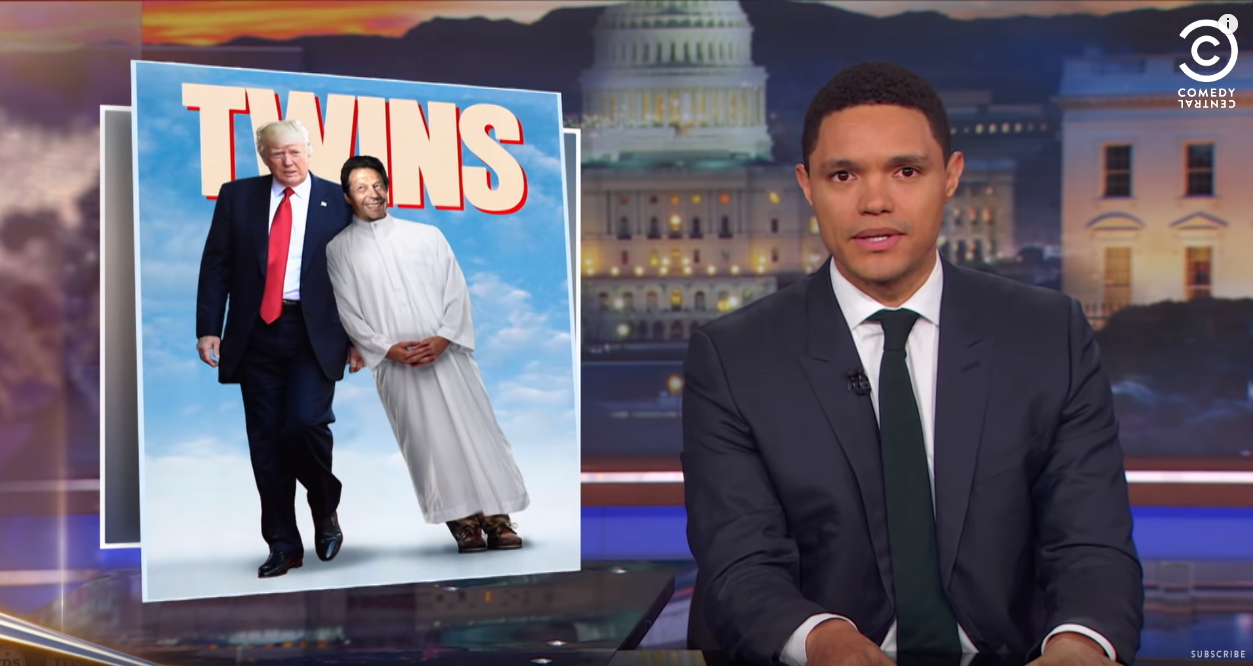 KARACHI: If you haven’t been living under a rock for the last couple of hours then you may have already heard of the latest episode of the The Daily Show. Why this is relevant to Pakistan is because South African comedian-TV host Trevor Noah dubbed Prime Minsiter-elect Imran Khan as Pakistan’s Donald Trump. Using footage from their interviews and speeches, Noah got funnier with each point.

“When Trump was doing Pizza Hut ads, Khan was in ads for Pepsi; Trump had three marriages in the tabloids, so did Khan; Trump thinks Islam is bad, Khan lives in Islam-a-bad,” remarked Noah, sending the studio audience into roars of laughter. He also compared their privileged past, political experience and their ways with the ladies. But all in good taste.

1. Obviously Khan’s fans were not happy

@Trevornoah I really want you to get your facts straight about Imran Khan. He is the most popular politician in Pakistan. Comparing him with Donald Trump it's an insult to Pakistani people. pic.twitter.com/YlI2qbTv1a

I've lost all respect for Trevor Noah after watching him compare Imran Khan to Donald trump. It's so easy to make a Pakistani look bad when the only videos you've used to describe him in ur segment are American based. Fuck you @Trevornoah

According to the self-proclaimed Pakistani "liberals", Imran Khan is:

What and who is left? Baghdadi, OBL, Genghis Khan, Jack the Ripper? #DesiLibs pic.twitter.com/dUA3q5uNFk

@Trevornoah Pakistan has struggled 2 find a person who only stands up for people of Pakistan. Cmprng him 2 Donald Trump! That’s just beneath u. We finally have some change. We can only hope for the best! This is my change! #BoycottTrevorNoah to All Pakistani Living in USA pic.twitter.com/4Dy1fRnptr

2. On the other hand, Khan’s non-admirers found this comparison quite funny

3. Some saw the comparison for what it really was: satire

Trevor Noah’s take on IK is purely satirical. It should be taken as satire. Watch it, laugh, move on.

Trevor Noah is a comedian. This is what he does for a living. We should not be getting upset at his piece on IK.

4. While others dismissed it altogether

So, crazy Youthiya invective against the Daily Show aside, I feel like this Trump-Imran analogy is a bit forced – and @trevornoah hardly the first to do it. It's almost like news media, obsessed with Trump, sees everything through his prism, cannot fathom plurality of reality.

5. But most were just there for the entertainment, waiting for Twitter squabbles to erupt between supporters and non-supporters of Khan

Dear @Trevornoah !! You have offended my Pakistani brothers and sisters who are obsessed with Imran Khan and his white-skin supporters like @Jemima_Khan and Cynthia Dawn. 😂😂

You are neither white nor woman, so no forgiveness for you. 😂

After watching this Insafians all trying to figure out a link between Trevor Noah and Maryam Nawaz https://t.co/unPx3AIaTF

Oh no, what have you done!
Fasten your seatbelt, @Trevornoah – if you thought MAGA/Trump trolls were bad, here come the Naya (New) Pakistan/Imran Khan trolls 🙂

All in all, it was a good day for Twitter!