Protestors show up at the film's promotional event as well 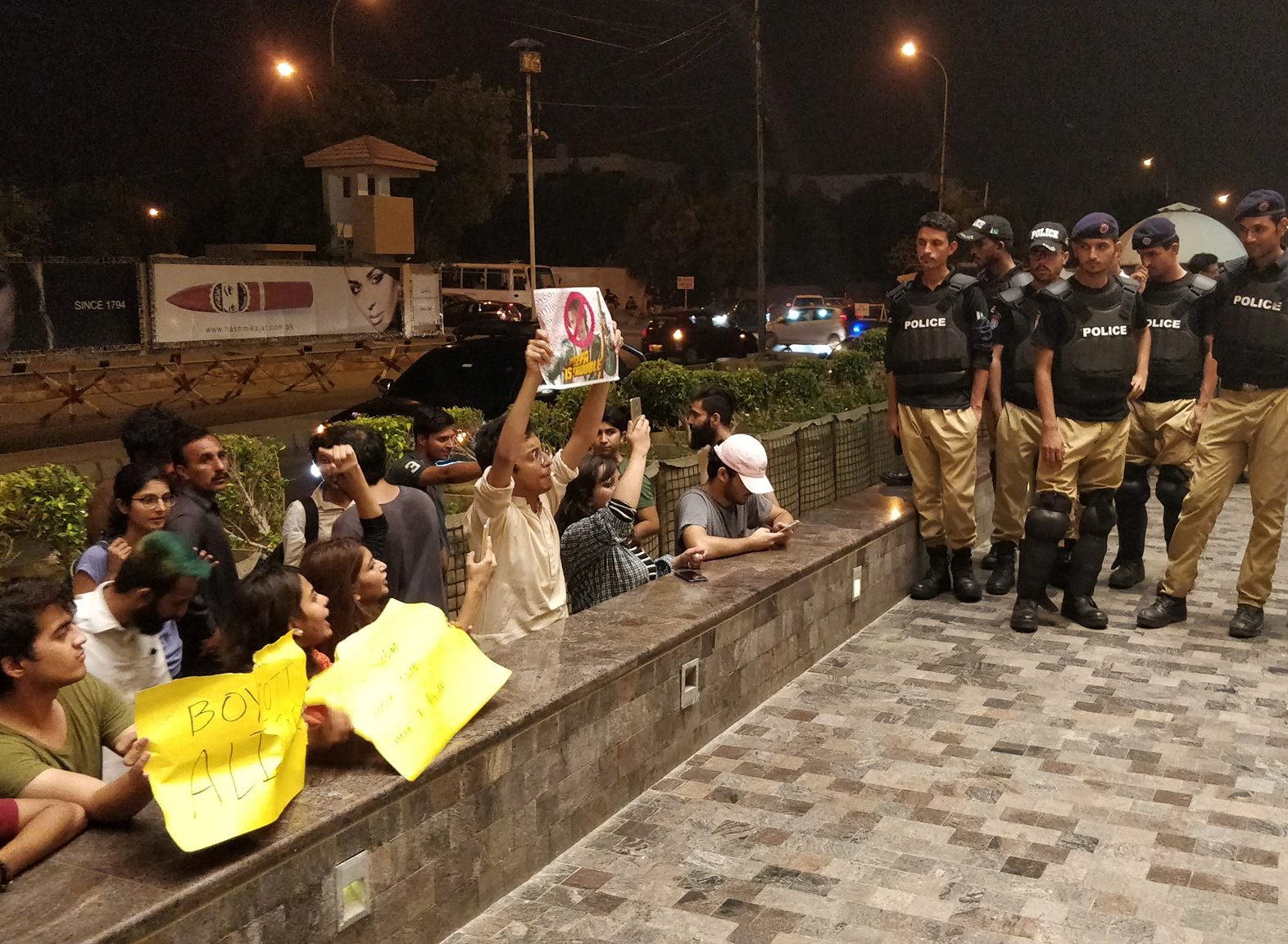 KARACHI: As the car pulled up, Ali Zafar could be seen calmly arriving at a meet and greet session at KFC a day before the big premiere of his upcoming film, Teefa in Trouble, where he was confronted with a modest but loud group of protestors who stood in front of his car, chanting slogans, carrying posters that said “Boycott Ali Zafar” and “Teefa is Trouble.” His team had organised the session for the star to promote his film.

Ali Zafar was supposed to do a promotional event for his film at KFC. When he reached, this happened. pic.twitter.com/142oh3acDO

Immediately, Zafar’s managers and PR team rushed to remove them. They first tried to push the protestors away and then eventually tried to strike a dialogue. Zafar was whisked away to the inside of the venue, while the group of youngsters, mostly men, stood outside the windows of the eatery till eventually deciding that their statement had been made and recorded.

“Pakistan needs to know that it’s citizens and it’s youngsters have had enough of this and will not tolerate sexual harassment against women,” one of the protestors, Zulfiqar Mannan told Cutacut at the venue. “We decided to hold a protest when we saw that KFC was shamelessly supporting a man who has been accused of sexually harassing several women.”

Read: Opinion: Why I’ll be boycotting Teefa in Trouble

The next day, social media was buzzing with the sounds of a bigger demonstration taking place outside Nueplex, where the film’s premiere was scheduled to take place. Around 7 pm, protestors started arriving and this time in much larger numbers than the day before. The group, consisting of 30 young students, more men than women, made their way inside the mall where they began protesting. Soon after, the mall’s security removed the protestors, even attempted to snatch their cell phones and forbid them from making videos, according to several protestors. The guards tried to stop bystanders from making videos as well.

Eventually, the protestors huddled at the entrance of the mall, chanting slogans. “Auraton ka yaqeen karo, Teefa ko boycott karo,” they could be heard chanting. “One in 5 women in Pakistan are sexually harassed,” shouted another.

However, things eventually took an ugly turn when a bystander from the mall came to the protestors and handed them two tickets to the premiere, so that they may continue their demonstrations inside. As the protestor tried to enter the mall, he was stopped by the guards and not allowed to go inside. Without citing official reasons, the guards said “The cinema is booked, your seats have been occupied, the film is almost over” to deter the two youngsters. As the mall’s guards and police officers started to surround and intimidate the two young men, more protestors started crossing the barrier of the mall and joining the scuffle at the entrance of the mall.

Eventually things got heated between the mall’s guards and the protestors, who kept trying to enter the mall despite being asked to continue their protest on the street instead of causing a disturbance on the premises of Nueplex. Physical force was used to remove the protestors, who eventually then backed down and went back to the road. Police and the management of Nueplex remained unavailable for a comment.

Around 10pm, the crowd started to disperse. Visible amongst the crowd was Sadia Khatri of Girls at Dhabas, who also attended the protest to show solidarity with the cause.

Further protests are expected in Lahore tonight as well.