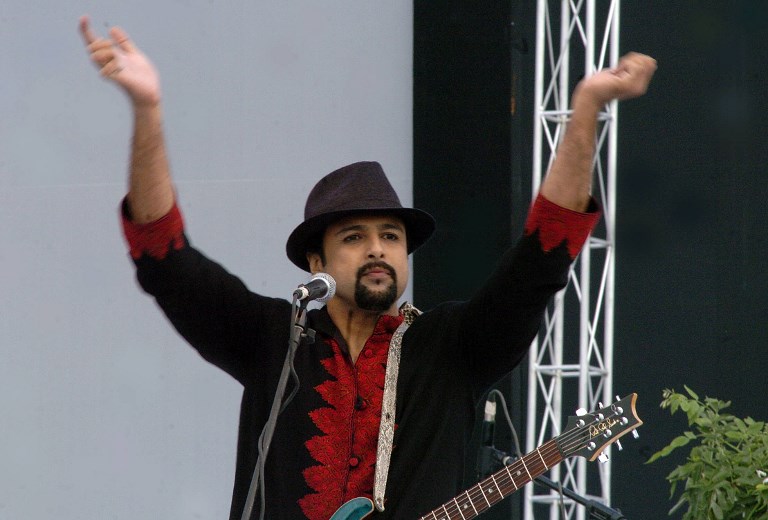 KARACHI: Following the sentencing of former prime minister Nawaz Sharif and members of his family in the Avenfield Reference, many took to twitter to either celebrate or denounce the landslide verdict. Pakistan Tehreek-e-Insaf followers seemingly lead the celebrations, but one member may have crossed the line.

Former Junoon musician, who prides himself as a Sufi and a PTI member, tweeted a photoshopped image of Nawaz’s daughter and politician Maryam Nawaz with PTI chief Imran Khan.

The text in the image says: “I’ll never, ever, ever let you go. Try and stop me if you can.” Another line at the bottom of the image says, “If I run away with you, will you leave my father be then?”

The now deleted tweet caused a lot of backlash and screenshots of it are still making rounds on social media. You can can view it below:

Salman made further derogatory and downright sexist comments about Maryam and continued to receive backlash over them.

a Sufi, professor & a peace activist saying so. no wonder y Sufism, education & peace is at stake Excuse me Mr @sufisal u r nt allowed to call out any woman in this way
U must apologise @MaryamNSharif
P.s: u can't b anything in ur bio if u endorse patriarchy#GE2018 #MaryamNawaz pic.twitter.com/nxPG5tOYdY

Salman Ahmed's tweet about Maryam is a reflection of that deep-seated misogyny that comes camouflaged in notions of misplaced honour & overbearing patriarchy: attack & demean your rivals & enemies through the character of their women.

After the social media uproar, Salman deleted the tweet but wrote another one to defend his stance.

Many pointed out that Salman was also encouraging violence against former Nawaz and his daughter Maryam who are currently in London, where Kulsoom Nawaz is fighting for her life in a hospital.

Kudos to the British citizens in London who broke down the door of convicts Nawaz Sharif & @MaryamNSharif. You have no place left to hide.

Nawaz & @MaryamNSharif are convicts & law breakers.citizens have the right to use necessary force to apprehend them https://t.co/khh48LRs2O

An angry mob attempted to attack #NawazSharif when he was entering his son’s residence in #AvenfieldHouse ,days after Islamabad accountability court sentenced the ousted prime minister to 10 years in jail in the #Avenfield properties corruption reference. pic.twitter.com/o0eezj4QV6