Both official election anthems were released on the same day 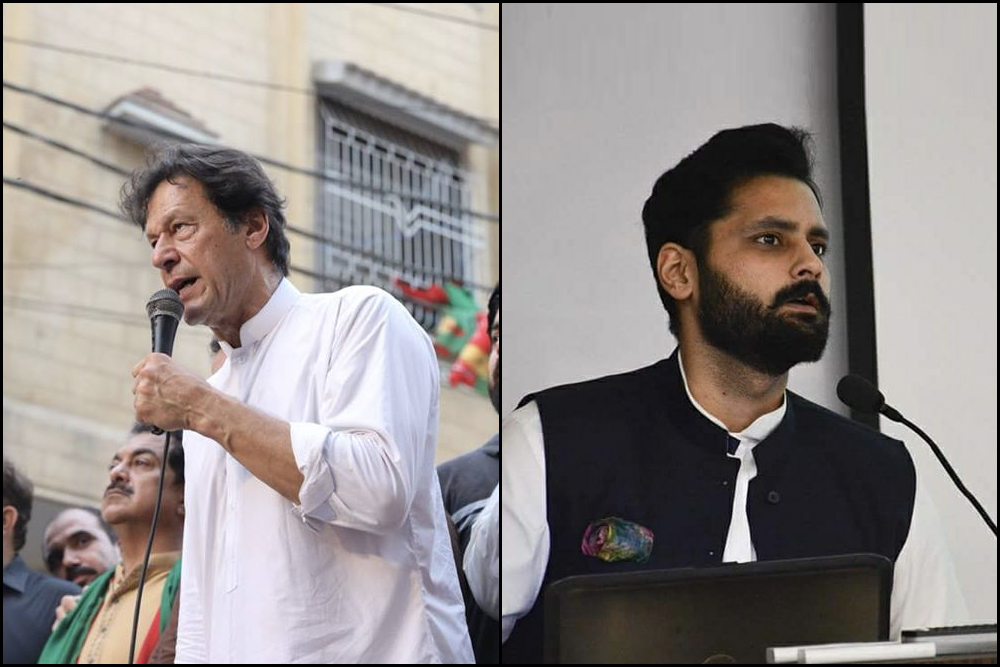 KARACHI: The elections are upon us and so are two official anthems from two candidates. While there can be no comparison between Imran Khan, who’s running for the Prime Minister’s seat with the weight of his party, the Pakistan Tehreek-e-Insaf (PTI), behind him, and Jibran Nasir, who is contesting for a National Assembly seat as an independent candidate, both candidates coincidentally released their anthems on the same day and that’s why we’re comparing the two.

Sung by Farhan Saeed and directed by Murtaza Marri, Khan’s anthem, titled ‘Ab Sirf Imran Khan‘ seems like it is made just for him, not his entire party. The video features various shots of the country and of Khan and his jalsas. The song’s lyrics talk about Khan’s vision to offer affordable healthcare for all, ensuring everyone’s rights and to eliminate homelessness, hunger and unemployment. The song also sheds light on the external debt of the country; apparently Pakistan has seen an increase of 47% of foreign debt in the last four years.

Technically, the video and song are very weak. Considering that this is the party’s official anthem, the song isn’t energetic enough. Visually, it’s comes across that the video has been made using archival footage, and because of that, it doesn’t have a strong impact. It fails to make a statement, or offer anything new.

All it says is ab sirf Imran Khan. Forget about the rest of his party (it’s almost like he’s an independent candidate)

The video also includes images of Mashal Khan, Shahzeb Khan and Naqeebullah Mehsud among others. What this symbolises is Nasir’s fight for the downtrodden, the underdogs. The song talks about inclusion of religious minorities and harmony between Hindus and Muslims, for instance. It also talks about the importance of trans rights and supporting those with disabilities; everything he has stood for all these years.

It also helps that visually, the video is stunning. Brilliant edits and graphics as well. ‘Hum Mein Se Aik’ definitely sounds like an anthem and not a romantic ballad.

We are happy to release our campaign anthem Hum Mein Se #Aik. The anthem is a labour of love made possible through the support of friends, colleagues and supporters. The creation process of this song represents truly represents the campaign. It is by the people for the people. Though Mohammad Jibran Nasir is contesting as an independent candidate with the campaign naturally focusing on a single person however the lyrics of the anthem do not praise or even mention Jibran opposed to majority political songs which celebrate personalities instead of propagating an inclusive ideology. That is our message to promote ideologica politics as oppositing creating another cult with blind following. The anthem speaks about the struggles of the common man and highlights the injustices of current political incumbents while at the same time stressing on the need of self propelled leadership from amongst the masses. We have been taught to seek change from the ruling elite whereas we need to be the change. We are the change. The video of the song include diverse participants belonging to different walks from life with different backgrounds. There are actors, activists, cultural icons, students, and atheletes featured in the song all highlighting their struggles and triumphs as part of our society as part of "hum". From Labour rights activists Like Nasir Mansoor to gender rights activists like Mahnaz Rahman and Kami Sid, from icons like Bushra Ansari to younger talent like Faiza Saleem, from activists for Citizens with special needs like Imran Lalani to atheletes from the Special Olympics Team to a courageous and inspiring voice like Khadija Siddiqui we are proud that our society has such vibrant individuals who together are changing Pakistan for the better everyday. Irrespective of their religion, caste, creed and gender, the Pakistani people have to unite as one as that is the key to our progress.Though some people may feel that one person is not enough to change the system, we believe that once we are united as one there is no challenge that we cannot overcome. Hum Mein Se #Aik not only propagates that we hope to elect one of us into the Parliament, but also hopes to empower more individuals to take upon this responsibility to represent their fellow citizens.In our efforts to strengthen this pillar of our State, we hope that we can help our voters understand that they need someone who empathizes with their struggle to represent them.In this spirit, this is song for the farmers, this song is for lady health workers, this song is for transgenders, this song is for youth, this song is for every movement which produces leaders from amongst its own ranks. We hope that one day, the political climate of our country enables every willing and able citizen to contest elections and correct this imbalance of power. Come join us in spreading this message and help us mobilize our fellow citizens to take charge of their future.SPECIAL MENTION WITH GRATITUDE: Sheikh Mubeen Ul HaqMUSIC VIDEODIRECTOR: JAMIPRODUCER: FAIZ ZARDARIEXECUTIVE PRODUCER: NAZIRA JAMIASSOCIATE DIRECTOR: SAIMA SALEEM1ST A.D: JAFAR KAZMI2ND A.D: DANIYAL ASADDOP: FARHAN HAFEEZGAFFAR: ANWAREDITOR: BILALAC: ASHRAFFOCUS: NOMANKHAYYAMDATA CONVERTER: EHSUN FAROOQUILINE PRODUCER: TAHURA ABIDASSISTANT PRODUCER: SIJAL REHMANE/SAMIART DIRECTOR: ERUJ HADISTYLIST: VARDAH AZIZASST STYIST: ISAACMAKEUP: NABILASVIDEO EDIT/GRADING: BILAL HABIBPRODUCTION MANAGER: MEHMOODTRANSPORTER: PARVEZCATERING: LAZEEZ CATERINGPRODUCTION BOYS: BALLU, FARIS, ABIDPRODUCTION TEAM : AZAD FILM TESTIMONIALSDIRECTOR: SOHAIL JAVEDPRODUCER: FAIZ ZARDARIEXECUTIVE PRODUCER: NAZIRA JAMI1ST A.D: AMMAR SOHAILCREATIVE HEAD: ALI HAYAT D.O.P: NABEEL JAVED QURESHIFOCUS: WAQAS YOUNUSPHOTOGRAPHY: JAFFER HASANSOUND: ABBY INC.SOUND RECORDIST: QIRAT KAZIA.C: AKBER QURESHIA.C: IRFANBTS: HAFIZ AND NADEEMSONG – HUM MEIN SE AIKMUSIC PRODUCED BY: AHSAN BARI AND ALI SAFEER KHANCOMPOSED BY: AHSAN BARIVOCALS BY: ARIEB AZHAR, AHSAN BARI, ALI SAFEER, NATASHA BEYG, SHAHRAMLYRICS: ALI HAYAT RIZVIMIXED BY: SAAD HAYAT RECORDED AT: ELECTRIK ROOM STUDIOS (Fahad Anjum)GUITARS: SHAHID REHMAN AND AHSAN BARISITAR: WAQAS HUSSAINRECORDING ENGINEER/CO-PRODUCTION : HARRISEND ANIMATION: YOUSUF RAZA AND MASHHOOD JAFFRISPECIAL THANKS TO THE ENTIRE TEAM AT AZAD FILM, SOHAIL JAVED, ELEKTRIK ROOM STUDIO, AND ASAD UL HAQ.TO THE ACTORS, ACTIVISTS, VOLUNTEERS AND CIVIL SOCIETY WHO DONATED THEIR TIME, EFFORT AND EXPERTISE; THANK YOU. THIS COULD NOT HAVE HAPPENED WITHOUT YOU.

Sorry Imran Khan, but Jibran Nasir won this round.